Odd Objects from the Outer Darkness.

A table of six encounters that mark the world as Science Fantasy.

1. A statue of pale blue crystal about four feet tall, roughly human in shape. It is the work of no hand, but the remains of an ancient stellar sailor. Long dead, the spirit within the crystal awakens when it is near the delights of a port. If the statute is carried to any town of reasonable size, the ancient mariner’s spirit will manifest evenings in the form of a hunched being of pure energy. Appearing suddenly in low dives, bawdy houses and cheap burlesque shows it will snatch drinks, dance on tables and sing raucous songs in an unknown language. Unfortunately the spirit’s singing causes fires and explosions. 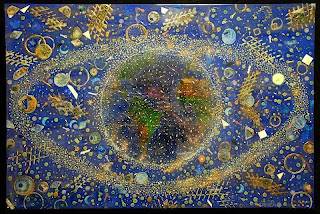 2. Sand encrusted and fused this mass of tubes, levers and gears weigh three hundred pounds. The corroded purple metal of the exterior can be hammered away easily enough, flaking off with a sickly smell like rotten fruit, and revealing a gleaming mass of ultra-dense metal within. Enough of this strange alien material exists to forge an object of useful size, a sword blade, helmet or drinking vessel. Such an object would surely be magical, but the metal cannot be melted in a normal forge, requiring magical electricity to work.

3. A raised disk of black glass scoured by the winds six inches thick and covering a mile diameter circle. The surface is scratched and grooved by ages of dust and wind, but it is still difficult to walk on and during the day sunlight reflected off of the glass surface is blinding (while on the glass, save each turn vs. DEX to avoid painful 1D2 HP fall, and save vs. wands each daylight turn to avoid blindness for 1D2 days). At the center of the expanse is a cracked crater containing the jumbled petrified bones of a giant winged humanoid.

4. An orb of opalescent pink nacre about the size of a baby’s skull. Too lumpy and scored to be really valuable, this curio is from the other side of time, the deathless black voids beyond the moon. It is an egg, the casing from the hatching of a psychic predator long wandered off. For those with ethereal vision, the egg tooth of the predator may still be found hanging above the orb, and may be grasped. Wielded as a dagger the egg tooth has the ability to cut creatures and things in spaces between worlds. As part of a ritual the tooth might tear open reality and create a rift to somewhere else entirely.

5. Plates of local stone, planed smooth and then etched with characters that still gleam, this is the log of an ancient castaway, marooned when the world was young. It can be read with magical aid, but will reveal nothing of value, only a haunting story of a creature (certainly not a man) cloven from his home and struggling pointlessly to survive on a world of ugly vegetation and crude clumsy life. Reading the entire thing will cause ennui and a corresponding 1 point penalty to future saves against anything deadly.

6. A sheltered dell is filled with beautiful flowers, tiny and varied, each one sits atop a maroon succulent stilt. The flowers produce a scent intoxicating and sublime one moment and a reek of burning iron the next.
Posted by Gus L at 12:03 PM