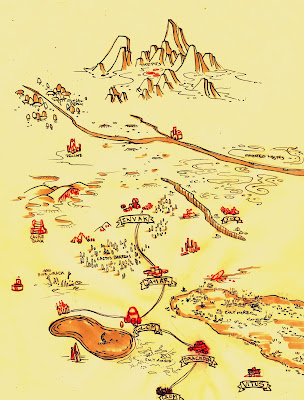 So I haven't stopped making stuff for Table top games, I'm working on a few projects these days, and thought I'd share some of the map art I've made for them, and for other purposes of late.

First, A map I drew of the local region the "Master's of Carcosa" game I play in occasionally takes place in.  Run by my friend over at Save Vs. Total Party Kill, it's a pretty fun game.  A very open sandbox, that is becoming the most pro-social and optimistic game I've seen in a while.  Despite, or perhaps because, the GM has given the players a great deal of leeway, and  the setting is so amoral - filled with casual genocide, violence, theft and cartoonish depravity, the characters (a troupe of actors/con artists) have a become heroic civilizing force for peace.  Currently we are operating out of Invak, a Boneman lizard herding village that grudgingly accepts non-Bonemen refugees.  Jahar to the South, a Brownman trading city is on the verge of making an alliance with Invak due to player actions.  Much of the Southern map remains to be explored.

The Second Map here is an unlabelled map of a Fallen Empire river town.  The town (Mire? Rivertown? Tradefork? - Fallen Empire names are descriptive, not fantastical) is built up on sunken Imperial barge hulls, and pilings.  It's all recent wooden construction, wealthy and well protected thanks to the swamp and the grounded hulk of an old monitor which still has some working arcane weapons aboard.  I think this place may be the "point of light" in an adventure I've had brewing in the back of my head for some time.


The last item here is a map illustration/elevation/isometric projection/blah blah/whatever for a location map.  The location being the 'ruins' of a late Imperial era hunting lodge deep within a corrupted wood.  The lodge should be 3-4 levels and present an interesting set of challenges. I still need to draw out the interior maps and key most locations, but the project is going fairly quickly, though I am unsure if I'll PDF it or maybe even publish it somewhere.