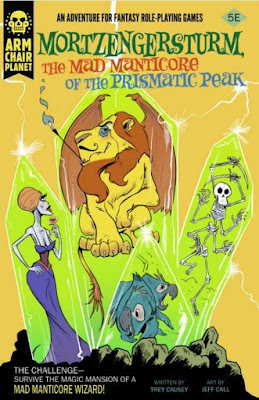 Two things come to mind when looking at Prismatic Peak, and thinking about the current ‘OSR’ or ‘DIY D&D’ subculture.  First is the problem or question of ‘personalities’ and second the perennial issue of fidelity to the implied setting of D&D.  Trey and Sorcerer’s Skull are not a ‘personality’ in the DIY D&D scene, but they should be a presence - Sorcerer’s Skull has been one of the most consistently updated blogs about fun and strange imaginative table-top games since I started playing again in 2011, and Trey’s published works (most recently Strange Stars, but most notably for me Weird Adventures) are consistently high quality, and consistently approachable.  They aren’t complexly written, difficult and literary like some other authors, but they are written with verve, humor and a deep well of pop cultural appreciation.  None of these products or their author courts controversy, either to stir up sales or out of some personal need for drama, but the product is still well-crafted with a unique authorial voice.  I think Trey’s attitude is well paired with the Hydra CoOp, who have consistently produced high quality location based adventure books that remain playful and unique while not abandoning the traditional ‘mood’ or play-forms of classic D&D.
Prismatic Peak goes further than most Hydra’s offerings, with an authorial voice that is ‘gonzo’ to a degree that I haven’t seen much lately in the ‘OSR’.  The ‘Lands of Azuth’ don’t seem to take themselves seriously, and the content reminds me a good bit of Anomalous Subsurface Environment in that it’s clearly a Saturday morning cartoon sort of setting (though Azuth is more Tex Avery or Looney-Toons to ASE’s He-Man and Thundarr).   There’s something humorous and childlike about Prismatic Peak, with a sort of late 50’s/mid 60’s approach - a lot of winking references to the adults that might be watching/playing among something that is basically light-hearted and childlike.  I should emphasize that this is the feel of Prismatic Peak - the locations themselves create a potentially teetering social/faction puzzle with the titular villain trying to politely trick the players into allowing their characters to be eaten as they attempt to steal from him.  Prismatic Peak is at its core a zany heist scenario in a mad wizard’s lair filled with chimeric experiments.

‘Gonzo’ was a setting element that was regularly praised a few years ago as a popular playstyle for ‘old school’ or high lethality games.  From what I can tell it’s the opposite (but perhaps not the inverse) of ‘grimdark’. Currently Dungeon Crawl Classics is often regarded as ‘Gonzo’, and for me the ultimate gonzo setting is Anomalous Subsurface Environment.  That is to say that while the characters in a gonzo game might die terribly just as often as they will in a ‘deathcrawl’ and are faced with a series of equally bad choices just as they would be in a ‘nega-dungeon’ gonzo games present this under a humorous gloss.   To use old examples, in ASE  a swarm of miniature ‘Sleestacks’ will tear your heroes to pieces rather than the armies of unshriven cannibal child zombies one might find in Death Frost Doom.  Prismatic Peak is on this same continuum - the main foe is spell caster manticore wizard who looks an awful lot like a combination of Scar from the Lion King and the 1950’s English character actor Terry Thomas (or possibly Vincent Price).  Despite his inherent bombastic silliness Montezengerstrum is still a 69 HP, mid AC, multi attacking melee combatant who can cast cloudkill and lightning bolt.One of the things that’s interesting to me about Prismatic Peak is the particular variety of gonzo it brings.  While one could theoretically drop the Peak into Anomalous Subsurface Environment’s Land of 1,000 Towers, it’s still not quite the same kind of deadly/funny.  Azuth (or at least Prismatic Peak) have a zany fantasy feel, and even while there are robots or automatons in the world, it’s not science fantasy, or at least not 80’s Saturday morning science fantasy.  Azuth seems to draw influence and visual cues from looney-toons (Montzengerstrum’s collection of bizarre crossbred creatures fell very much like something Marvin the Martin would covet) the overall feel of the setting also has a strong Wizard of Oz or even Fairytale influence.  Whimsical and strange things like the snail elevator that will bring the party to the Manticore's lair and the goblin vat that produces blue downtrodden goblin servants through some kind of mad science, industrial process might just be metaphors for an obscure bit of interwar Mid-Western politics.It’s a daring departure from grimdark dungeons dripping with slime or even from the high fantasy of most WOTC products, especially for something written for Fifth Edition, where a humorous adventure like Prismatic Peak might be doomed by the vast reserve of newer and less adventurous players who really want to play something like Lost Mines of Phandelver without chatty monsters, funny traps and absurd situations.  Perhaps however, because there are so few decent third party fifth edition adventures available, Prismatic Peak can find an audience and bring more players into the DIY side of the hobby.  Certainly it provides the tools (colorful pre-gens and a single session/tournament style quest) to play as a one shot.