Contest Winners! - Tomb of the Rocketmen

My Tombs of Rocketmen contest is done and I was so pleasantly surprised by the outpouring of maps from the internet RPG community - I will not say the OSR community, because it looks like some of the best maps are from folks outside that/my particular circus.

Since I got such a good response I've decided to provide two prizes.  First, one for "Overall Best Map," and second one for "Best Classic Map".  This was a close contest, there's plenty of maps I would have really enjoyed stocking, and I can see a level of excitement and craft in all the entries, so please, even if your map isn't a winner, consider keying it (some folks already did and great ideas are contained within) because a Necropolis of the Rocketmen is better than a single tomb!

Without further delay - below is the winning submission, whose fungus infested verticality and amzing detail got me really excited about designing a Tomb largely submerged beneath a fen and filled with all manner of alien infestations, bizarre archeo-tech (matter transmitters! commune-ication crystals!) and ornate chambers. 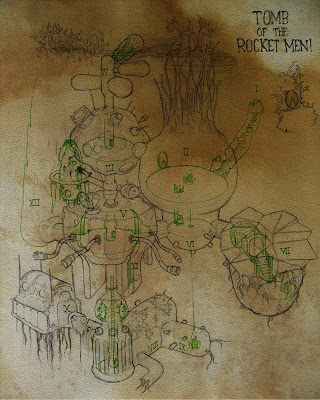 Logan Knight, clearly a skilled artist, lacks a blog or other web presence, but still found this site and provided this amazing map.  Yes it's isometric and very pretty, but it contains several elements that made me enjoy it as a map as well as an art piece.  1st it has a couple of entrances - an airlock in area XII, the ability to break into the pods in area IV and a hatch in area I.  2nd there's a few different paths through what is largely a vertical structure, and the matter transporter in area II allows a certain split between the dragon lair in area X and the space fungus infestation in areas III, V and XI.  Anyhow I adore this map, as it practically writes itself, and includes a creepy 70's science fantasy feel more than a 50's retro futurism.

Before moving on I want to call attention to another great isometric map - a bit simpler perhaps, but with a similar attention to detail and plenty of inspirational items that appeal to the designer is one by J. Burnett of Bernie the Flumph a blog that I am glad to have now discovered.

Other great side view maps were provided by Carapace King, and Metal vs. Skin .
Both of these maps would have been hard to key however, because of their one dimensionality, still they're awfully nice to look at.

While these were certainly the prettiest maps I received, there were plenty of other great maps in a more classic (and arguably more usable) style.  Sky Full of Dust and Pilgrim's Guide to the Zeitgiest went all out with very classic full color maps, while LS at Papers & Pencil did a big map that pleasantly reminded me of my own penciled maps of the late 80's (as well as being quite usable).  I would be remiss if I didn't point out Tower of the Archmage's map, which has a great amount of detail to go with a more comic-book take on the classic style:


Several entrants used the TSR style blue background, and clean lines of early module design, the most impressive to me by a mysterious M. Sorensen:

Judging all of these was hard, they're all worthy maps, but the winner of the classic map category, who will also receive a copy of an ASE book, is Brendan, late of Untimately, and currently writing Nercopraxis. 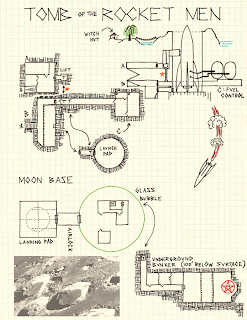 His map wins, not just because it's a clean, exacting map of a believable rocket silo, but because it was the only submission to include a rocket with a place to go! A rocket must be more than a tower within a silo, it's a chance to send the party to a cult haunted moon base of course!  Because of this neat adventure element I've given Brendan the classic map award.

Again there's something a bit arbitrary about these winners, when there were so many good maps.  I wanted to link all of them, and give everyone a copy of ASE - but alas I lack the resources for that.  I will be running other contests in the future, so keep your pencil's sharp.

Additionally, expect updates on Tomb of the Rocketmen.  The main art pieces are done already, so now I just need to write it!
Posted by Gus L at 11:16 AM