The HMS Apollyon is a ruptured environment, while the general questions of what seas exactly it sails, and how long its been adrift cannot be adequately answered, it's clear that the space and time it exists in are not normal or natural to it and the majority of life aboard the vessel and has some strange effects.  The long noted time dilating effects - decay is both strangely slowed, accelerated and possibly even reversed aboard the ship, at seemingly different rates depending on what happens in a given area - are coupled with a a susceptibility to magical influences and a certain animism that infects almost all objects aboard the vessel.  Besides the tendency for bodies that are improperly laid to rest to reanimate or leave dangerous necromantic entities behind, and the ease that Outsider entities can force themselves (or be invited) aboard the Apollyon, there is a third category of manifestation - elemental spirits.  Elementals are common and varied aboard the Apollyon, and like anything useful, the hulk's inhabitants have made use of them to increase their own powers. 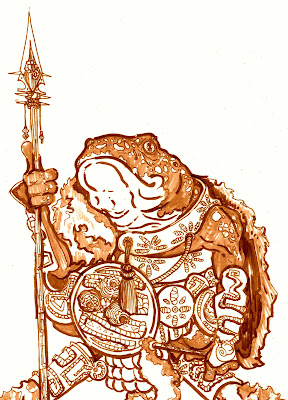 The principal known practitioners of elemental magic aboard the Apollyon are the Froglings, both Sterntowers and the uncivilized tribes within the hull.  Water and earth shamanism and elemental magic form the basis of traditional frogling culture, and it is likely that much of the knowledge Froglings have of these disciplines predates their time aboard the Apollyon.  Yet the Apollyon's highly magical environment, while most often malicious, has enabled contemporary Frogling practitioners to raise the art of elemental magic to unexpectedly high levels.  While not all Froglings are accompanied by an elemental familiar, many are, and the rulers of Frogtown are a circle of powerful water and earth shaman, each of whom has formed a symbiotic relationship with a powerful elemental that the shaman constantly seeks to make stronger by feeding them lesser elemental creatures and using totems and sigils to supplement their elemental's natural powers. Human magicians, mostly outside the summoning traditions of the passenger caste, have also turned to elementalism on occasions, but most often consort with fire elementals rather than earth and water, perhaps as a way to avoid any appearance of competition with the more powerful frogling practitioners. Below is a brief description of the Elementalist wizard and Frogling class skill set.

Wild elementals also abound, though they tend not to be 'pure' elemental forms of the cardinal elements (Earth, Air, Fire & Water), but rather strange para-elementals formed of the unnatural environment of the Apollyon.  these creatures are almost always hostile and are hunted by elementalists as feeding on their essence will allow 'pet' elementals to grow in size, power and intelligence.

At 1st, 4th, 7th and 10th level arcane magic users may decide to study the discipline of elemental magic (froglings being limited to only three magical disciplines: elementalism, shamanism and vivimancy).  Once picked a skill increases in rank (form 1 to a possible 4) whenever a new skill granting level is reached.  Thus a 4th level Frogling elementalist, who had decided to supplement her study of earth magic with vivimancy (healing magic) at 4th level would be a rank 2 elementalist and rank 1 vivimancer.

Elementalism's principal focus is the caster's symbiosis with an elemental creature.  This relationship grows as the level of the caster progresses, as the caster's ability to control and regulate his allies' power increases and allows the elemental to grow in size, ability, prowess and intelligence at each rank.  An elementalist must first pick which of the four cardinal elements they will ally themselves with: Earth, Fire, Water or Air, and this relationship cannot be changed once selected.

If a familiar is killed the caster immediately suffers D6 x 1/2 familiars HP in damage, as the symbiotic link is broken.  Additionally a new familiar may not be summoned for a year and a day, the elementalist gains a level, or the elementalist makes a special sacrifice/performs a special duty on behalf of her chosen elemental ally.  New Allies will appear at the lowest HD of the class of elemental ally they are (i.e. 1, 4, 7 or 10 HD).

RANK 1 - Elemental Familiar.  Creature begins as a 1HD simple manifestation of the element.  About as intelligent as a guard dog, these familiars tend to be loyal, and obedient but only have limited ability to communicate with the elementalist and cannot execute complicated commands. Most often these familiars take on vaguely animal forms (fire dogs, earth turtles, birds made of wind or anemone like water creatures). They have a few elemental advantages over mundane pets (see below), but are not especially powerful.   All share the following basic statistics:

In addition the elementalist gains a -1 to all damage taken associated with his or her chosen element.

RANK 2 - Elemental Protector.  The elementalist is able to strengthen his elemental ally to the point where it becomes almost human in intelligence with combat skill equal to that of a trained warrior.  At this point the elemental will begin to appear bipedal, and vaguely humanoid - often as a crude double of the caster. Though intelligent, these elementals are still awkward in the material world, and this awkwardness manifests itself as a a lack of self direction.

RANK 3 - Elemental Warrior.  At this point in its development an elemental has become used to being a unique being and can be both intelligent and opinionated.  They are generally loyal to their elementalists however as the elementalist's own personality
HD up to caster's (see below), AC 2, ATK 2 (1D6 +2), MV 40', SV (as CL of Caster's Level) SPC (Rank 3 Special Ability)

ELEMENTAL ABILITIES
RANK 1 Special Abilities
All Elementals are immune to sleep, charm, and other mind effecting spells.  They also take 1/2 damage from attacks made by their element

RANK 4 Special Abilities
FIRE: the most powerful Fire Elementals may spit flame as a ranged attack up to 60' away for their normal damage.  Fire Elementals of this level may also create a Wall of Fire (as the spell) once per day.
WATER: Water Elementals can kill opponents with a touch when they become this powerful.  Each elemental will have its over method: instantly desiccating the target, surging into a creature's bloodstream and tearing loose, or poisoning the target with toxins within it's own body.  Whatever the method, the effect is the same.  An elemental's first attack on a target will be lethal should that target fail to save vs. poison.
EARTH:Powerful Earth elementals have developed a bond with their elementalist that allows the partnership to form a single symbiotic entity.  The caster is encysted within the elemental, protected by it's AC and hit points, while still able to cast from within.  The elemental may also attack while it carries the elementalist.  Additionally an elemental of this level of power is the equivalent of magic armor, causing a -1 to opponents chances to hit.
AIR:Air elementals of this size gain the ability to kill targets as an assassin of great skill by rupturing the lungs of any humanoid target they can ambush on a successful backstab attack. Additionally powerful air elementals are so insubstantial that the may flow through any gap at least 1" in diameter.

CARE AND FEEDING OF ELEMENTALS

On a day to day basis an elemental requires on a small portion of its related cardinal element in an inert form to sustain itself (Earth elementals devour rock or metal, Water elementals bathe themselves in liquid etc.), but in order to grow in power an elemental must devour the essence of another elemental of greater power (Hit Dice), after that entity has been destroyed or dispersed.  The Elementalist must be present to channel the defeated elemental's power into his ally, and this is the core of the symbiosis between elementalist and elemental.

Upon devouring another elemental's essence the elemental may take on some characteristics of the eaten opponent.  A water elemental that devours a larger air elemental may become something akin to a steam or mist elemental, while one that dines on an earth elemental will come to resemble ooze, oil or even plant.

As a mechanical effect, an elementalist my increase the hit dice (and abilities) of his familiar or ally by feeding it another elemental.  The elemental will be limited by the lower of either the elementalist's level/Hit Dice or the Hit Dice of the creature devoured.

ELEMENTAL HYBRIDS OF THE APOLLYON

AIR
Smoke- Ghostly figures filed with noxious smoke or fumes, and capable of choking mortal targets or poisoning them with the substance of their being.
Voltaic - Electrical beings made of lightning, voltaic elementals are rare below decks, but often extremely powerful.

WATER
Steam- A hybrid between water and fire elements these bastard creatures are dangerous as they are highly mobile and may suddenly change
Abyss - Strange and powerful elementals formed from the highly compressed waters of the deep sea. Considerably denser and stronger than normal water elementals, any creature captured within them will be crushed by the terrible pressure that their waters contain.
Weed - Elementals that have taken in enough earth essence to spawn life within themselves and are full of algae and weeds.  The plant life perhaps links these creatures more closely to the material plane, but as a practical matter it allows them to choke and entangle in addition to the normal pummeling and drowning attacks of a water elemental.
Blood - Elementals made from the blood of living things are most often evil and hungry predators, seeking to drain the blood of mortals to increase their own size.  Terrifyingly these creatures may force themselves into the bloodstream of a target and cause them to explode moments later in a welter of gore.

Rust - An Earth elemental primarily concerned with decay, rust elementals are colossi of flaking oxidized metal slowly returning to dirt, they are fairly common aboard the Apollyon and have the ability to corrode metal.
Salt - Salt Elementals appear as crystal statutes and are mostly known for thier inscrutability and capability to destroy the undead, even invoking effects similar to clerical spells

FIRE
Ash - Fire Elementals that have "burned out" because of exposure to too much earth or water elemental essence, Ash elementals are forlorn creatures that drift and crawl with great stealth, only to flare into sudden flame, ambushing their victims.
Ember - Burning down in the dark, Ember elementals constantly seek flammable material to impregnate and transform into smaller flame elementals.
Forge - A forge elemental appears as a being of glowing molten metal, and in addition to the solidity and strength of a Earth Elemental their red hot bodies cause instant combustion.  The most powerful forge elementals can also heat and shape metal at will from a distance.