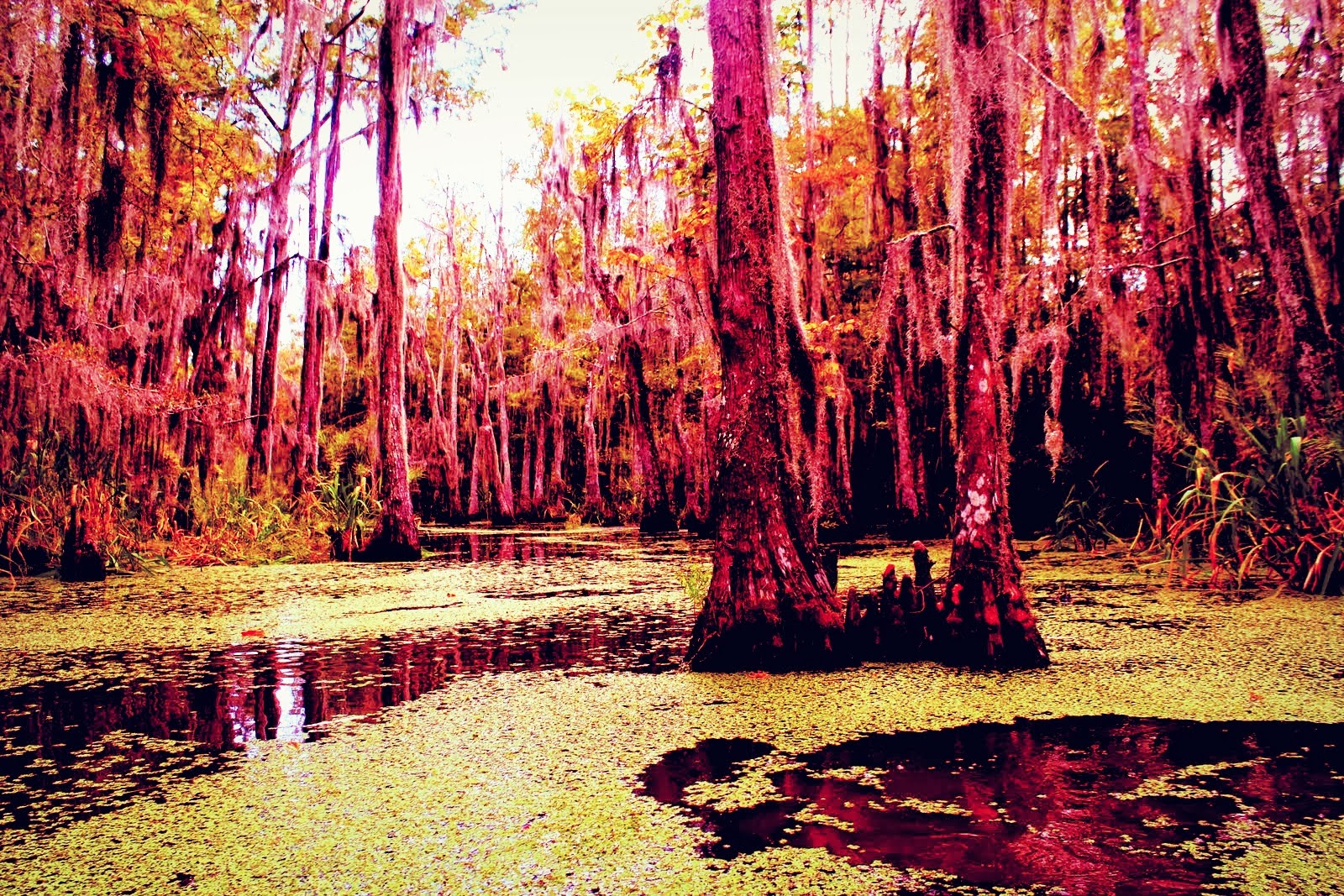 Denethix would have long ago expanded into the Fens, claiming its products and land as it has those of the Certopsian, if it weren’t for the Livid Fens’ inhabitants, specifically its undisputed ruler, the Bone Queen, Fen Goddess, or simply The Witch, a necromancer of extraordinary power who rules the headhunter tribes of the Fens through fear, sorcery and an undead army of unknown size.  The fen witch predates most of the wizards in the Land of 1,000 Towers and her need for power seems less then most as well.  Her writ is undisputed as far as the red weeds and purple lilies of the Livid Fens are seen, but she takes less and less interest in the land beyond.  The Fen Witch’s activities appear limited to producing apprentices who rule her lands directly through terror, and sending out the occasional expedition of tomb robbers to plunder the dead from places of ancient power.  Beyond these activities the Witch seems almost placid, content to grip her swampy empire ever tighter to her skeletal throne and slowly growing capital of Bone.  In the past fifteen years the Witch has even agreed to the creation of an industrial and trade city, the smoky boom-town of Rendermarch at the Fens’ Northern edge, where a Small garrison of Denethix’s Unyielding Fist share the duties of protecting the Froghemoth rendering plants with a much larger contingent of the Witch’s ghost drummers, headhunters and bog wights.

Despite the existence of Rendermarch, and the modern industry it represents, the Fens are a hellish, alien place, wild and without mercy.  The very waters are rumored to be necromantic in nature, and the silt conceals a colossal battlefield warred endlessly over during times both before and shortly after the fall.  Insane machine intelligences, miasmas of toxins, giant carnivorous plants, morasses of undead, and huge amphibian beasts all await the unwary traveler.

SPECIAL RANDOM ENCOUNTERS IN THE FENS

1.   TOXIC POOL - The narrow winding channels leading to this place become increasingly free of weeds as they approach this deep pool of clear water.  Only scarlet algae seems to thrive here, blanketing the bottom of the pool, but failing to conceal some sort of strange bulbous wreck 40’ below.  At night the water glows an eerie blue, but demi-humans will not detect the telltale colors of sick light.  The ancient wreck still leaks a deadly cocktail of chemicals into this pool.  Diving into the water is invariably lethal without proper protective gear (a rubber suit or magical protections). Save vs. Poison or melt each round at a cumulative -1 spent in the water, save at -4 if drunk.

2. STEAMBOAT WRECK - Draped in pinkish moss and almost concealed in a bed of red weeds, this modern wreck of a steamboat out of Denethix was destroyed by a treacherous snag, angry Froghemoth or boiler explosion.  While its design is provides little clue, the ship’s purpose can be determined by more thorough investigation - (1D6) 1-3 Froghemoth Hunter 4- River Casino 5- Military Craft 6- Scientific Expedition. It may still contain treasure in the form of its passenger’s wealth, Froghemoth bones, weapons, or trade goods, and is likely to be the lair of something, assuming that its passengers haven’t returned as bog wights.

3. ABANDONED CHURCH - The Church of the Orbital Gods, or the false Gods that proceeded them, do not fare well in the Livid Fens.  The Witch allows her people to pray to her alone, and the age of burned churches subsiding into the mire mark the history of her power’s expansion.  This church was once of fine stone, now roofless, its entry arch crumbled and altar cast down.  Have it’s dead been set to life to guard it against any who would repair it?  Is there still a golden service hidden under the altar, or does a local snake cult now use the church as a lair for their patron spirits and place of sacrifice?

4. BONE BOG - The water is shallow here, opening into a grasping expanse of grey mud pocked with the bulbs of fleshy violet plants.  Even small canoes will need to be dragged across several hundred yards of dead land.  The mud itself will make a grappling check each round against those passing through, with a Strength of 9, and failure for three consecutive rounds will result in drowning.  Worse the past victims of the mire rest uneasily, and will begin tunneling up when they sense the mire has grabbed a new victim.  Leathery fleshed, mud saturated wights, zombies and mummies will begin to appear in 1D6 rounds to attack any crossing the mire.

5. FLOODED BUNKER - Ceramicrete is almost indestructible, but spotting this ancient bunker was still unlikely as it sits almost buried in red and purple undergrowth.  The upper level of the bunker is awash up to a person’s knees and likely home to some sort of swamp predator, but there may still be sealed doors within, unopened for millennia and filed with technological wonders if not home to violently insane automatons.

6. FROGHEMOTH SKELETONS - Jutting white from a flat bog surrounded by succulent pink grasses the skeletons of two colossal Froghemoths rest entangled.  Each of this titanic beasts must have approached 60’ long when they died locked in struggle.  The bones are valuable, albeit heavy, worth roughly 2,000 Golden Denethix wheels if they can be rested from the swamp.  There is also the potential problem of scavengers: ripper flowers, giant lizards, sail gators and hunting parties may all have gotten to the bones first.

7. CURSED PLANTATION HOUSE – With fallen gables and sagging rafters visible beneath a spray of scarlet moss covered shingles this once wealthy plantation home still has a stately grandeur.  The building, and the now overgrown rice paddies, pineapple fields and incense moss orchards around it have not been reoccupied and lay in abject ruin.  Sensitive souls know a tragedy occurred here once in a single night of blood and sorcery, the only question is what remains: a set of valuable china, the angry spirits of the unshriven dead or some nightmare called into the world in a frenzy of hubris?

8. HANGMAN’S MANGROVE - The vines tangle and twist above this Mangrove in an uncanny way, completely blocking the sun, even over the center of the channel.  It isn’t until a few hundred yards under the canopy that the true nature of the place becomes apparent, and one begins to notice the rotting bodies hanging from the vines.  The entire mangrove is a forest of the dead, and it’s only a matter of time before arboreal residents (Skunk apes, bog wights, or feral headhunters) begin to throwing nooses from above to add to their collection of victims.

9. ANCIENT WRECK – Rusted red alloy that almost blends in with the trees and shrubs surrounding it, only the square manufactured lines of this ancient war machine mark it out from the bogs.  If the wreck is still sealed it may contain ancient artifacts and strange menaces, if it is open it’s likely the lair of some strange beast, horribly mutated by the chemicals or alien wavelengths given off by the decaying machine.

10. ABANDONED VILLAGE – At first this looks like another peaceful village of swampers, huts of grey mud and thatch, neat rice paddies a shocking green against the bruises of native vegetation and a welcoming dock decked with bone rattles to drive the robber birds from the fish drying racks.  The village is empty however.  No sign of its inhabitants remain; their pitiful possessions remain untouched as if set aside for only a moment.  Were they carried off for the Fen Witch’s armies or did some ancient evil from the swamp find them about their daily tasks.
Posted by Gus L at 3:07 PM