The time to enter the One Page dungeon contest approaches, and it promises to be better then ever before.  Many thanks to Random Wizard who is doing an amazing job of runnign the contest this year, but I still don't have an entry! My entry last year 'Brittlestone Parapets' gave a good showing, but I'd like to do better this year, and just haven't gotten around to doing the work involved yet.  Below are four one page dungeon ideas with thier introductory paragraph?  Which do you find most interesting?

Kugelburg:  The florid Kugelburgers slap their fleshy chests between bites of buttery pastry and black beer. They encourage vagabonds to move on in the morning, after a good meal.  They have no need of bravos - the area is safe, devoid of ruins, brigandage and unnatural beasts, without jobs for rough men and women of war.  Yet the sages and astrologers know that in three days’ the murky waters of Kugelburg’s wide bay will sink, retreating to the deep sea and unveiling the sunken dome of the palace of the last Voivode.  The locals know it to, but still hide from the Voivode’s ghost, so reviled was he for his avarice, hedonism, decadence, blasphemy and sadism.  So many were the Voivode’s crimes and so great the evidence of his corruption that the sorcerers of the Emperor himself drowned him, his palace, garrison and courtiers into the cleansing sea as recompense to his enraged subjects.
Green Flow Morass: The mouth of the great Green Silt River, a pestilent mangrove of unnaturally large blue shrimp and grey barked trees, every branch dangling with  mad eyed, sickle fanged monkeys - vampires every one, both tree and primate.  The polyandrium of the successor empire, and the site where it’s borrowed magic passed into borrowed time.  The Empire’s grand fleet of ancient stone ships, a flotilla much diminished since the days of the imperial peace, but still powerful beyond modern conception, was sequestered here by the resurgent and victorious powers.  Yet even in those final days, a generation or more gone, some soldiers of honor still served the imbecilic Emperor, that scion of a hundred inbred generations.  These brave stalwarts were interned with their ships when, rather then watch the fleet parceled out to the already quarrelling victors, they tore out the bottoms of their ships with improvised munitions or opened the shuttlecocks to the delta’s rich corrosive waters. Three great Leviathans and countless lesser battleships wait, testament to the power of humanity before the decline.  Settling into the muck, the uncanny bog reclaims the ships at the rate of a foot or more a year, and only the upper works of the grand fleet still rise above the foul waters of the marsh where they beckon with the promise of ancient and valuable wizardry. 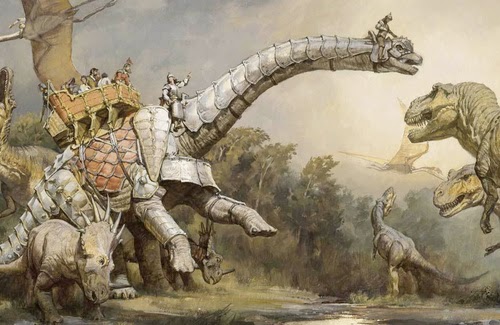 Kral of the Dinosaur Khan:  The call for assassins was unprecedented, and it feels strange that you were chosen, but the price was astounding, a barony split amongst the survivors.  Now you stand in the midst of the nomads’ great host, juggernaut of endless conquest, borne on the spined backs of saurian titans and forged by the Khan’s own will and personality. Your stolen diplomatic papers and rich priestly robes have allowed passage through the rings of camped tribesmen and their huge scaled beasts, but even your credentials will not gain entrance to the Khan’s own palace howdah.  A spire of polished bone, gilded wood and lacquered hides, the howdah is born atop the backs of a pair of titanic sauropods.  Now is the chance for black deeds and cunning, as the host has paused its relentless advance while the Khan recovers from wounds.  If he were to die there would be turmoil, buying civilized lands a respite from the host’s onslaught.  The Khan’s sons and generals gather even now, greedy to assume the mantle of the dinosaur herders.  It is in your hands to outwit the Khan’s serpent guards, slay the aged warrior king, and perhaps tilt the Host into the hands of a less sanguine successor.  Stealth and intrigue will be required as you must survive to claim your reward, and the Khanate has no love for assassins.
The Crawling Mountain:  The Mountain draws near on stony talons! A legendary cataclysm, the Mountain roars and shivers moving slowly to annihilate the works of humanity.  The bones of cities and the wrecks of armies cover its flanks as it lurches onward slowly towards the capital.  Trailing the Mountain is a chasm of earth and rock stripped bare of life and twisting backwards in senseless jags and whorls.  It may be that men cannot stop the mountain, greater powers then you have tried, but you might shift its path, or the recover the treasures of fallen empires to ease your flight to distant lands.
Posted by Gus L at 2:12 PM