Just finished running this for the Google+ ASE group, it took three session, but I think it was fun.  As a dungeon I designed it to be introductory with a little bit of everything, and a fair number of odd things to play with.  The party managed to circumvent most to the death traps and didn't lose anyone, though there were two saves vs. death and on near TPK (Well it would have resulted in capture and enslavement by Johnny Two-Bad - reanimated pugilist/Wizard). 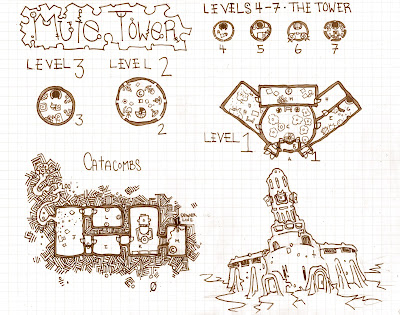 A waste of cracked earth expands for almost a half mile around the Mute Tower, an ancient construction of cherry red ceramic fused adobe marring the plains several miles East of Marsten.  The tower has been home to many strange denizens in the eons it's stood, most recently the two-headed mutant wizard "Johnny Two-Bad" who once terrorized Marsten with his madness and displays of strength.

Thirty years ago, as Denethix consolidated its control of the surrounding area and battalion of the Unyielding Fist, led by Captain Tyrno himself besieged the tower and put its inhabitants to the sword.  While Marsten has since bloomed into a bustling cattle town, the tower remains, an almost forgotten oddity.  Only a few souls have ventured to explore the place, due to its bad reputation and the general belief that the place was looted out by the victorious army when Johnny Two-Bad was put down.

Recently a small expedition from the Temple of Science asked directions to the Mute Tower, and headed off towards it laden with a fancy assortment of supplies.  They haven't returned, and it's a well known fact the the Temple of Science is wealthy enough to pay ransoms and rewards for those who return, save or hold its Scientists.

The Dungeon itself had only a few monsters, and most were reskinned standard creatures - I got to use carrion crawlers without anyone realizing what they were until two party members were already paralyzed.  The party even bought barrels of salt to throw at the creatures because they were some kind of horrible slug creatures. I think this shows the usefulness of gonzo, at shuffling about the cliches and tropes of D&D play and allowing wonder or something like it back into the game.