Space Zombies (Tomb of the Rocketmen) 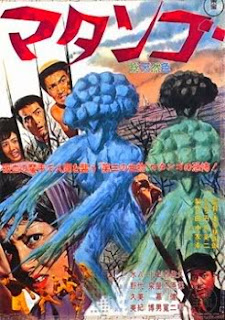 In ancient times humankind (and it was only humankind then, the elves, dwarves, goblins, & moktar are younger races) traveled to the stars.  As the Temple of Science recites, the Orbital Gods hint and the University moguls know,  each star is a sun, and each sun surrounded by plentiful worlds.  Amongst the worlds around distant stars the Rocketmen discovered: wonder, wealth, and power, but mostly they discovered strange death.

'Space Zombies', and the entire infestation of the slough with alien fungus, are the product of deadly spores, buried with one of the long dead Rocketmen.  The spores predictably broke free of the corpse they hibernated within, animating it as shambling corpse, grew into huge colonies in the sealed and abandoned environment of the Tombs and then faded and died due to lack of fresh air and water, only to be revitalized again from spore when Feh Ling invaded the tomb and reactivated it's power and water systems.  The fungal colonies have infested most of the larger tomb chambers and reanimated a large number of mummified Rocketman within.  The alien fungus will aggressively try to infest biological organisms, but has ignored Feh Ling and his offspring because they are not living creatures susceptible to fungal spores. The zombies and the fungus colonies that create them represent four different types of monsters: Fruiting Bodies, Mobile Fungal Growths, Space Zombies, and Floating Spores.

While some fungus horrors are mobile, and others stationary all share certain characteristics.  First all are directed by a colony intelligence, though different creatures have only a vague understanding of what others see or sense.  Thus once the party encounters a single fungus creature in the tomb complex, the colony will have a vague idea that there are intruders and a fresh source of food.  A troop of zombies or a mobile body will be dispatched to investigate, wandering in the vague direction of the last encounter with the party in 1D10+3 turns.  The fungus will also learn to adapt to the defenses and attacks of the party, and while during the first encounter with the party the fungus creatures will charge forward moronically, but in later encounters the colony may learn to ambush party members, focus on casters, or screen it's stronger units from missile fire and magic with zombies and spores. 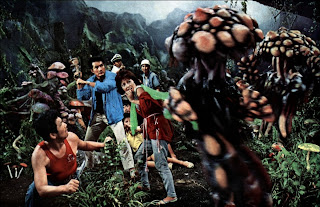 Space fungus creatures all share a similar appearance as well, they are garish colors that look wrong under terrestrial lighting - acid greens, livid purples, searing pinks and sickly yellows abound, pocking and decorating the ropey grey blue bodies of purely fungal creatures and erupting out of fungal zombies in the form of spire like growths.

Fungal Special Attacks: Infestation.  All space fungal monsters will infest the fallen with spores, that rapidly produce new fungal zombies.  Within 2D6 rounds of death (or 1D6 rounds of a failed poison save when attacked by a poisonous fungus) the target will convulse and rise as a fungal zombie.  Initially the corpse will still look much like the deceased, but over a matter of days absurd, vividly colored fungal blooms (spines, mushrooms and tentacles) will erupt from the shambling corpse rending it a barely recognizable monster within a month or two.

Fungal Special Defenses:Fungal Immunities.  Space Fungal creatures, like more mundane fungus is not effected by mind altering spells (such as sleep, hold person and charm), or poison (unless specially tailored to effect plants, or corrosive like Feh Ling's breath).  Unlike regular fungus, space fungal creature, hailing from the cold vastness of the void between planets is immune to cold and is moist enough that fire attacks do -1 point of damage per die.

Space Fungus Fruiting Body: Masses of grey coiled fungus spreading over a 10' square area and bursting with a profusion of varied brightly colored globules, toadstools, tendrils and vine like growths.  Fruiting bodies cannot move but form the hub around which space fungus colonies grow and spread. Fruiting Bodies will be protected by any other fungal creatures nearby, which will rush to their aid should the Fruiting Body take damage. Even without their symbiotes, Fruiting Bodies are difficult to destroy, they can flail at attackers up to 10' away with a set of barbed and poisoned fronds, and are protected both by the moist almost fireproof structure of their cores,and the cloud of hallucinogenic spores the surrounds the fruiting body at all times

Special Attacks: Poison. Fruiting Bodies lash at anything living that comes within 10' with tentacles and fronds.  Worse than the bludgeoning damage and jagged wounds inflicted by these fronds is their ability to inject the mixture of transformative spores directly into a living host.  Every time a frond strikes a living creature that creature must save vs. poison or spend the next 1D6 rounds convulsing as a space fungus infestation tears through their system.  At the end of this time the victim will be dead and will rise as a Fungal Zombie.  Cure disease will destroy the infestation, but while saved, the victim will be left daze and weak for 1D10 turns and suffer a permanent loss of 1 point of Constitution.
Confusing Cloud. The spore cloud constantly produced by a Fruiting body is a thick miasma with a heavy sweet reek,and clearly visible.  All living creatures within 10' of the monster must save vs. spells each round they remain within the cloud to avoid becoming effected by the disturbing hallucinations

Special Defenses: Fire Immunity. The body of them Fruiting Body is dense and waterlogged, making them immune to natural fire based damage, and resistent to magical fire (1/2 damage, save for no damage).

Space Fungus Mobile Growth: A huge pile of dense purple and pink mottled fungus, as large as 8' tall.  This fungal monster acts as a colony guardian and while only able to move very slowly itself, can extrude pseudopods that reach over 30' and crush, strangle or ensnare threats to the fungal colony.  Each Mobile Growth has a central maw, where victims can be devoured and destroyed if they continue to struggle despite the pseudopods constriction and bludgeoning.  Creatures in melee may also be bitten by the Mobile Growth's maw, which is studded with hard thorny masses and can grind living creatures into a nutrient rich mulch or leave them punctured and ripe for infestation.

Special Attacks: Entangle: On a successful strike with one of it's tentacles the Mobile growth will attempt to entangle it's enemy.  Entangling is accomplished by an opposed Strength check (each Growth pseudopod has a Strength of 12) with the Growth adding all successful attacks on the target to one roll.  If the monster succeeds in its roll by a number greater than the target, the target is entangled and struck automatically each round until it breaks free (by winning another strength contest with a -2 penalty per pseudopod entangling it) or the creature is killed.  Each round a target is entangled, the Growth will pull it 10' closer to its maw, and if the target is in range, devour it for double (6D6) damage. Mobile Growths will often concentrate on single entangled attackers, dragging them into their maw while ignoring others, after an initial round of spreading their attacks to grab as many enemies as possible.

Special Defenses:Ambush. Mobile Growths will hide in vegetation, rotting organic matter or shallow water and slowly (over a turn) adjust their color and texture to blend with their surroundings.  This Chameleon like ability makes the huge fungus mounds dangerous ambushers and they will surprise any enemy who comes near their hiding place on a 1-3 when sufficient cover is present.

Space Fungus Zombie: The ambulatory stage of a space fungal colony, the result of a fungal infestation reanimating a corpse.  Space Fungus infestation will reanimate almost any living creature, or corpse at any stage of decay prior to complete skeletonization.  These entities have only a vague intelligence and appear as shambling undead creatures with vile eruptions of brightly colored fungus slowly subsuming the body.  They attack by rending and striking with whatever natural weapons they once possessed and tend to appear in considerable numbers.  While there is little danger of infection from Space Fungus from the blows of a Space Zombie, creatures that are killed or found unconscious will be infested by a Zombie regurgitating a mass of spore infused fungus.

Space Zombie infestation is invariably lethal, but larger creatures often succumb partially to the infestation and endure in a state of rage and pain for some time after the initial infection and prior to death.

While no Space Fungus creature collects treasure, Space Zombies found in the Tombs frequently (20%) carry items of interest.  50% of items carried by Space Zombies zombies will be worthless junk, and 50% will be minor valuables.  These items will require searching the disgusting fungus infested corpses closely to discover.


Space Fungus Spore: Produced by Fruiting Bodies, Fungal Spores are head sized orbs filled with lighter than air gasses and a soup of space fungus spores.  They move at a stately pace through the air at anywhere from ankle height to about 10' off the ground, directing themselves with a set of wriggling fronds that dangle beneath their gas filled bodies. Fungal Spores will attempt to land on any mass of organic matter and seek to infest it with their tendrils. More dangerous then the gentle, but lethal touch of the Spore's tendrils is the explosion of infectious gas and spores that erupts when the central bladder of the monster is punctured.

Special Attacks: Poison. Fungus Spores attack living or moving creatures with their tendrils. These attacks do no physical damage, but will coat the target with a mixture of transformative spores that can infest and kill.  Every time a Spore strikes a living creature, that creature must save vs. poison or spend the next 1D6 rounds convulsing as a space fungus infestation tears through their system.  At the end of this time the victim will be dead and will rise as a Fungal Zombie.  Cure disease will destroy the infestation, but while saved, the victim will be left daze and weak for 1D10 turns and suffer a permanent loss of 1 point of

Special Defenses: Explosive Death. Upon destruction, or when receiving a single strike that does more than 6 points of damage from an edged weapon, a Spore will explode into a deadly cloud of toxic gas and disease carrying spores. All living creatures within 20' of the destroyed spore must save vs. poison or become Infested as if poisoned by the Spore.  The use of fire, acid, lightning or other attacks that are unlikely to puncture the Spore's central bladder will prevent such an explosion.
Posted by Gus L at 12:21 PM

Email ThisBlogThis!Share to TwitterShare to FacebookShare to Pinterest
Labels: Monsters, Tomb of the Rocketmen