Once again the party aboard the HMS Apollyon has taken a job on behalf of the Baatezu rail baron Malchris. The Devil is oddly happy about the partially failed mission (the characters revealed they were attacking an undead outpost on Malchris' behalf) but the selection of "boons" he offers the party members a choice from is sparse compared to his prior rewards. 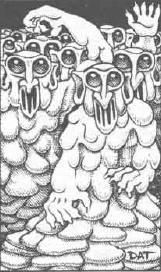 Ring of the Broken Feather - A glowing gold band, hot to the touch, with its exterior worked into
the shape of a feather.  The ring imperfectly protects the wearer from the attacks and powers of celestial creatures.  Outsider Entities of the Lawful Good variety will suffer a -2 on all rolls to physically attack the wearer, and the wearer will gain a +2 to any saves against them.

Scroll of Tormented Form - Written on crackling parchment from some unknown beast, this scroll is heavily wrapped in thick braided black cord and sealed in wax marked with a sigil of Orcus. Within is the 2nd Level Magic User Spell "Tormented Form"

By this horrid ritual the caster may transform his form into that of a sludge-like puddle of flesh temporarily.  The process is terribly painful, and the ritual involved requires an uninterrupted turn of disconcerting whispered chanting as well as the incineration of a small piece of the caster's dried skin.  After the ritual the caster will liquify, puddling with a series of vile wet sounds.

The disgusting form can crawl and ooze at a rate of 10' per round, climb almost any vertical surface, slide under most doors and through small cracks (of 1/2" or greater size) providing access to or escape from many hard to reach areas.  While in liquid form the caster can see and hear as normal, but has no mouth and cannot speak and so cannot cast spells.  The blob has sufficient manual dexterity to unlatch doors and work machinery, but lacks the strength to wield weapons, instead attacking by pummeling for 1D4 points of damage.

The transformation lasts exactly 3D6 turns, and cannot be cancelled by the caster prior to it's full duration.  When rolling duration, if three sixes are rolled the transformation will be permanent, and is irreversible without diabolic intervention or a wish spell.

Seal of Unmaking - A heavy iron box contains this simple disc of silvery metal.  When thrown onto a magical seal of any kind the Seal of Unmaking will flow and dissolve like mercury destroying permanently whatever magical protection or effect the target seal offers before etching an evil mark into the surface (a Permanent Symbol of Protection from Good 10')

Devouring Dentation - A set of what appear to be dentures made of obsidian inscribed with squamous glowing purple glyphs, these teeth when placed into the mouth of a mortal creature, will graft into its jaws, permanently granting the wearer a magical bite attack (1D6 damage - hits automatically while successfully grappling) that may be used instead of a normal attack. The teeth radiate evil, and will disconcert non-evil creatures encountered who see them (1 point penalty to reaction rolls).  Additionally the teeth make all food eaten by the wearer taste like raw bloody flesh.

Bottle Imp - A glass globe, plastered with four seals of red wax and black ribbon. The globe is about 6" in diameter and contains an unhappy seeming, constricted imp.  The imp, a small purplish blue humanoid with a mouth of needle like teeth and a single compound eye and dragonfly wings can be released by undoing a seal on the globe.  With each use the imp is required to serve the globes owner for 6 hours after release, before being drawn back into the globe.  It can do almost any task an Unseen Servant is capable of, as well as memorize and relay messages (despite being terribly dumb itself), or even attack (though it abhors combat).  Once all four seals are removed the imp will be released and will torment it's liberator in proportion to the demands she placed on the imp while it was in her service.

Deed to Infernal Property - Grants the wearer the right of ownership of a "tenant's fee" somewhere called "The Noxious Coast".  Value is unclear and use unknown, but Malchris says, it's a lovely spot - and that he has a vacation home nearby.  Presumably it also can be shown to infernal authorities for safe passage in the Noxious Coast province.
Posted by Gus L at 12:53 PM