Carcosans and Setting Thoughts on Carcosa

Some for some reason I’ve been rolling up Carcosans lately.  Here are their character sheets: 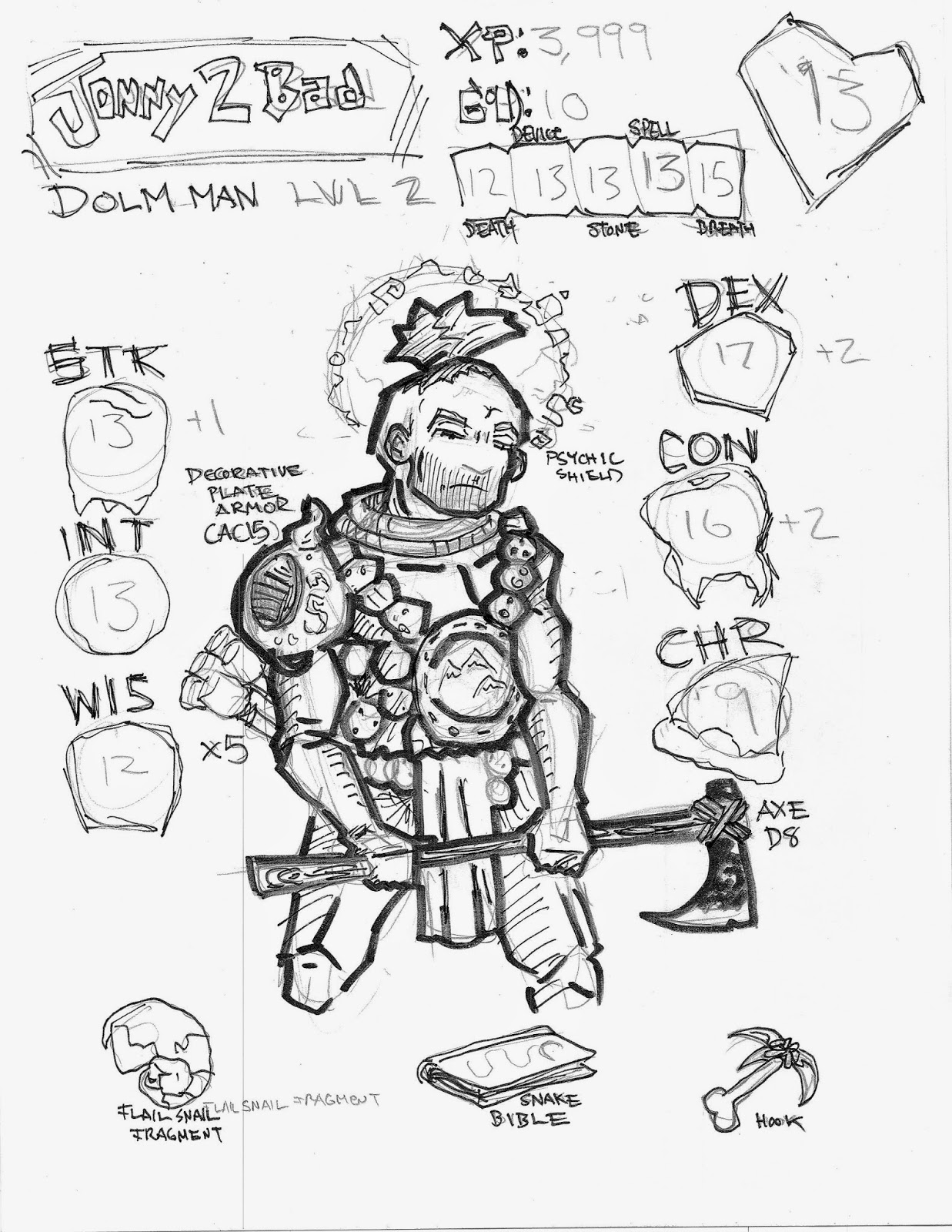 Johnny 2 Bad – Made it to second level playing in a very strange game inside the god Vorn.  There was a horrible vampire – many party members almost died.  Someone cast sleep on Johnny and he awoke in a murderous fury possessed by evil spirits because Vorn’s body is under Death Frost Mountain. As a player three solid hours of sipping whiskey made me think taking my ax to the unconscious party member was the best bet (like he has a high AC, can’t hit me back, and is already unconscious so I won’t kill him – this was flawed booze logic, but I didn’t kill him).  So now Johnny is a 2nd level (almost 3rd) flailsnail Dolm Man. 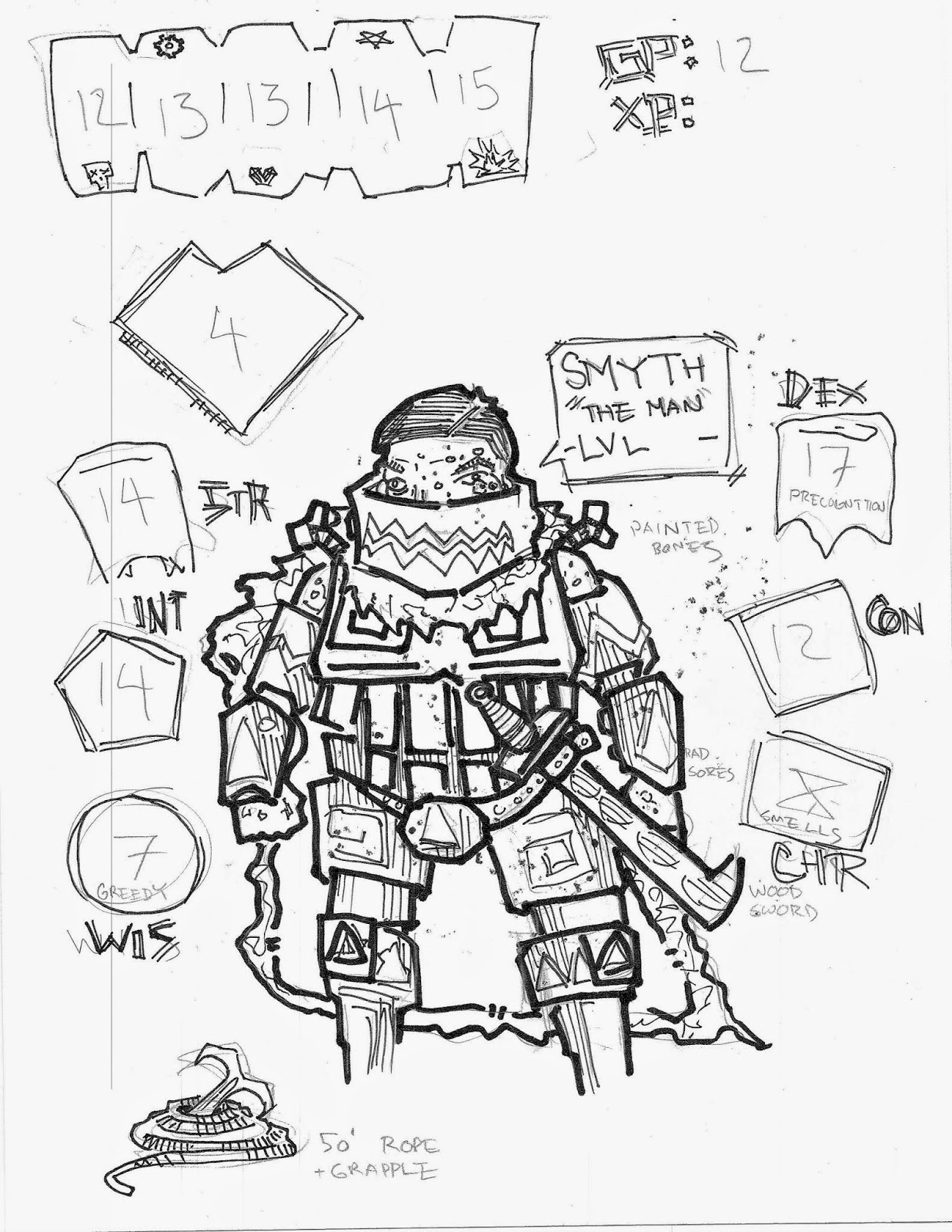 Mr. Smyth “The Man” -  Mr. Smyth is part of the traveling troupe of actors “The Rainbow Connection” and he’s a white man.  I decided he’s greedy and kinda fat.  He has a high Dex because he’s also a bit psychic – it’s not that he moves quick, he just has nimble little piggy hands and knows what’s coming at him next sometimes.  Mr. Smyth tried to steal some radioactive space rocks from a specimen cabinet and now he’s covered in stinking weeping sores.  He’s got a suit of wooden armor that covers him mostly (rare on Carcosa) but I think we can all agree this is for the best. Now if only the party can find some potpourri. 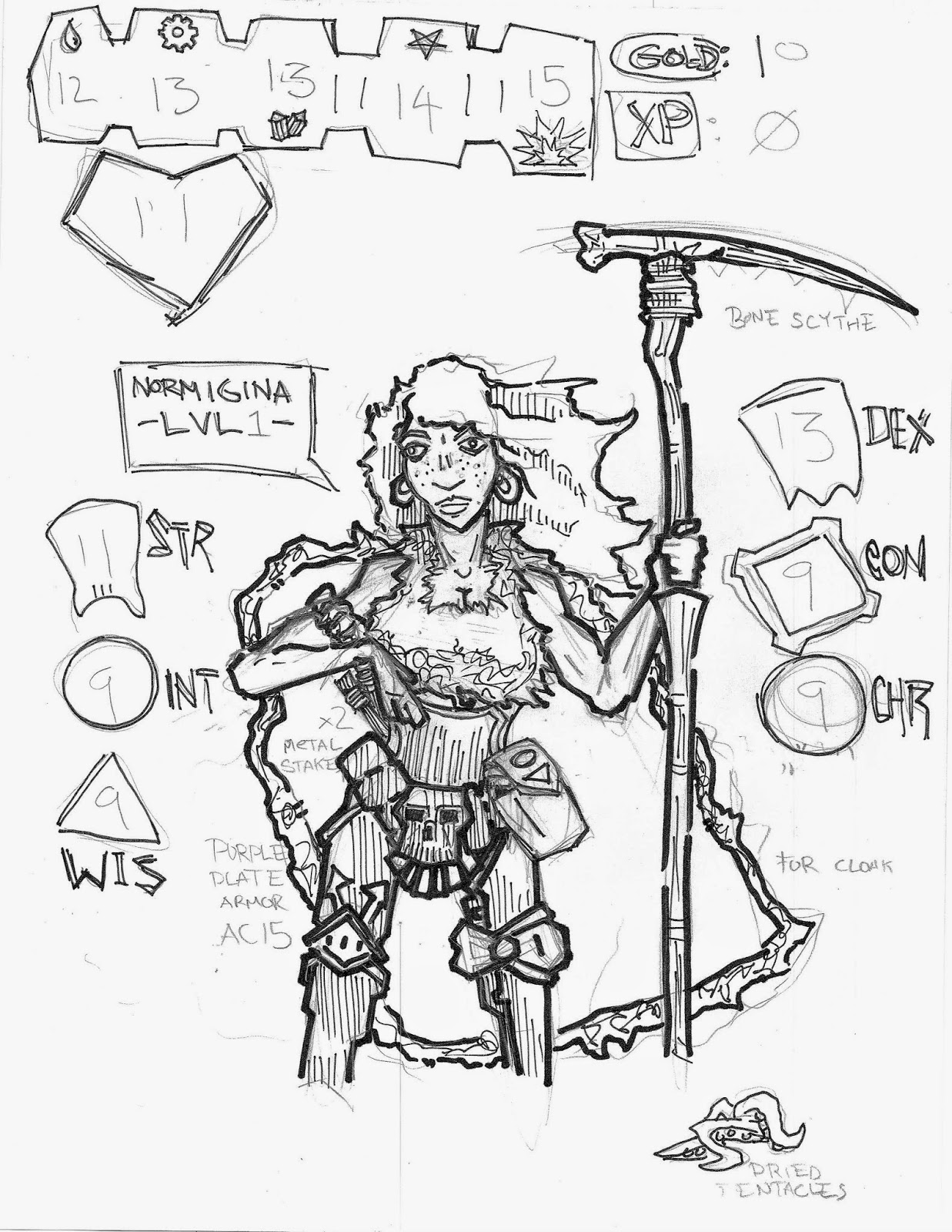 Normagina – A thoroughly normal Carcosan lady - a yellow woman to be exact.  I decided she’s level headed and sane.  She’s also an actor with the “Rainbow Connection”, who put on only one play, but switch the color of the actors to prey on the prejudices of the audience. It’s gotta be some sort of Carcosan creation myth or something. Normagina’s starting equipment included a furkini, so I can’t really be blamed for that.  Plus Carcosa is sort of inherently Frazetta so I figure everyone in Carcosa has the same ridiculous beef/cheese cake body type.  Except poor Mr. Smyth who was clearly meant to be a villain.

So I’m not running Carcosa, but the fellow over at Save vs. Total Party Kill is, and he did a fine job.  My own thoughts on the setting are as follows and have nothing to do with the way the game I’m playing in is being run and more to do with what seems sorta hollow about the setting.

That’s right Carcosa is hollow.  Sure it’s got the ultimate science fantasy, post apocalypse pedigree, but there’s something sort dull and surface to it.  What it needs is more fluff and flavor.  He’s what I’d propose.

A) Messing with items and such – the point of Carcosa isn’t getting rich, it’s survival. I’d make food and water the basic XP and wealth drivers.  Sure you can sell gold rings for a sandwich, but it’s having the sandwich that gives you XP.  I know that doesn’t seem like much, but something like each day of food you recover is worth 10 (or 50) XP – meaning you need to recover at least 70 (or 350 XP) per session to keep the character alive. Yeah I’d create a 50 XP debt per game as upkeep – you don’t get this XP to level, you spend it to not have to roll up a new random dude.  Items recovered can of course be traded for food – but their’s no GP, just barter.  Each PC should of course start with food for like 2 weeks (2 sessions) and can create a reserve (which they must carry) or spend these starting supplies on a roll on some kind of special “techno/magical doodads” table

The way I see this effecting the game is that it will make the characters into desperate adventure hounds.  It may encourage combat, but only with things that look edible – like dinosaurs. A big mess of creatures on Carcosa are likely inedible or poisonous.  There needs to be an ‘eating bad meat’ table as well for players who try eating ‘blue hell polyp” meat to see if it’s edible.
2) Character differentiation is non-existent.  Sure you can play a sorcerer... Carcosa has all these ‘races’ of Crayola people, but does nothing with them.  I already decided that ‘yellow’ people on Carcosa are Simpson’s colored and have 3 fingers on each hand – or at least the ones I play do. There needs to be some differentiations though.  Little things.  Saving throw bonuses, +X to a skill (Carcosa needs X in 6 skills that perhaps can be point bought for attack bonuses – like 2 points of stealth cost your level increase attack bonus) , nightvision (for Dolm colored people – don’t ask why), stat bonuses penalties, and other minor effects. Like maybe green folk are photosynthetic and need ½ the survival XP, Ulfire have a small chance to reflect spells, and bonemen are sneaky (natural 3 in 6 stealth). This way you can build a competent PC or combat beast rather then having every PC be the same.

3) It’s a damn hexcrawl.  That’s fine, but since it’s a weird world a random generator for interesting strange land would be a help.  In general Carcosa feels like it needs more flavor.  I think of it as an unbelievably ancient land, more Dying Earth/Virconium/Books of the New Sun than Gamma World, and the monuments of dead pasts should abound, along with interesting natural areas. Rocky wastes under a purple sky it may all be, but to the Carcosan there’s gotta be forty seven words for rocky waste.  This helps as well in the whole “game of survival” aspect of Carcosa – finding a dell of fruiting succulents or a plain with insect mounds might be a good XP source Of course I’d also make regular use of an exhaustion die/encounter die with separate pips for food and water.
Posted by Gus L at 1:18 AM

Email ThisBlogThis!Share to TwitterShare to FacebookShare to Pinterest
Labels: Carcosa