HMS Apollyon - Devils aboard the Apollyon

Devils are strange creatures, they've always been one of my favorite villains, even when I was a kid with the Monster Manual I. They're wholly obviously evil, powerful, and alien - yet they are orderly, intelligent, willing to negotiate and even polite.  Perfect bad guys in a way.  Still, I started playing D&D in the 80's and the "Satanic Panic" still makes me uncomfortable playing with Devils involved (My Clerics never use crosses either) - I was raised agnostic, but I don't want to step on my players' religious sensibilities by messing with their real life cosmology - hence it feels hard to use Devils.  The problem is compounded in the Apollyon setting, which is both explicitly apocalyptic (It's in the name even!) and inhabited by what are effectively sorcerers in league with extra-planar forces of order (mostly Devils). Sure I call them Batezu (not Bateezu), but what we're talking about here are the nomenclature of hell, returning exiles of heaven, the bowed army, the apparatchiks of the pit.

Devils within the Apollyon hold a strange position - they are not creatures of chaos, but of order, and they are generally opposed to the state of the vessel.  The aimless drifting, slow decay and endless abandoned decks strike the diabolic mind much as they do the human - as a waste, as a chaos of neglect.  Of course where a person might dream of transforming these spaces into productive industry, comfortable shelter and safe places of daily life, Bateezu only see spaces they might control and form into a place for endless torment and as springboards for greater control.  Because of this shared vision of preserving some order against the entropy of the vessel, and the generally decadent and corrupt nature of the Apollyon's "human" magic users, Devils have become the most common outsider force encountered within the hull.  This relationship is in some cases far too close, and the majority of passenger class families have one or more strains of Batezu blood.  Only the Marines seem to object to this, but they are a small and strange group have been generally supplanted by other forces. Devils aren't even hostile to humans (except those in the service of the Fishmen, Marines or rival Dukes of hell) most of the time they are encountered within the hull, and usually would rather talk about making a deal then fight.  This may be because, Devils, as much as humans, appear trapped aboard the vessel and rather than serve their dukes have found their own goals and carved out their own terrestrial domains in exile (some have even hinted that if they were to die aboard the Apollyon they would be permanently destroyed or changed).

As mentioned above Devils are Evil, Lawful and Schemers, and the last two of these traits have made them the go to supernatural force aboard the Apollyon.  Devils will always have time to talk to a passenger class sorcerer and generally appear easy to deal with, whereas the other useful outsiders tend not to: celestial bureaucrats (Lawful Good) are busy and very concerned about talking to lesser entities.  Alien machine intelligences (Lawful Neutral) are too alien to want much from the Apollyon, and the Bronze Men of Tatene and the Sunken Land (Neutral with Lawful tendencies) are random and petty in their whims.  Devils have consistent wants, as they don't feed on maddness and destruction as demons do, but on mortal avarice, self-destruction and corruption.  Where a demon would drive a man mad and relish the resulting spree of violence and Devil will convince its victim to slowly trade his integrity, sense of right, honesty and humanity over for dross or temporal power (to be misused for the Devil's purposes).

Ultimately the result for the victim is the same, but the Devil will gain power and satisfaction in the moment that the mortal realizes he's given up everything worthwhile in himself for tawdry things.  When the mortal tries to back out or asks for reprieve, the Devil (pretending to be the aggrieved party) will produce the contract for the mortal's soul and remain firm on the terms of the deal.  Strangely sorcerers and others hungry for power keep thinking they can out-think or out-deal devils, and on rare occasions they can, but even successful deals mark the mortal.  If possible it is generally best to deal with other outsider entities, as their deals, even when more costly or restrictive, rarely are part of a larger plan to seduce mortal souls into knowing self-destruction.  It cannot be forgotten that these entities are evil and malicious no matter what veneer of affability and rationality they present. 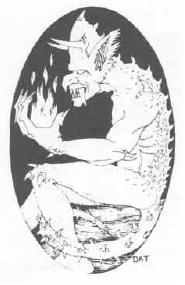 Devils are so lawful that it manifests in terrifying ways, they are justice without mercy, power without reflection.  Beleiving in strict hierarchies, Devils simply lack the ability to see why any entity with power over another would have any duty to the entities below them in the chain of being. Still, the contract is utterly sacred to them, and they will always perform their half of a bargain exactly as written.  When fulfilling or collecting on a contract a Devil becomes empowered and  will be  up to ten times more powerful than the same devil acting without direction.  Most Devils are in fact highly organized and very polite, they abide by the deals they make (though they never make fair deals if possible).  They don't have the ability to feel good will however, and any devil's actions are to its benefit or the benefit of its masters in the infernal hierarchy.

Currently several groups of Devils who escaped their passenger class masters during the retreat from amidships control the aft end of the 9th deck trunk rail line.  A chatty, multi-armed, insect eyed Devil named Mhalchris has his domain directly south of the Marine Sigil Maze (largely erected to protect against his spider bodied dragoons). He has indicated that other diabolic forces are nearby and has made it clear he is ready to deal with Sterntowners.
Posted by Gus L at 5:40 PM