HMS Apollyon - The Taxonomy of the Dead 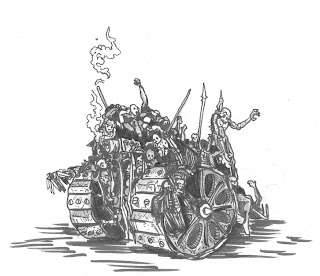 Corpse Chariots, War Machines or Animated Corporeal Amalgamations are a  form of undead colony.  These creatures arise from several co-mingled consciousness anchored to a single object.  In almost every case these undead colonies are anchored to pieces of siege weaponry.  It is unclear if the reason undead cannon are common is because the colony began with the souls of the weapon's crew who died at their posts or if colonies directed by more intelligent undead are herded to form around and animate abandoned weaponry.

In appearance a Corpse Chariot is a self directed moving gun carriage heaped over with rotting corpses and with two large arms or claws formed from bones, cable, steel and wrappings of ragged cloth.  While the chariot's arms are deadly melee weapons, most of these abominations also have sufficient necromantic power to utilize the heavy weaponry that makes up their core, firing bursts of negative energy in the form of phantom shells.  Several different kinds of weapons exist in Corpse Chariot form - the most common are:

Generally the War dead use corpse carts to lead attacks and support their defenses as the slow witted colonies are immensely powerful.

The Undead within the hull of the Apollyon are numerous, and varied. Abdead horrors are almost ubiquitous in some areas and have become more and more common as the larger living cultures of the Apollyon: Sterntown humans, Fishmen and Froglings get pushed into smaller and smaller areas, depleting their strength in conflicts and slowly wearing done the vessel's enormous reserves of resources.

The Dead comprise roughly three categories – the shambling dead, the unaligned and the steerage dead (also known as the bloated dead or the ash plague).

The Shambling Dead are unintelligent, self generated by tragedy, loss or simply the result of immersing a body in the necromantic waters that fill many of the lower decks. They hunger, seeking to feast on life, without any intelligence or rationality. Most often Shambling dead are simple zombie like corpses, slow, and easily returned to rest by a shot or club blow. This group also includes various phantoms and entities – spectral conglomerations of necromantic humors that coalesce into dangerous phantasms that repeat scenes of tragedy and waylay passing scavengers out of frustration, fear and unfocused anger.

The Unaligned Dead are a spectrum from ghoulish living corpses slightly above the brute level of the Shambling Dead to sophisticate Liches. The most common form of unaligned dead are revenants, wights formed from the deaths of individuals with strong emotional attachments to the world. Revenants of pain, cruelty, abandonment and hatred are the most common, though revenants of sorrow, shame and even love have been encountered. These creatures can be reasoned with, though there needs are usually few and their wants most often antithetical to human life.

The Unaligned Dead also include whole factions of the undead that are not part of the Steerage dead, such as the "War Dead", risen after the retreat aft.  The war dead are primarily zombies and other corporeal dead made up of the refugees and soldiers who died in the flight from the undead attack on humanity.  In addition to relatively mundane reanimated corpses, larger bands of War Dead also contain ectoplasmic War Haints, and feared undead siege machines commonly refered to as corpse chariots (see above).

At the top of the undead hierarchy are the Steerage Dead, an undead civilization that may be the true masters of the Apollyon.  These powerful entities are led by Plague Kings and Queens of varying appearance and abilitie who each direct legions of undead, all of whom still have rational thought and the ability to speak.  Therefore the Steerage Dead may be reasoned with, but their hatred of the Stewards and Passenger Class prevent any lasting peace.