Feh Ling the Dragon (Tomb of the Rocketmen)

Dragons are creations of the Apocalypse. The first dragon was born with the initial salvo of planet busters and hell burners that began the final war between ancient empires, over 3,000 years ago.  Dragons were birthed by the psychic reverberations of the millions who died in the collapse of humanity's golden age and embody the various varieties of destruction that humankind brought upon itself.  The monstrous wyrms have no souls or culture, and seek only to propagate themselves and finish the ancient Apocalypse that created them.

Verdiginous Dragons are relative late comers to the spawning of dragonkind, creatures of hopelessness, failure and want.  The desperate spasms of starvation and inequity created by societies struggling to maintain a technological way of life after the collapse, but failing tragically, birthed Verdiginous dragons. Physically Verdiginous dragons appear more machine like than animal, a conglomeration of rusted and corroded cogs, conduit and engines, coalesced into a monstrous animal shape. Unlike more warlike dragons born from instantaneous death and destruction, Verdiginous dragons are not often whirlwinds of fury that lay waste to vast regions.  Instead, these dragons are hoarders and collectors of machines, technology, supplies and wealth, which  they guards jealously while their hoard decays and corrodes beneath them, giving birth to numerous verdigionus dragonlings which swarm about their parent's lair until they become big enough to flee or are devoured. 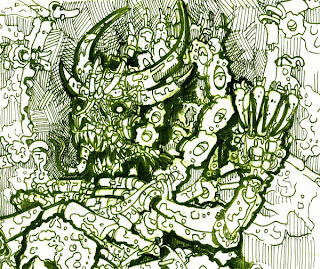 Attacks: Feh Ling may attack any creature in a 180' arc in front of him with his bladed bronze fore claws, as well as a crushing bite.  Targets to Feh Ling's sides may be buffeted by his wings, huge sails of ragged plastic, rubber and leather strung between umbrella like ribs of hinged metal.  Enemies behind Feh Ling can be lashed with his powerful tail.  Both wing buffet and tail slap attacks by Feh Ling require any struck to roll a D20 under Dexterity to avoid being knocked prone, stunned or tossed back, and unable to act in that round or the next.

Special Attacks: Feh Ling has a variety of special attacks that allow him to both inflict terrible damage on his opponents and control the battlefield.  First, Feh Ling's natural abilities include the ability to breath a cloud of caustic gas and spread unnatural despondence. Second, the creature is a moderately talented spell caster, the equivalent of a 6th level magic user.

Breath:  Feh Ling may breath a sickly yellow cloud of corrosive and poisonous gas once every D8 rounds (he always begins a fight with his breath weapon ready).  The cloud is 50' long, 40' wide and 30' high.  The gas requires all creatures except Verdiginous Dragonkind to save vs. poison or die.  A succesfil save will result in the target taking 1/4 of Feh-Ling's current HP in damage.  In addition to physical damage Feh Ling's breath corrodes metal, instantly rusting or pitting both magical and mundane weapons and armor within the gas cloud.  Only cosmetic damage occurs with a successful save vs. Dragon Breath, but if a creature in the cloud fails this second save, any metallic armor and weapons they wear or wield will be corroded.  Normal weapons and armor (including technological weapons) will be destroyed utterly, while magical weapons and armor will loses a "+" or similar enchantment for each exposure to Feh Ling's breath attack.  Immunity to acid will prevent damage from Feh Ling's breath, while immunity to poison will prevent the need to save vs. death.  Immunity from both acid and poison will render the dragon's breath harmless, much to its surprise and chagrin.

Aura of Hopelessness: So powerful is the psychic aura of a Verdiginous Dragon that any creature within 40' of Feh Ling must save vs. Dragon Breath or be overcome with soul crushing hopelessness.  Any creature effected will stand stunned for one round before being able to act in any way.  Even after recovering from this initial wave of despondence, the victims of Feh Ling's aura will be bereft and receive a -1 to all attacks, saves and damage.  The despondence effect lasts 1d4 turns after a victim is removed from Feh Ling's baleful influence, after which a save vs. Spells must be made to see if the victim is permanently effected by depression (-1 Wisdom) until a cure disease spell is cast on them.

Magic: Feh Ling knows and may cast the spells listed below as a 6th Level magic user.  However, unlike a magic user, Feh Ling knows these spells due to his draconic nature, and while he must mediate on them them daily, does not require a spellbook to do so.  Likewise, Feh Ling does not know magic in an academic sense and cannot use scrolls or memorize the spells from books he has captured.

Special Defenses:  As a monster of mechanical construction, energized by a spirit of malice, Feh Ling is immune to many mind effecting spells such as: charms (except a potion of dragon control: green), holds, sleep and similar spells.  Additionally Feh Ling is immune to all poisons and takes only 1/2 damage from electricity and cold.  Normal weapons can harm Feh Ling, but do 1/2 damage, and normal melee weapons striking the dragon must save vs. Dragon Breath as their owner or corrode into uselessness.

Feh Ling's senses are excellent, both on the material and other planes, and he can detect invisible creatures on a 3 in 6 chance from 40' away.  Stealth, such as hide in shadows, will work on Feh Ling, but he is capable of spotting a hidden approach 2 in 6 times, even if the thief is successful.  He will be more curious than immediately aggressive about such intruders, but will do his best to capture them if they are alone.

Appearance: All Verdiginous Dragons are constructed of decaying machine parts, and Feh Ling is no exception, consisting of a mass of decaying brass and corroded copper conduits, rusted steel plating, brass cogs and glowing glass tubes - animated by a malign spirit of greed, desperation and famine.  Physically Feh Ling, and his offspring, appear in the form of semi aquatic or aquatic creatures, the dragon himself resembling a winged plesiosaur, with a third set of claw handed limbs forelimbs.  The majority of Feh Ling's offspring often take this form as well, but many also appear to be supple newt like constructions, or even spider legged insectile forms.  If given a large enough pile of broken machinery and junk, Feh Ling can conceal himself from cursory glances, a tactic he used often as a younger dragon, hunted by its parent, and which his spawn follow now.

Tactics: A morose and cunning creature, Feh Ling feels little joy in battle, and prefers subterfuge, bad faith negotiation and intimidation.  If Feh Ling is approached non-aggressively he is likely to negotiate rather than fight. Feh Ling seeks tribute of valuable food stores, machines and treasure, but will also negotiate for the locations of large amounts of these things.  While Feh Ling is willing to allow contrite or obsequious enough groups to leave his lair, he will mercilessly harry them through the wilderness, attacking unprepared camps to snatch individuals in his claws (who will be devoured or dropped from great heights) or scourging his enemies with clouds of toxic gas. In negotiation situations he will cast ESP on those he speaks to in order to determine their intention. Violent intent or a lack of fear will be met with a Suggestion spell ("kill you companions") directed at any obvious magic practitioners or the speaker opposing him, followed by a blast of Feh Ling's breath weapon while the enemy is distracted.

If faced with actual assault Feh Ling will use his breath weapon as much as possible, and furiously bite and claw at individual targets in order to reduce the number of attackers as quickly as possible.  On the second round of combat he is likely to forego a bite in order to cast Ray of Enfeeblement at any melee attackers. If his attackers survive more than a couple of rounds, especially if his breath appears to be ineffective, Feh Ling will retreat, compelling a wave of his offspring forward, and waiting behind them to breath on his enemies repeatedly, cast Enlarge on himself or one of his larger spawn, and to retreat in earnest if the battle is going poorly.  While retreating, Feh Ling may cast Dancing Lights behind the party, making what looks like a wall of glowing greenish dragon eyes (like his own and those of his spawn) appear to be approaching from behind.  In non-combat circumstances Feh Ling will use Enlarge to make himself more intimidating, or Dancing Lights to created the illusion that he has allies approaching.

When seriously injured or afraid, Feh Ling will attempt to retreat and then cast Feign Death, not reviving even if struck a few times.  If left alone for more than a few rounds, the dragon will revive himself and slip out of the tomb, abandoning his hoard and brood, to plot revenge and destruction while he recovers (which could take months) in a nearby ruin.

Biography/Goals: Feh Ling the Verdiginous Dragon is one of the Beast of the Eternal Fleet's innumerable children.  Feh has grown large enough and strong enough to be a power in his own right, and with the cancerous logic of dragonkind he has been cast out by his parent as a threat, to find or make his own desolation.  Through luck and the subtle influence that dragons possesses Feh Ling discovered the Tombs of the Rocketmen and surrounding ruins filled with decaying ancient technology.  Entering and exiting through the underwater airlock, Feh Ling is well aware of the tomb's fungal zombies, but as a mechanical creature they do not bother him or his own growing brood, leaving the dragon free to collect technology, treasure and plundered supplies from the surrounding tomb studded wilderness and trade roads.

Feh Ling's purpose is to grow, hoard and breed, and he has already made a start on this, attracting less attention because the surrounding woods are so rich with ancient barrows filled with the lost technology Feh Ling covets.  While he has not been actively raiding far from home, the pernicious influence of the dire wyrm spreads as far North as Denethix, lowering crop yields, causing feelings of avarice and hopelessness and disrupting industry and craft.  If unchecked, Feh-Lings influence will cripple Denethix's industry through accidents, breakdowns and starvation, which will undoubtedly result in violent unrest and military conflict.  The immediate area around the Tombs of the Rocket Men will depopulated shortly, as Feh-Ling's brood grows and leaves the nest.  Within several months the dragon himself will also start raiding farther afield, destroying Josiah Rooter's stead first, then crushing the Bandit town and shattering the temple at the Obelisk of Forgotten Memories, after massacring the priests (or any other residents).  After the immediate area is denuded of treasure and swarming with young Verdiginous Spawn, Feh Ling will raid farther and farther from his lair, only restrained by his fears that his hoard will be plundered is left alone.   Wizard's towers, military encampments, caravans, towns, and eventually Denethix itself will be raided, poisoned and finally smashed by the dragon, only to be taken over by his swarming brood.  Eventually almost everything within one hundred miles will be Feh Ling's desolation will be transformed into a land of unnatural want, privation and hopelessness, inhabited only by starving bands of refugees and dragon spawn. Only the Anomalous Subsurface Environment, which contains forces (including dragons) powerful enough to give Feh Ling pause, will be free from his influence.
Posted by Gus L at 5:08 PM

Email ThisBlogThis!Share to TwitterShare to FacebookShare to Pinterest
Labels: Monsters, Tomb of the Rocketmen