Shrines and Churches of the Rustgate

The religious presence in the Rustgate is greater and more varied than in most other areas of Sterntown, perhaps the trapped and desperate population provides a more fertile ground for religious recruitment.  Yet despite the volume of believers in the Rustgate, the churches of the Rustgate are not ornate and at least two serve as missions and soup kitchens.  All the major religions of Sterntown and one unique local cult are established in the Rustgates, while the streets host a myriad of self proclaimed prophets, lost flotsam holy men and ranting preachers devoted to a variety of gods and devils.  Strangely there is little religious violence within the Rustgate, and even the Church of the Queen does not attempt to enforce its orthodoxy with more than words and the occasional pamphlet. 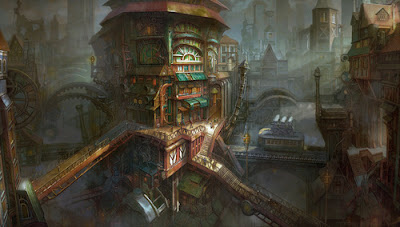 1. Shrine of the Ship Spirits of the Rustgate.  Madam Stott, the younger daughter of a well respected priestly family represent the Ship Spirits within the Rustgate. It is an important posting, as only amongst the scavengers and cast offs of the Gate do followers of the Spirits outnumber those of the Queen.  Stott works closely with the formidable Brazen Gear, a crusader and powerful priest in his own right, but also the leader by popular acclaim of "The New Lands" beyond the gates.

The Shrine of the Spirits in the Rustgate is still obviously three adjacent re-purposed storefronts, but considerable money and effort has gone in to making it more church like.  Facing the street the walls are painted with elaborate murals of machinery and utopian scenes of a idealized age aboard the HMS Apollyon.  An armored and rifle armed porter stands ready to help any who wish to enter and worship.  Inside the shrine, the front  rooms have been transformed into a cluttered shrine, walls pasted with prayers with small altars of rust, gold and cracked rubber are scattered about the room.  Heavy fills the large low chamber with with a scent of machine oil, and acolytes pass through occasionally to check the individual shrines. The rear rooms contain a meeting hall, offices and an armory, all decorated in the same slightly garish style.

2. The Cult of the Most Fecund Leviathan.  In the Sternmost cul de sac on Port side of the Rustgate is a narrow apartment pile.  Of old and sound construction, the pile's gabled dormer windows hang ornately carved whalebone planters filled with a variety of medicinal and edible fungus.  A pair of elderly froglings and creep the rust flaking dormer roofs every morning and evening misting the enormous collection of fungus with large brass pump canisters, but this appears to be the extent of the pile's upkeep.  A short set of steps, down a narrow cut between the pile and a scrap dealer next door leads down, below the level of the deck plates to a small door, encrusted with rime and barnacles, as if once submerged.  A 'lamp' made of a sealed, water filled, glass orb and with a glowing crustacean skittering inside marks this as a shrine to the Leviathan.

Vistors have been met at the door by robed priests and priestesses, and a few invited into the first room beyond, apparently an ordinary sitting room, but the Leviathan's is a mystery cult and the interior of its temple forbidden to all but the most advanced devotees.

3. Brother Beedle, Representative at Large of her Divine Majesty the Eternal Queen.  Brother Beedle is a strange priest for the Cult of the Queen, a timid man in his early 20's Beedle walks the streets of the Rustgate offering the Queen's blessings and handing out loaves of day old mushroom bread and cheap dried fish to the hungry.  Even his ornate robes of office, which those with knowledge of his church claim are of a mid ranking altar priest, are dingy and lack the gravitas associated with the ornate golden domed Church of the Queen along the Temple Promenade.  Beedle works out of a small room near the gates, and has no ritual space beyond the public square where he conducts the slow orthodox service of the Queen once a week on midday mornings.  The most common theory is that Beedle is in exile from his church for some transgression, sent to provide a token presence amongst a population generally hostile to the Church.  Yet, Beedle is well regarded by most factions within the Gates due to his humility, lack of skill as a preacher and complete lack of proselytizing.  On several occasions Beedle, despite his clumsy way with words, has been called upon to mediate between other groups in the Rustgate and it's said that because of his value an undercover Steward assassin follows him protecting him from robbery or harm.  Others claim it's not the Stewards who watch after Beedle, but one of Madam Bibi's knife workers.  Beedle often has holy water, in limited quantities, to sell - a trade that appears to be his primary source of funds.

4. Temple of Lyrus.  A newcomer to the Apollyon, Lyus is a martial goddess of victory who's appeal has been growing in the past year with the exploits of her high priest, Semm, and the church's willingness to help the downtrodden.  Still in a battered storefront, Lyrus' Church is known less for its appearance than for it's programs.  Semm and his lieutenants run a daily weapon's training as a form of services, while the church also offers free food and aides parishioners in the production of salable crafts by providing space and a few manufacturing machines scavenged by the head priest.

It is unclear what the Temple's goals are, but they appear to be on friendly terms with the Ship Spirits, and it seems likely that Lyrus, should her current priest die and like many other minor gods and goddesses brought aboard by flotsam clerics, will eventually be absorbed by the Ship Spirits as another manifestation of the vessel.
Posted by Gus L at 12:26 PM