Why you should read old novels...

Of late I've been reading a fair amount of H. Beam Piper.

Piper was a writer of pulp sci-fi the late fifties through sixties who is far more compelling than he and his lot are given credit for.  Comapred to contemporary sci-fi pulp authors he's a better writer and provides more interesting ideas per novel than any contemporary pulp novelist.  Let's place Piper in his proper intellectual slum - his fiction is space opera, soft sci-fi or military sci-fi (Federation stories) and sword and planet romance (Paratime).  His contemporary imitators are people like Harry Turtledove, David Weber and Eric Flint.  This isn't to say "On Basilisk Station", "Mother of Demons" or the first couple "World War" novels aren't a nice read, but frankly Piper is a better writer - not technically, but because he knew when to let a story die.  Now perhaps had Piper not died himself before the advent of endless mass market sci-fi/fantasy series we'd be subjected to endlessly churning Little Fuzzy novels, but as it is there are a few book by H. Beam Piper that are well worth reading.  Worth reading if you like adventure stories, worth reading if you don't demand literary excellence, worth reading if silver age sci-fi is something you can tolerate and more important to this blog - worth reading if you want some gameable sci-fi ideas... 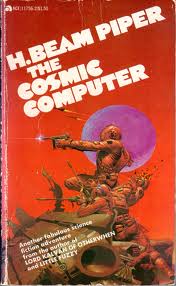 To me the problem with party based tabletop sci-fi gaming is two fold, first the issue of party size in a more or less modern world and second the issue of exploration. Traditional fantasy RPGs are about character develop to a degree. Your character advances from nebbish to hero, assuming they survive.  This is easy enough in a fantasy campaign where the world is mired in ignorance and the unknown in two steps past (or down) the village well.  Sci-fi characters, as explorers sent by an advanced society are experts. As experts they also belong to something (a state, planet or race), contrary to to a fantasy settings initial party of blank slate characters.  When the entire world, except for the initial village, is an unknown, players can make their characters anything they want

In non-post apocalyptic science fiction it's hard to make the same claim. A starship or whatnot provides power to it's owners and there are always civilized spaces on a scale that make the free-wheeling exploration of a low fantasy environment hard to maintain for a few adventures (as players are smart and almost always seek the protection and support of authority if possible).

Well Piper's Space Viking has the solution.  A campaign set in to post collapse galactic rubble of the standard empire provides the anarchy and unknown that a good game needs.  The players can be feudal magnets from the stellar deeps, returning to the heart of the collapsed civilization that chased them away. Unknown technologies to discover, a lack of authority or power centers and a wide open universe are easy if one makes the PC creating society a forgotten offshoot of the collapsed empire seeking to plunder it's bones. 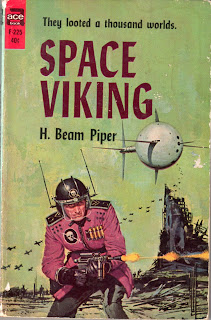 Cosmic Computer is perhaps the best H. Beam Piper novel for gaming though with a cursory mediation on cargo cult in the waning days of the above referenced galactic empire where the society of the protagonist has lived of the abandoned treasures from a inter stellar war a generation ago.  The forgotten, hidden and abandoned facilities of the long evacuated army make great adventure locales.  Packed full of treasure in the form of medical supplies, weapons and ultimately space craft for the PCs to recover there are several classic dungeon locations in Cosmic Computer - except with a sci-fi bent.

First there's a dungeon in the form of a space port filed with bandits.  They can keep the protagonists off with the old defenses (nuclear missile batteries - cause Piper is from the early 60's), but they can't guard all the entrances.  Henchmen prisoners to release, troves of plunder and ultimately a railroad to the next dungeon are the reward for clearing the spaceport (inside an extinct volcano at that!).

A manufacturing dome city provides the next sci-fi dungeon crawl.  Long abandoned, the only problems, beyond an initial bad air trap are the robots.  Left to rot with the power turned on, the numerous robotic assistants in the lunar dome city (reached via ship recovered from the space port dungeon) have gone mad.  Turn on the power and the PCs must fight there way past a rabble of industrial robots to reclaim the dome city and its technological treasures.

I must admit comparing Cosmic Computer to Space Viking it thrills my pessimistic soul that despite the optimism of both books we known that the efforts to maintain civilization in Cosmic Computer failed, and did so without a trace (there's no mention of Merlin or Poictesme in Space Viking).  Piper wasn't afraid to let his storylines (and terrohuman future history) go to dark places.

Ultimately this might be the best lesson in these novels - a campaign must have an end.  A TPK is the obvious one, but even if the PCs make it to 10th level, don't make them fight Orcus (or do - but have them lose) let them retire, and start up the game world again with the first PC's keeps as ruins on the frontier or bland towns with an old dragon skull in the village shrine.
Posted by Gus L at 11:31 PM