Below is a list of things I like in D&D - it's pretty stupid, but it's true.  I think there are some important lessons taught by the things listed though - games should have things to run away from, enemies that are not monsters - but are worse than the PCs, trick monsters that require thinking about, and objects of pointless wonder.

1. Owlbears - You're thinking "who crosses a bear with an owl?" "What a stupid monster!" Well apparently Chinese plastic dinosaur toy manufacturers of the late 70's find these terrifying.  Dudes who grew up during the cultural revolution - so you should listen to them about terrifying.  That's were the best OD&D monsters come from, the plasticized nightmares of people who spent their real childhood in the 3rd or 4th darkest nightmare of 20th century autocracy.  The rust monster, the Bulette - are any monsters more D&D than that?  Lately WOTC has talked about rationalizing the Owlbear, No!  The Owlbear is not rational, it cannot be a PC race, standing stalwart next to your Teifling sword-mage. I want to play an Owlbear PC just so I can grab a D20 and roll it three times at the "describe your character" part of the night and be like "well that's caw-caw 2D6 for you, and a hug for you! The inn is destroyed ... some jackass let an Owlbear in!"  The Owlbear is a ravening destroyer from the chaos dimension of unreasoning hate!  Owlbears exist for one reason, Owlbears teach 1st level parties to run.   They don't have treasure, they don't make sense, they can't be reasoned with.  They are real monsters, and D&D needs monsters that are strange and horrible and without reason.  I also think they come in strange colors (with peacock feathers say), like to eat magic and reflect spells - that's just me though, yours can be woodsy and devour 200lbs of vermin a day.


2. Vikings - Perhaps due to a recent television show, the absolute awesomeness of Vikings is not as cool as it was.  Well I liked Vikings before Vikings were cool.  Let's set aside the actuality of Vikings as an advanced iron aged pagan civilization with a fascinating culture and interesting history. Let's get back to the sense of Vikings as some kind of black metal destroyer devils from the sea.  Put yourself into the (likely painful) shoes of some an Irish monk of the 900's.  Vikings are terrifying - first they're all a foot taller than everyone you know (sure they're actually 5'9" - but just imagine!), and second they don't make sense! They kill and loot and don't give a damn about your god.  They come straight out of the hungry sea and burn everything down. When PCs misbehave you throw these doom vikings at them, so they think about what being a murderhobo really means.  Or you just let them roll up a boat of vikings and cast the spear for Odin over the heads of every damn thing they meet. 3. Statutes that Shoot Beams From Their Eyes - It matters a little what the beams do, but not that much, they must do something horrible.  It doesn't have to be a full statute, a giant stone head is classic. These things fit into that kind of trap that everyone knows is gonna kill someone, but the party is still messing with it. It's best if there are gemstones the size of dinner plates in the eyes.

4. Evil Demi-humans - The key is making them horrible, but not having them realize that they're horrible. Dwarves that practice terrible forms of vivisection, slavery and cyborg remaking of each other for efficiency - they're also proud of it.  Elves that casually snack on human babies (of halfling perverts, the less said the better).  Sure this just sounds like the kind of thing that make Pat Robinson all frenzied - but there's a point.  Why aren't humans, elves and dwarves all singing folk songs together and taking over the D&D world?  Why isn't it a fantasy snuggle fest or a fantasy United Nations? Because elves eat babies and Dwarves make the Gulag look like Disneyland - they're not even malicious about it, they are just alien horrors.  Anyone who wants to play a Demi-human needs to understand this - they aren't bad, but they are unapologetic unnatural evil.  This also goes a long way to explain why the only demi-humans around are in adventuring parties, because only someone so stupid as to seek thier fortune in the tomb of Bad Skull Face the Dragon Lich would even consider hanging out with a backstabbing, man-eating, nihilistic elf. 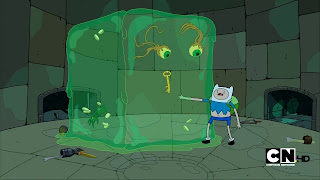 5. Gelatinous Cubes - Another weird monster that can't be reasoned with.  Not as cool as the Owlbear because you can't shout "Caw caw" when they attack, but a lot of fun can be had with the gelatinous cube.  You can make them funny colors so they look like glass or a magic effect.  You can put them in pits like a big bowl of jello cubes. You can have things floating in them so PCs mistake them for ghosts. Gelatinous Cubes are stupid and nonsensical, a perfect example of Gygaxian naturalism run amok. "Something scrubs the perfectly 10' x 10' sections of dungeon corridor - why not a giant acidic 10' x 10' jello cube!" Still it's this stupid weird that makes them worthwhile - the cube is a beautiful way to suggest to a player that logic is only tangentially useful in dungeon land, and once you've established that the rules of the world aren't normal, it cuts down on complaints and "that wouldn't work that way" arguments.

Secondly Gelatinous Cubes, like all slimes, jellies, puddings and oozes are trick monsters - but sensible ones.  Unlike the mimic, a slime isn't a pure "gotcha", it's a terrible form of life that attacks with something other than brawn.  Once you know the trick of them they're easy, but figuring the monster out is the fun part.

6. Guns - Controversial perhaps, but I've realized I like including them, they add this Science Fantasy element that enforces the "You are not in Middle-Earth" feeling to the game.  It's best when guns have the potential to be suddenly deadly (accomplished with exploding damage), but really bad at killing magic things.  Also they are noisy, which means that when you shoot a gun in my dungeon, I get to roll a random encounter.  Sometimes I don't even roll "for" a random encounter it's just that every monster in a 1,000 feet knows you're there.  What amuses me is that players will frequently use guns when crossbows are just as effective (given that D&D does not model the training time for bow use ... snark, snark, Fatbeard!).
Posted by Gus L at 6:00 PM