Was thinking about buried vaults from before the collapse of a Science Fantasy Society and what great dungeons they might make.  Below is a small one I call Shelter Antere.  We have nuke plants and robot repair stations, a dome of green crops (or not if the light went out) and plenty of space to fill with undead, mutants, ghouls, upstanding citizens or degenerate horrors. 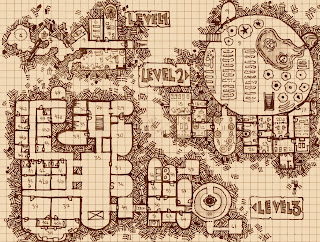 As a map I am not so sure. I added too much fiddly detail I think - in the engineering sections and medical sections only.

Level One - is an Engineering shop section, and there's even an abortive escape tunnel.  I'd run this as a mutiny, trapping the vault closed behind the door to this upper section, where no one survived to let the majority of the dwellers out once the safety interlocks allowed outdoor access.

Level Three - On the right, living quarters, on the left reactor and robot shops.  One might note a lack of supply rooms.  This is because the large covered pit leads to a robotic supply pit, an acre of dusty crates superintended by angry robots (or maybe balrogs, because that's what happens when you dig too deep).

Well something like that at least. I mean most likely it's filled with radiation ghouls and insane AIs anyhow.  I note (as referenced in the comments with Garrison James of Heriticworks) that this dungeon is full of choke points and has very little in the way of alternate routes.  Some would suggest this makes a bad dungeon map.  This was drawn on a whim, and as is my way, drawn with an effort to make something logical and organic (i.e. things are in the space that make sense).  Yet this is unsatisfying - as a dungeon map.  If one were to fill this with vault dweller of any intelligent variety, it would be unassailable by a party unless they had a few area effect attacks at least (and the vault dwellers didn't).  Could be good still for undead - or robo undead, which is sort of the science fantasy variant, along with plain old robots.  Anyhow it's a map.  I bet the initial population of the vault was somewhere in the 25 - 50 range - too small really.  I kind of envision it as a private vault built for a pack of rich folk.  This of course seems like it would be the perfect set up to devolve into necromancy or ghoul packs.
Posted by Gus L at 9:56 PM