A classic module of the golden age of D&D, Written by Moldvay in 1982 for Red Book (it says so itself) Basic D&D. There is something pleasant about B4 because of its origin, as it’s clearly written with youthful players in mind (the glossary for exciting dungeon terms like “niche” for example [Aside: I sometimes wonder if the use of certain archaic words in D&D has changed the frequency of these words in popular usage since]), and ultimately, while B4 has many troubles, there’s an endearing spirit to the adventure that makes it worth reading. It seeks to encourage, even requires, a great deal of imagination and dungeon building by the GM, and while I think this is a noble intent for an introductory product, it is a weakness in a published dungeon when one is looking for either a drop in location or something to fill out specifics, such as traps and set encounters (the reasons I use published modules).
While Lost city is labeled B4, it’s a tighter and less sprawling adventure then B1(search for the unknown) or B2(Keep on the Borderlands), yet without the narrow focus of B3 (Silver Princess). Some might find this enough to stop reading, B4 is no sandbox, it’s a dungeon adventure that makes some weak gestures at a sandbox in the end.  Indeed, these weak gestures, and the typical poor monster placement of products from its era, are B4’s biggest flaws. The better elements of the adventure are its excellent traps and a certain spirit worth emulating.

The beginning of B4 is dubious, the hook is miserable. The party stumbles across the adventure local starving and dehydrated because their caravan go lost in the desert. Yet, this isn’t really that bad for a first adventure. It’s introductory and for a first adventure these sorts of forced starting situations are a way to explain how a diverse gang of misfits got involved in the adventuring life – beginning things in media res also has the advantage of starting the fun up immediately and justifying pre-gens for new players. The Lost City includes pregens in fact – boring faceless pregens that lack even a name. The only nice thing about the pregens is the 'pick a kit adventure packs'. This is a good thing, and helps cut the sting of losing a character, especially for new players, though in Lost city it’s really a bit limited. I adore pregens, I sometimes think all adventures should be run with pregens and random equipment packages. Still, Lost City does this poorly with not enough thought (though given that this module was written in 1982 the fact that packs and pregens are in Lost City is pretty impressive).

After the dubious start Lost City gets far better. The traps are universally excellent, if simple, and have an added benefit of being dangerous but not immediate lethal (salvos of multiple darts that do 1-3 damage each). An excellent trap to me is one that has at least a tiny bit of mechanical sense to it  allowing inventive solutions, not percentage rolls, and the gas trap in Lost City’s first room is a great example. This trap is proceeded by a sprung trap that creates a sense of either caution or complacency, and the effects are dangerous, but not instantly lethal. Likewise the opportunity to disarm this trap is fairly intuitive (stuff the gas vents with rags or open the door. It’s good in a starting adventure where the traps are surely dangerous but not instantly lethal.

The first two levels of the adventure are strong, and have the nice addition of being faction heavy. The maps are small, but create some verticality and mostly make sense. There are also some lovely set encounters - specifically the giant guard beehive and the table of random crazy folk who make up the largest number of random encounters. With a series of faction encounters that leave the party with plenty of opportunity to talk and make alliances, there’s a real feeling of a living adventure locale here. Yet even these early parts suffer from a certain lack of flare by contemporary standards. The monsters are almost all rather boring, which is forgivable, but worse they are placed in some odd places without any organic sense. Open the long sealed dusty treasury, and face it’s ancient guardians – a pack of stirges. Now I like stirges, but they are living vampire bird, bug bat things and really aren’t likely to last too long sealed in a secret chamber without prey or water. Similar monster placement (a fondness for giant lizards within an inhabited dungeon for example) is a bit problematic and while typical of older products doesn’t help the players make any sense of the dungeon. The treasure is likewise lackluster, it’s always just piles of coin and an odd piece of ‘jewelry’ with a flat GP value. 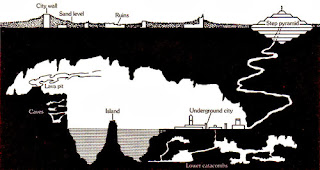 After these first levels, things start to fall apart. The entire module has a feeling of being unfinished or sketched out rather than complete, while there is a lovely underground city map, and a few entire lower pyramid floors they are written with only the most vague details. This is B4’s downfall, it’s under-realized. There’s the core of a classic idea here, and it’s nicely implemented as far as it goes, but ultimately it’s insufficient to play without a lot of work. While others have praised the later part of Lost City as inspirational and successful precisely because it gives the GM so much leeway to create and innovate an adventure in an underground city. Yes, Lost City does this, but by providing bare incomplete notes for the vast majority of the adventure locale I don’t think Lost City does any favors to the contemporary GM. Sure the underground city idea is neat, with its mad dreamers and tentacle god monster, but these days there’s nothing especially novel about these ideas. Rather then provide an open feeling that encourages design, the limited notes (in the form of one or two lines descriptions) actually act to constrain rather than inspire, because they fail to give interesting or exciting nuggets of scene and setting, but only provide monster placement (again somewhat haphazard) and treasure value.

What’s interesting about Lost City, and it’s experiment, is that it doesn’t just grudgingly suggest GM innovation and scenario design might be doable, but demands it. In an introductory commercial product there is something refreshing about this. Additionally the (limited) advice about design and running the adventure is solid and helpful. Lost City encourages player and GM creativity rather than additional purchases, and this is a good thing. B4’s heart is in the right place, and in the spirit of old style D&D, even if the execution feels a bit weak, rushed or clumsy.  While Lost City provides a great look at some 80's dungeon design ideas - especially in its early pages, it suffers from many of the problems typical of the era as well, with unfocused monster placement and boring treasure.  This sort of uninspired and completely unnaturalistic monster and treasure placement is well worth mockery in modern products, and it's still a problem in B4.  The sort of faction play that might have been novel in 1982 is now almost a requirement for large dungeon complexes. Still B4 is playable with a fair bit of work, which is more then can be said for some of its contemporaries or modern imitators.
Posted by Gus L at 12:10 PM