I wade into the greatest OSR fight ever, several years late

I think I will adopt ascending AC.  I am bad at math, ascending AC is easier to figure for me then THAC0.  I’ve never seen any real debate here and I’ve enjoyed using ascending in some games recently.  How to convert seems to be the biggest issue.  Nothing new really said below, notes to show my players mostly. Still I feel it's a decent discussion of my personal conversion story to ascending AC.

What’s more interesting is that once conversion to ascending AC is complete, hit matrices don’t seem so useful anymore, the AC vs. hit calculation is so simple that a bonus system (like LOTFP uses) has much more appeal – two lines on a sheet “bonus to melee” and “bonus to range” are all one needs. Still conversion – how to do it? LOTFP does this by making most adventurers better then humans (+1 bonus) and fighters really good at hitting things with bonus of 1+level.  Thus a 5th level fighter with a normal strength has a bonus of +6, meaning a 45%, 12 or better hit on a plate armored shield wearer.  That’s a lot better than the 14 or better required by a 5th level fighter on the Labyrinth Lord Table, but not absurdly better.  It is an example of how LOTFP is (contrary to some opinion) mechanically tougher then Basic D&D.  It’s not, LOTFP Fighters hit exactly like monsters.  B/X fighters don’t, but I think the statistic bonuses of B/X make up for the gap between monster and fighter here rather to the player’s advantage – especially at lower levels.

I don’t mind this, because monster AC in traditional rule sets gets absurdly low at some points – A 0 AC = 20, so the DEMON TYPE V has a an AC of 25, and fighter damage is flat.  Your fighter should be able to chip away at the huge dread beast over time while the rest of the party tries to figure out ways to do it in more dramatically, but with less chance of success (great saves for that beast).  LOTFP make me feel a bit bad for the other classes, especially demi humans and thieves, in games with more fighting then LOTFP.  No one but a fighter ever gets better at combat – thus non-magical classes get less useful in combat as they advance.  This is especially cruel for dwarves, who are usually thought of as fighter types. Thus I would ramp up the PC level based bonuses a bit for a vanilla D&D world game.

Ideally this would work with a flat stat bonus system, +3 bonuses overwhelm and confuse everything, maybe only a +1 bonus for 13 or better in a stat, -1 for 8 less.  This limited stat bonus discourages stat inflation and limits absurd hit and damage bonuses.  Stat inflation is bad, not only because it is min-max game playing, but because it makes stats as the basis for character knowledge checks less helpful.

The proposal I have for hit bonuses is as follows.  PCs have four categories: Warrior, Martial, Trained and Untrained.

Untrained Adventures are: wizards and anything like them.  They have no to hit bonus to start, like a normal person (normal people include hired guards and such so this isn’t that bad).  Every 5 levels of adventuring the untrained PC gains a bonus to his.  Thus a 10th level wizard (The maximum level I would allow) has a +2 bonus.

Trained Adventurers are the non-martial classes that still have training in fighting: thieves and clerics in a simple B/X game.  In a more advanced game it’s classes without specific military impulses, but some training – bards, illusionists (my mu/thief version at least), druids, halflings, elves.  These classes gain 1 + level/3 bonus to hit.  A 10th level thief will have a +4 bonus to hit, which isn’t bad.

Martial Adventurers are adventurers specifically trained and practiced in warfare.  This includes the fighter subclasses mostly: paladins, rangers, dwarves and likely assassins.  Those with a combat bent, but without the warrior’s narrow focus on mayhem.  Bonus is 1+level/2. 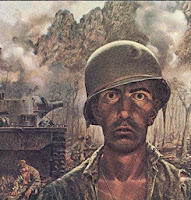 Warriors are special they are adventurers that are not only trained, practiced and devoted to fighting   This group is limited to fighters and likely special classes like monks and barbarians.  The bonus to hit for these combative monsters (and they fight exactly as well as monsters) is 1+level.  Thus a 10th level fighter gets +11 to attack, meaning no matter what an unarmored foe does they will be hit.
arts, but have a special quality of aggressiveness or pugnaciousness that makes them more dangerous then even a well-trained soldier.

A note on Demi-humans: Demi-humans are special magical, strange or odd creatures.  That or they have extremely static societies usually, and train their members rigorously in certain types of combat.  Either way one looks at it they have an attack bonus of some kind.  While in older D&D this comes from the monster descriptions of Demi-humans (Elves gain +1 hit with sword or bow) and tends to be specific, I think a flat categorical bonus for the 3 basic types of Demi-humans works for me.
Elves (and their ilk) gain a +1 combat bonus for ranged and melee.  This is usually for their cultural weapons, but not necessarily.  Thus a Level 1 elf fights as good as a fighter, but this advantage is quickly lost.  This makes sense in the settings I like ASE elves are genetic commandos, and culturally hive dwelling cruel militarists. On the Apollyon Passengers all have otherworldly blood and commonly receive military training.

Dwarves (and other melee focused demi-humans):  A +1 to hit in melee.  Normal dwarves are as good in a fight and in melee their natural density and tirelessness makes them as dangerous as motivated veteran troops. Even as they level they remain good in combat, but do not advance as quickly or as far as human warriors.

Halflings, froglings, merrowmen, clockwork gnomes, ratmen, goblins and whatever other sort of horrible sneaky subhuman populates the weak but sinister spot on the great chain of being in your game world gain +1 with missiles.  Don’t try to mousetrap a hobbit village.  That fat hobbit farmwife can throw a kitchen knife with the same terrible accuracy that the king’s elite archers can drop an arrow.  Don’t even play pub darts with these sorts of creatures.  If you are fighting a rude halfling, after losing at darts, grapple with the creepy little glutton.

These are the rules I am adopting for my G+ games from now on.  They are simple to convert and simple to use.