“We are not the first here and I do not mean the previous expeditions.  Scouts did find some supplies from previous drafts of prisoners, and a few graves – some worryingly lacking the marks of the Light, but they also discovered a village of sorts.  Abandoned, twisting up the Northern wall of the shaft, we are encamped in the ruins of what may have been a mill or a factor at the foot of the long stairs that make the cliff hanging villages gates. The stairs are flanked by galleries for spear men and archers, and beyond a squat crenelated fortress looms.  The apostate are exploring the ruins, and while some vermin have been chased off or slain no real creatures of darkness rise up to redeem their souls. The pueblo is abandoned, and there are only vague signs.  The lowest reaches of the pueblo’s fortress, and the mill are cracked and scarred by fire, but beyond there is no sign of violence except bones, covered in rust colored moss and laying in drifts in low spots.  Despite these omens, the village is well protected, and the pale cougars which proved such a menace on are initial arrival are easy to keep at bay with the old fortresses’ narrow stairs and battered walls.  A broken arch, has been recently discovered, leading to a grand building barely visible in the gloom, tomorrow a group of prisoners seeks to cross with a rope apparatus, and I fear that we will learn secrets there that will bring many to the Light of redemption. ” 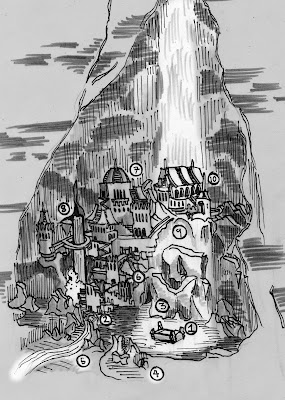 The Underdark will be split into nodes on a larger map, with geomorphs and randomly generated content to fill in the spaces between these nodes as necessary. This is an old method, the one used in the Descent series back in the 1970’s, but it seems functional for a strange ½ dungeon, ½ wilderness like the Underdark.  I both like and have some misgivings about procedurally generated Table Top adventure locales, but I think in an exploration game, with a basic map of key locations (mapped as dungeons or individual locales) and factions in place it’ll be effective.  Certainly HMS Apollyon has taught me the virtue of vague nodes scattered around a larger map with ‘highways’ between them.  One cannot map the whole of the Underdark, it is not a megadungeon.

The map above is for the initial Node, ‘The Dusklight Quay’.  The Dusklight Quay is a huge chimney that terminates thousands of feet above in with the monumental grate in Fortress White's courtyard.  Prisoners are lowered into The Dusklight Quay by means of long, rusted chains, either individually shackled to the chain or in rough cages of brittle wood.  Note that it contains several locales requiring small maps of their own.  These important areas are keyed.  With brief descriptions below.


1 – The Dusklight Quay – A square dock like structure of local reddish stone rock in the midst of the faint shaft of light shining from the surface.  This appears to have once been a mercantile concern of some sort, likely for trade with the surface, though any evidence of who used it and what they traded is lacking.  The central dock structure has arcades and storerooms beneath it that are tainted with a musty, greasy animal smell.  The rock plain beyond seems covered in lichens and to contain many small swift lizards and rodents.

2 – The Shattered Mill – Once a factor, mill or arsenal, this building was smashed with siege weapons and the interior burnt.  Well made from local stone, the exterior is solid and protected by a small blockhouse, decorated with worked iron pillars.  A broken, rusted iron waterwheel rests against the mill’s Western side, half submerged in the pool at the base of the cataract above.

3 – Northern cleft – A dark 40’ cleft in the rock leading to a wide passage that slopes downward and  away.  It seems dry and no footprints, not even those of cave vermin, mar the dust leading away from the Dusklight Quay.

4 – The Crooked Sponge – A mess of crumbled spongy rock riddled with small twisting passages leading South, luminescent lichens and insects seem prevalent here, but the passages are confusing and absurdly broken up.

5 – The River Way – the cataract of Pueblo Gloomlight winds through a series of large caverns, evidence that this river was once used for trade can be found in the stone dock near the mill and a cobbled track with mile posts leading Southwest along the river.

6 – Fortress Gloomlight – A small keep protected by many crooked stairways and a crenelated barbican.  The rooms are burnt and smashed and the entire fortress shows signs of combat.  The final gate upward is still barred however.

7-  Pueblo Gloomlight – A small town, built of rock blocks and hammered iron sheets as decorative roofing.  The largest building appears to have once been a marketplace.  No one lives in the Pueblo, and the only evidence of its former resident are piles of lichen covered bones in the pueblo’s cellars.

8 – Gloomlight Cataract – a 150’ cataract of cold clean water emerges from a large twisting cleft choked with strange fungi.  Narrow stone and iron catwalks surround the cataract and lead to a hanging tower built into the cavern wall to the West.  The pool below the cataract is empty of life as is the river or stream winding South in a tiled channel towards the River Way.

9 – Broken Span - Once a glorious flying arch of worked stone, leaping 80' through the pillar of diffuse and fading light from the surface, this archway is smashed leaving a 40' gap, The stones near the bridge near the gap is wobbly and seems ready to crumble at any moment.

10 – Gloom Hall – Jutting into the shaft of light filtering from above, this magnificent building of simple stone and decorative iron roofs can only be reached by crossing the Broken Span. It appears to be a colonnaded hall or temple and has its own gatehouse tower.
Posted by Gus L at 11:19 PM