Note this is a review of the first version of Death Frost Doom, the new rewrite makes some changes for the good, adds some stuff, includes a new map and better art. Still the same adventure though.


Having just played through Death Frost Doom in the Pahvelorn Campaign, and survived rather well - of all things considered.  I went and purchased the module for the sole purpose of reviewing it (okay also wanted to see if I could steal anything for my own games).  This post thus contains a fair amount of Death Frost Doom Spoilers. 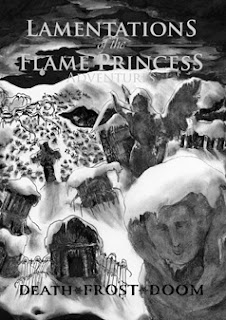 Death Frost Doom has assumed a sort of iconic status in “OSR” gaming, and I can see why this is.  It has both a very classic old school dungeon crawl feel, with some lovely set pieces (especially early in the module), and is completely willing to main and kill characters with relatively little warning.  On the other hand there is something new in the module, representing a 'renaissance' perhaps. Death Frost Doom is clearly not a product of the traditional D&D mentality, found in most early TSR works, that sees the game as having war-game like goals: kill/foil monsters, collect treasure and advance characters.  A great deal of Death Frost Doom is spent with lavish attention on atmosphere and its structure is less a series of challenges and more an unfolding horror story.  It’s this second part, the focus on atmospherics and novel sorts of adventure beyond the now trite dungeon-crawl experience that make Death Frost Doom noteworthy.  Despite Death Frost Doom mostly involving a delve into an ancient tomb, many traditional D&D experiences are lacking – no wandering monsters, no secret traps (all traps telegraph their existence in interesting ways that make the players want to mess with them) and no boss monster to defeat.

That’s not to say Death Frost Doom lacks challenge.  There are a lot of sinister puzzles, deadly traps and more things that look like puzzles and traps but provide only ambiance. The point here is that rather than the dungeon crawl being the challenge and adventure, the challenge and adventure are a result (perhaps inevitable) of figuring out what’s wrong with the dungeon crawl.  The lovely set pieces mentioned above exist in Death frost Doom to build tension and atmosphere, and are well worth emulation.  I especially liked the chairs that always face the door and the pacifist madman at the foot of the mountain.

I will not reiterate the basic premise and surprise ending of Death Frost Doom, suffice to say that the mad scramble from a newly arisen army of the dead was enormously fun to play and seems like it would be wonderful to run.  The tombs and graveyard that make up the adventure location have a lot of interesting things to mess with, and I suspect the average game plays as a slow exploration of increasingly fearful chambers with a fast paced rush through those chambers to escape, or a terrifying bit of social game playing with the ancient general.
Below is my list of changes or extras that would improve running Death Frost Doom – since I suspect most people who read this blog will have read or even played the adventure.  This isn’t to say it needs improving – the basic weird tale/horror movie feel of the module is an excellent and it’s end options: 1) Death in glorious struggle with undead army 2) Fleeing through the freezing countryside from howling ghoul packs 3) Making a deal with an untrustworthy and vampire general - are perfect for such a genre piece.


1) Make the Crypt Map Less Linear – The actual crypts in Death Frost Doom are on a grid that shouts out “this is not the point of the adventure” – some looping sections, steps and oddly shaped rooms would help. This would also making mapping more interesting – and I think requiring the party to map would really help the end game rush as the adventurers attempt to find their way out. A map that provided a logical place to hold off the undead horde would be amusing as well, while it’s equally obvious that a party can’t hold off thousands of undead, some place with clear barricades and maybe a narrow causeway over a pit of even more undead would taunt players into trying and being forced to retreat.

2) Atmosphere in the Crypts - Some atmospheric notes in the crypts would be nice, they are very bare currently. Of course the size of them means that this might be best accomplished with randomized content - a table of things to find in individual crypts (a bone rattle, strange coins over the eyes of a corpse, a mummified pet) could help here as well. These sorts of tables are actually very useful, because while a decent GM can think up the interior of a crypt or other dungeon chamber pretty quickly in isolation, it’s much harder to think up the contents of numerous repeated similar spaces a way that makes them interesting.

3) Provide a Random Encounter Table – not monsters, but odd noises and atmospheric effects. This would both maintain the illusion the random encounters are possible and give the sense the tombs are still sort of ‘alive’.

4) Re-skin it All! – Perhaps a necessity for using Death Frost Doom for grognard OSR types. This adventure is easy to re-skin with all sorts of touches. Cultural glosses are the easiest. Viking style tombs shaped like dragon ships with knotwork and evil runes carved everywhere, Egypt flavored dusty tombs beneath a graveyard of burning sand, A Qin Dynasty terracotta army (with non-historical skeletons inside of course) and monumental bronzes in Zhang style, or a perhaps a Meso-American gloss. All would be easy enough to add, and suggest ways to conceal the fact that this is Death Frost Doom from a group that is in the know. As a general idea I think a re-skinning Death Frost Doom to fit one’s own game world is important as the events at the end of the adventure will be campaign changing. Death frost Doom’s best elements (the trapped doors and strange curses) can be slapped onto anything without losing any impact, so re-skinning makes a lot of sense.

5) Make the Undead more Interesting – When the party flees from the crypts and across the graveyard pursued by scrambling hordes of undead, it seems worthwhile to add a variety of strange dead to encounter. Yes there are child corpses and ghouls, but there isn’t much more here. It’s just boring “ewww a dead guy” – which in D&D is a monster that does not actually inspire fear or revulsion. A table of abominations (chanting lines of undead pilgrims stitched together like centipedes, ghost hounds, corpses with grafted on stone, animal or metal parts, spectral presences, scuttling skeletal hands etc, etc.) would be nice to help run the escape. I think one could even put Death Frost Doom into a modern game – I’d love to see a Boothill campaign change from cowboys and robbers to “Oh damn! Zombie army from the evil Pueblo!”

6) Change the “cult cabin” – There is much discussion within the module about an entire ancient evil nation, yet the cabin above ground is straight out of evil dead. This is a lovely homage to those haunted cabin movies, but really it doesn’t gel with the underground shrine so well - unless one were to re-skin the whole shrine as some kind of hillbilly nightmare of crude mineshaft style construction and sacrificial victims in flour sack body bags. A cabin would be fine, but it’s accoutrements (while excellent) don’t really feel connected to the tombs below. It might be something as simple as making the cabin a new addition with some ancient stonework as it’s basis to give the idea that the evil but inconsequential cult that was run out by villagers a generation ago was connected to some kind of ancient evil. Anyway this connection would work better if it was more concrete as otherwise the descent into the tombs is a jarring switch.

I should mention that when we played through Death Frost Doom in the Vaults of Pahvelorn, Brendan did exactly this, turning the cabin into an ancient wizard tower, while retaining everything within virtually unchanged. This worked quite well.

7) Help the GM Run the Escape – while the two pages of notes are nice, I’d like to see more in the way of game aides. I’ve mentioned some random encounter tables above, but I would also like to see some indication of just how fast the underground and above ground areas fill with undead. Since doing the escape right will require either meticulous time keeping (to be fair) or some great descriptions and events (to be cinematic) a time keeping handout would work wonders, as would a table of random events (sprained ankles, omens, confused poacher encountered in the woods) to help the players feel more frenzied and hectic as they flee from the mountain. Exposure rules, exhaustion rules and such would also be nice – but are unnecessary. Finally a bunch of bulky treasure would be a good addition (fancy tapestries, big bronzes) if it was easy to discover, but slowed the party. Players will talk about the treasure they had to leave behind, and the “drop the valuable and run” quandary is so central to the weird tale scenarios that Death Frost Doom emulates.

The above are simply I would do to Death Frost Doom to make it more playable for me. It’s an excellent published adventure - first, as a playable module and second, (perhaps more interestingly) as an idea/goad showing what can be done is a table top game.
Posted by Gus L at 8:27 PM