This mornings post at Tenkar's Tavern mentions the original helmet rules from early D&D. Specifically intelligent creatures supposedly swing for the head 50% of the time.  This of course begs certain questions beginning with are all metal helmets AC 3 (without shield), who can wear helmets, do humanoid monsters wear helmets and do thieves need leather (AC 7) helmets? 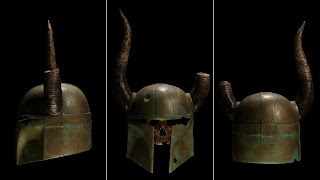 Really helmets must do something, they are 25 GP on the OD&D equipment list and given that price must have some utility.  Historical fact and even the slightest bit of verisimilitude calls for helmets to be important as well.  Helmets are pretty much the first piece of protective equipment people use, and the last to go as armor faded from the modern battlefield.  This last point may be why many people seem to consider helmets to be part of every suit of armor, a helmet is symbolic as armor and really the most important piece to functional protection. 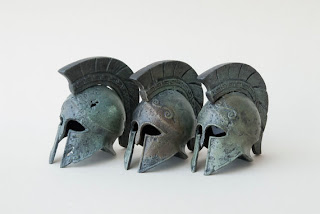 Still, helmets are on the original equipment list as separate expensive items and it seems like helmets should have an important mechanical effect.  Something along the lines of a lack of helmet providing a 50% of armed attackers bypassing armor, combined with an initiative penalty due to the vision obstruction of a helmet might work.  However, system complications are always the easiest thing to add when thinking about games, and rarely worth the trouble when it comes time to play.  Additionally, given the importance in fantasy art and literature of bare header heroes and heroines with glamorous hair, it hardly seems right to seriously penalize characters who want to be dashing and not wear a helmet. Below are a few simple possibilities that might both make helmets useful but not necessary. Long ago Brendan at Untimely cataloged various approaches to helmets as well, so I've tried to hit on only the simple mechanical fixes that might be useful.


1. Hat as identity - The Wampus rules.
Wampus County has several hat rules - several fun rules.  Hats provide a one point statistic bonus based on the type of headpiece involved.  This rule is great in the whimsical Frontier pastiche that defines Wampus County, and I like the way it encourages hat ownership and description.

In a more traditional medieval fantasy game, hats might function similarly, but only adding a bonus to Constitution, as a fancy metal helmet will in Wampus.  This could provide a few extra HP to a fighter type with the right stats and might make certain kinds of stat check easier.  It's not much a of a bonus, but it does offer some benefit and encourages helmets as flavor for characters that value Constitution.

2. Hats must be shattered.
I like this more than the Shields must be Splintered rules popular in some games.  Basically a helmet lets you ignore the attack that would have killed the character wearing the helmet at the cost of losing the 25 GP helmet.  At least helmets cost more than shields, but in order to avoid this becoming an exploit for rules lawyering type players, I'd also add that while the helmet prevents death, it does not prevent unconsciousness.  When your fighter's dented helmet goes spinning off into the darkness from a telling blow, the fighter goes down, with a huge bump on the side of his skull.

2. Save bonus.
A modification of the above rule, but rather than offering death immunity, the helmet provides passive protection form unexpected attacks and dangers in the form of a flat +1 bonus to saves.  This could be modified, perhaps only providing a bonus to saves where a helmet could have intervened (falling rocks, cobra spit to the eye) or only to the final "death save" used in some games to determine if the PC dies at 0 HP or is simply knocked unconcious.

3. Falling Bonus
Helmets help when falling off of things, or getting into crashes on moving vehicles. Perhaps all a helmet does is reduce the first 1D6 of falling damage to an automatic 1 point.  Suddenly 10' pit traps seem far less dangerous (unless they are filled with spikes, poison vipers or green slime) but are still harmful (1 pt of damage adds up when 1st level PCs have 1D6 HP).  This also doesn't do much to protect from longer falls (a 20' fall will still do 2D6+1) so it's not too much of a bonus.

4. As AC bonus
To make a helmet, like a shield, an item that grants a +1 bonus to AC is a risky sort of rule fix.  AC inflation is one of the more irksome elements of first edition D&D, with negative ACs keeping combat a festival of missed attacks at higher levels. I much prefer simple AC staying in the positive integers, so making helmets a bonus item, requires modifying armor slightly.  Perhaps limit armor to "light and heavy", with AC 7 as a base for light and AC 5 as a base for heavy.  This way one could have +1 armor pieces for various fancy pieces of metal armor (greaves, vambraces, helmets) with a bonus limited to Fighters, providing them AC advantages.  This is a serious subsystem change (though not to my mind a terrible one).