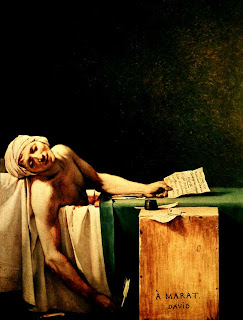 Of late I have adopted the Save vs. Death system for reaching zero HP, a method introduced to me Brendan in his Pahvelorn game. I've explained my reasons for elsewhere, but have been doing some further thought about it as I play higher and higher level games.

Generally the "Death Save" used is the poison save, which benefits certain classes more than others, but the poison save in Labyrinth Lord is often very easy, and becomes almost farcical when a PC levels up.  Add bonuses to this from items and potentially Constitution, and survival chances are very high.

A persistent problem in my HMS Apollyon game has been lack of lethality - and death saves as opposed to negative HP systems seem a good way to handle it.  However, at higher levels this still amounts to a game with very little risk of death - which is fine, but not in keeping with the world I am trying to create.  Below is a revised death saving throw system that adjusts things to a place that I think is more like the one I want.


This may be seen as a feature, with characters becoming increasingly difficult to kill as they level up.  Still for me this feel a bit wrong, characters become increasingly hard to kill for a variety of reasons as they level up.  Increased HP, magic, better saves and even player skill all make experienced adventurers die really hard. Perhaps an additional "miraculous survival" is less important at higher levels.

Instead of using the above table, which is further complicated as there are certain types of character (such as froglings in HMS Apollyon), that I envision as highly resistant to poison, but not especially tough, I intend to use a table that makes it easier to die as one levels, a dedicated "Death save".  I think I'll also eliminate a second save from save vs. death situation using other saves.  That is to say, when you drink poison, you get one save and it's a poison save.  So Save vs. Death is really for direct damage or other automatic death situations (like artillery fire) and it will always result in incapacitation until healed and permanent damage (with a possible exception if there is a doctor about).


While this numbers may seem random there is a logic for them, my reasoning is as follows by classes.

Clerics - Generally have good saves, the best for humans, as they are close to the divine.  The gods simply don't let Clerics die easily. As they increase in power the save gets worse fairly quickly, because divine protection is more immediate and provided through spells and powers.

Fighter - Normal humans aren't that robust, but martial training makes them tougher.  Still the ability to grit a bear it is doesn't really increase with level, and quickly loses its power over horrible wounds.  Additionally a high level fighter, with her huge stack of hit points, should know when to pull back from battle, and I always presumed that a big part of that HP was the ability to ignore wounds.

Magic User - Unseasoned a magic user does not deal well with serious injury, or at least any better than a normal person.  With a deep connection to the arcane (5th level when MUs become truly potent wizards) they develop the ability to sustain themselves through magic and frequently seem to overcome the physical form to a great degree. At higher levels this ability never really wanes and therefore Magic User death saves are some of the best at higher levels.

Thief - Thieves aren't much more robust than normal folks, but they are lucky and quick, They tend to die more easily than fighters, but luck and speed will carry them well into the higher levels.

Elf - Elves start with robust death saves, they are creatures of magic and strangeness after all.  As they level though, elves become less attached to this world and thus die more easily

Dwarves and Halfling - Absurdly tough or absurdly lucky.  Even powerful dwarves and halflings have ways of surviving miraculously that seem unnatural.
Posted by Gus L at 10:59 AM