Map of the Grey Bone Light

MAP OF THE GREY BONE LIGHT

A few months ago I posted this description and random table of small encounters/lairs on the "Grey Bone Shoal".  Below is the map of a lighthouse fortress affiliated with the ship eating menace to navigation - now a derelict. I may be using this map as the basis of an adventure for a contest, but since there is less than a week to finish I'm not sure if it'll happen.  It will be a good way to practice my original edition brevity so as not to make the 25 locations into a 50 page epic (like the Obelisk of Forgotten Memory).

I am seeking idea help about what might inhabit such a place. 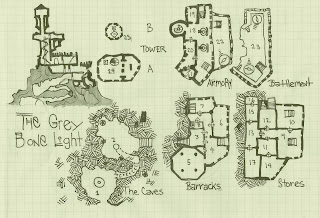 One idea for the light centers around the concept of wreckers using the light to trick vessels into running aground and then slaughtering the crew and looting the wrecks.  Something will be in opposition to these wreckers, some force that wants the light to work.  I think ghouls or aquatic ghouls are the most obvious choice, inhabiting the tidal caves on the lower part of the fortress.  What lurks above I'm not sure - maybe phantom sailors - an inter-undead faction war could be fun, but ghouls are overused monsters.  Bandits, Deep Ones or something could be a goo replacement.  I've already decided that a nest of brine (water) weirds lives in the fountain at the bottom of the caves climbing free to hunt at high tide - that's more a trap than an encounter though.  I like weirds as an idea, nasty elemental animals that are hard to destroy because of their elemental properties - threw a random encounter "Rust Weird" at the Apollyon group last night and surprisingly they managed to defeat it.

Other ideas include making this a lair for some kind of dragon, a long serpentine thing that hunts from the Tower gallery and preys on shipping.  Maybe Black or Blue, and fairly young - most likely a unique mottled grey beast that breaths poison fog or despair or something. There are also "burning mirrors" of the Ancient Syracuse/Dadelus style as mounted siege weapons, but maybe only one will be working with the others providing obvious traps to avoid.

I am unsatisfied with my thoughts on what lives in an abandoned lighthouse fortress though, so if any reader has ideas about what would lurk in such place let me know.  Unleashed trapped outsider entities or broken automaton soldiers might be good, maybe even bandits?  I just need some factions and undead are so overused.