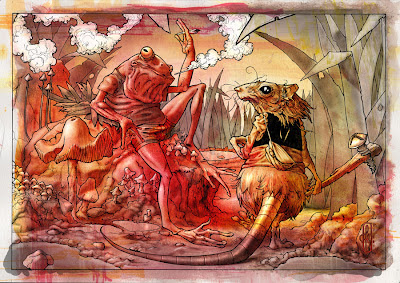 Froglings are the most common non-human race aboard the Apollyon, they are amphibious humanoids, ranging from 4' - 5 1/2' tall, with skin in various shades of brown, green and pale beige.  Their large mouthed faces and bulging eyes give them an uncanny resemblance to terrestrial frogs and they share the frog's life  cycle and biology. Froglings are nimble and magically sensitive, making excellent scavengers but middling sorcerers.  Clannish collectivists in nature, Froglings are are not raised by individual parents, but in spawning pools, where the eggs of the entire tribe are placed and aquatic young cared for.   Froglings were originally a tribal people, and outside Sterntown they still are, however several generations of exposure to the Apollyon's human culture have changed Frogling society there to a great degree.  Traditional hunter, gathering and water shamanism have given way to industrialized fishing, submarine engineering and the cult of the Leviathan (though Shamanism remains a key social glue).

How Froglings arrived aboard the Apollyon is unknown, the oldest Frogling fairytales tell of the Batrachomyomachia, an ancient war with rodent like humanoids that drove the froglings from their ancestral lands.  Froglings originally built a series of mud and seaweed villages on the Port side, amidships and lived a hunter gather existence.  The villages nearest humans traded with humans, and those nearest to the Fishmen traded with them.  Eventually the Fishmen, in their typical incomprehensible way, declared war on the Frogling tribes and slaughtered a great many.  The humans ignored Frogling suffering, but continued to trade - some say this is a slight that the Froglings have not forgotten.  When the battle of Devil's Tombs and the midship occurred forty years ago it came as a suprise when the largest Frogling tribe suddenly appeared and fought beside the humans. Frogling water magic proved potent, there elemental allies powerful, and  frogling warriors effective, especially at protecting human lines from attack from the flooded decks below.  The leader of the Froglings then, and still today, was a grizzled brown shaman king, named Boss Wug, who is never far from his elemental ally, an enormous Ondine known as "Abyss Crusher" made of oily black water filled with battle trophies and potent charms.

Boss Wugg controls Frogtown without interference by the Stewards,  aided by a circle of Shamanistic elders, a cadre of specially picked elementalist warrior enforcers, and by Froglings natural communitarian tendencies. Froglings have become an important minority power in Sterntown and their farming, fishing and magical abilities are necessary to its continued survival.  Recently Froglings interests have come to take over many of the small craft and trade jobs in Sterntown, to the resentment of some of the Crew and Passengers, but the acceptance of many, especially groups that work the most closely with them, such as the fisherfolk.

Frogling culture is shamanistic in nature with every frogling having a  spiritual connection to water, and a conception of it as a living thing.  Froglings also tend to be a utilitarian people, as most froglings see themselves as part of the clan first and individual second due to their communal family structure.  Thus exile (the fate of most Frogling characters) is a terrible burden - though less upsetting than that of a passenger exile or flying monkey, because no frogling will ever be completely cut off from his people, or Frogtown.  Froglings are motivated to seek reentry into Frogtown society, and only a rare few don't return if possible.

As a practical matter Froglings are Magic-user/Specialists picking skills off both Specialist and Magic-User tables.

Froglings are dexterous and agile, but relatively frail due to their small size, they also tend to be dull and uninteresting to non-froglings due to their rather immobile faces and communitarian ethos.

Advancement and Saving Throws:
Froglings Save as Halflings and use the same to-hit tables, saving throws and advancement as Halflings (or gnomes if one must). They receive 1D6 HP per level.

Racial Abilities:
In addition to their Swimming Abilities, Froglings may hold their breath for 3 plus their Con bonus turns while underwater and hide in swamps on a 2 in 6.

Skills :
Using the HMS Apollyon skill tables Froglings automatically receive (3) points in Swimming. Additionally they will have 1 Skill point of Specialist Skill and 3 additional points that may be allocated to any Specialist or Magic-User skill, though no more than 2 points may be stacked and the first point of Magic-User Skill must be in Wild Magic or Elementalism.

A Frogling may voluntarily forgo magical abilities and advance normally as a Specialist if he or she chooses to.

Note: that Froglings may use any weapons or armor their strength allows, but prefer light armors, spears and crossbows (spear-guns) due to their utility underwater.
Posted by Gus L at 7:03 AM