HMS Apollyon - State of the Ship, Session VII
Below is the a map showing Exploration of the Hull.  Currently Only Deck 9 has been investigated. 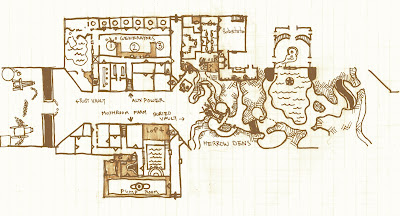 1) The Craydogs - Semi-Intelligent, non-verbal crayfish headed dogs.  Believed extinct - wiped out and made into crayrolls, cray salad etc. by Gearmen.

2) Merrow Men - Intelligent, utilize mutagenic flesh sculpting, numbers have been winnowed but are still unknown.  Dwell in caves carved from junk pile in buried vault, and possibly in other areas to the North of it. Have sued for peace and been contacted on behalf of Sterntown's criminal underworld.  Promise not to attack any wearing white arm band if there caves are respected.  Seeking head of Son's of Vanderdecken leader Marco Templeman (missing) and promise magic items in exchange. Have concealed tunnel leading to Substation.


The Current Status of NPC Parties:
1) The Gearmen, Exhalted of the Ship Spirits. 16 Effectives, mostly armored fighters and clerics in good bronze and steel armor. Some Blunderbuss armed retainers. Led by Brazen Gear (C2). Throwing will attended feast and revival - have rented large tent, food promises to be excellent, oratory less so. May have plans to colonize Mushroom farm/Auxillary Power

2) The Sons of Vanderdecken. 4 MIA, Well equipped in high quality armor and gear. Led by Marco Templeman (F/MU 4/1). Unknown, rumored to have been exploring Aux Power when lost, Gearmen found no evidence of them while depopulating Auxilllary power of Craydogs.
3)The Vory. 8 Effectives, leader unknown, Obvious low ranking thieves and assassin's from the underworld of Sterntown.  Were spotted firebombing the pump room last Session, returned cheerful, but not obviously carrying anything.

2) The Vory - Rumblings that the underworld is considering getting in on the scramble for wealth from the hull.  Known Thieves in law seen hanging about Rustgates (usually with perfumed  kerchiefs in front of their noses) and increased activity around Madam Bibi's establishment.  Madam Bibi sent Vess a note with a lovely Pearl medallion worth 100GP.  Note says "Thank you for delivering that package, please check for a reply - a token of my esteem is enclosed."

3) The Factors - Trade is picking up (why is unclear - speculation mostly) and talk of retaking the Machine Shops is high.  Funding opportunities are available if party can show record of success and is willing to map a way to Deck 8 machine shops - presumably up a  Deck to the Aft and Port.
4) Church - A young priest of The Queen has leased a storefront church in the Rustgates - attendence is low, holy water sales reasonably high. Will be attending Gearman Revival - there may be hijinx.

5)Frogtown - Magicman has arranged a meeting with his patron an elderly crew-class magician (human) named Potifius Snee for Sir the Fist of Uther.  Can discuss the meeting pre session or know the following items are available:
Chicago Organ Grinder, A 1921 Model Thompson Submachine gun with two stick magazines (20 shot) of normal ammunition and one of mixed Silver Bullets and "Screaming bullet", which let out a magical unearthly shriek and disorient targets when when they miss. The gun is old, clearly not from the Apollyon and has been carved with various crude symbols.  It's grip and stock appear of have been replaced with laminated bone that Vess could tell you is human. 10,000 GP
Flesh Borer - A strange throwing dart made of evil looking Black Shell and covered in primitive magical designs.  Apparently it digs for victims hearts to drink their life's blood on a successful missile hit - but then it becomes sated for a while and won't do anything even if recovered - 5,000 GP
Inscribed Devil Shells, (Strange otherwordly shells that will distract outsider entities) more powerful due to Snee's inscriptions - 300 GP (5 uses worth of tiny shells)
Brimestone Shot, 5 rounds worth (Makes fireball like effect for muzzle loading weapons) - 250 GP per shot.
Undine in a Jar,  Small (Cat sized) serpent-like water elemental with delicate human face. Seems unhappy trapped in jar, Snee can't vouch for its temperament or loyalty as it is his as the result of winning a bet.  2,000 GP.
Ghost Salt, Enchanted necromantic salt (illegal substance) supposedly wards against undead, enough for a 5' Diameter circle costs 500 GP.

6) Uptown -Dull, it's just so dull the endless round of dinner parties balls and orgies.
7) Stewards -After last weeks' successful expedition there has been a bit of excitement as the Stewards are hiring engineers, draft dogs and machinery to recover a cannon from the Buried Vault. This is still in the planning stages, and the Stewards have asked your group to reconnoiter the Substation entirely and put any undead you find to rest before they mount the expedition.  If you don't want to do this they will hire others but the reward for the cannon will decrease.
8) Henchman Available for hire:

B. Brummy - Twisted 3' Tall dwarf of unknown origin. Pugilist know for punching a large fighting dog named Princess to death in a man-baiting match a few months ago.  Bites have healed and he will work for 1/2 Share.  Wears studded leather Vest and uses bronze studded cestus and known to like a fight.

D. Hop the Link.  Young Orphan frogling barely out of tadpole years, quick fingers, hates working.  Lantern on 10' pole, may have knives hidden on person (fervently denies it and claims to hate fighting) - 20 GP to hire

E. Brutvs - Large dog (about the size of a pony with incredibly dense dreadlocked fur that have been interwoven with metal bars for protection) - dagger like bronze plated teeth, spiked collar, obviously battle trained (not obviously trained otherwise).  Small boy "owner" will sell him for 400 GP (which is a decent deal for a fighting dog of that size).
Posted by Gus L at 12:29 PM