Reskinning is useful, the Crystal Jaguar below is mostly a Displacer Beast with minimal mechanical changes.  The advantage I have using the Crystal Jaguar is that my players (only one of whom might actually know what a displacer beast is really) have no idea what these rumored terrors are, and now Grimgrim's god is trying to get him to sacrifice one to gain favor (XP and access to the 4th Level).  Needless to say,  the players are a bit worried, far more than they would be if I told them "go kill a displacer beast". 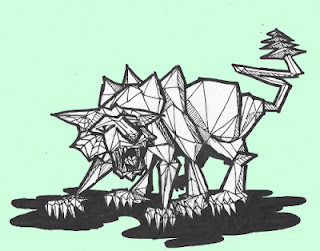 Strange feline predators that haunt ruined ancient places, dense forests and tropical jungles. A crystal jaguar appears as a large (4' tall at the shoulder) cat like beast with six legs and a spike covered tail. The excess number of limbs is not a crystal jaguar’s most distinguishing feature however; the cats are composed of dazzling, reflective substance similar to faceted gemstone. The facets shift and transform as the jaguar moves creating a scintillating display that makes it almost impossible to determine where exactly a jaguar is at a given time. Because of this dazzling effect they are immune to almost all missiles and difficult to hit in combat. These cats are vicious predators, and like all cats, extraordinarily dextrous, gaining a +1 to hit on all attacks.

Crystal Jaguars are the result of ancient super-science. Their crystalline flesh is a matrix of nanotechnology, a colony of microscopic self-replicating bots, that share a dumb colony intelligence, about that of a chimpanzee, and a set of adaptive protocols honed by previous generations. Entities like crystalline jaguars are the result of a dubious solution to the danger of ecophagy (where self replicating nanobots devour the environment through unchecked growth). The nanotechnology within each Crystalline Jaguar is aggressive towards all other nanotechnological entities and has adapted itself into the jaguar form as the most efficient means of combating other entities. Small groups of Jaguars will cooperate to gather more living matter for sustenance and replication, but these groups are always identical copies and will attack other groups of crystalline beasts on sight if possible.

Crystalline Jaguars are ambush hunters and excellent climbers, moving almost silently through the trees on their many limbs and dropping to attack from above. Each jaguar can rake with it's front claws and bite with it's stone-like teeth. Jaguar's most dangerous attack however is from stabbing or scything strikes of their razor sharp tail.

Jaguars are opportunists and hunt rationally, they seek any living thing to devour, and are not particular, often grabbing a single victim and carrying them off into the trees for feasting and incorporation in to the Jaguar's matrix. Jaguars do not collect treasure, but when destroyed, their shattered substance often contains valuable gems.