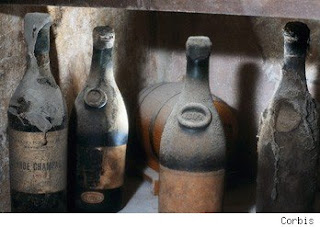 26. Deep Cellar – Clear running water rushes through this natural cavern. Once it supplied the brewery with water and now the stram provides the degenerate halfling tribe with it's water and the blind cave fish who thrive in the rich fungal pools and cave insect filled stream that dominates this chamber. A narrow wooden ladder formerly descended to the pebbly and cave fungus strewn floor of this room, but only holes in the rock remain to hint at it's presence. It is 80' from the cave floor to the lip of the pit described in Area 15. The rich environment holds only one real danger, the pool marked with an X has a froth of vibrant green slime (yes, sometimes it's actually green) that will injure who touches or wades through it.


In the niche in the Northwestern portion of the Cellar is one of the Brewery's true treasures, rack of several cases worth of aged Brandy was hidden here 21 years ago on a welded iron racks. Some of the brandy has gone bad, and some is absolutely divine. Most of it is in distinctive squat glass bottles with raised lettering that read “Weedstone – Very Special Longtime Old Pale”. Green wax seals each bottle and is marked with the symbol year it was put away in. The brandy by year is as follows (roll 2D20 to determine which bottle is pulled). Yes, it's worth 2,164 GP but what PCs will know how to sell fine brandy, even if they don't drink it all (which might net them ½ XP)? Also on this rack is a stainless steel scroll case containing a wax and ribbon covered trust deed signed by old man Weedstone himself. It grants title to the Weedstone brewery: land, building, trademark and good-will. The assignment is blank, and anyone who pays a good lawyer or bribes a corrupt official (approximately $1,000GP) can write their name(s) in and get the whole lot free and clear (though if the Game Master is cranky I suppose it could come various debts and encumbrances).