SESSION XI - Part I - The Wheels of Injustice Turn Slowly.

Faced with an enraged patron the PCs return to the brewery and discover that stranger forces than the grasping hands of crime lurk within.  Huxley takes a dangerous wager.

A STATISTICAL UPDATE (As emailed to players)

After XP Grimgrim and Nell are 3rd level! Drusilla is 300 shy of 2nd and the rest of the party is rapidly closing  in on 3rd level.

The Adventurers return home with their new furniture and treasure and get a few hours sleep before being summoned by the exalted brother (and Lt. Tsu).

Monty appears with a hired carriage and warns the party that the Lt. is not happy, but that his own boss Joohanssanville seems pretty content.  Monty says that the looting of the upper floors of the Old Brewery is ongoing, and that Joohanssanville's bravos have chased off the few remaining guards and discovered a secret first floor entrance.

Joohanssanville's guardsmen (seemingly at a higher state of alert) again usher the party into his walled garden and the Exalted Brother begins a short morose monologue about how he is sad that the baby was sent North and lost.  He won't blame the PC's though and would be glad to offer them a bounty contract to head North and recover the baby from the tower of the Wizard who is backing the Peacock Syndicate - but they must finish their dealing with Lt. Tsu first.  Additionally he notes that "A great deal of dangerous narcotics were recovered from the gangsters thanks to your efforts and will be destroyed after examination by the proper authorities.  Additionally, the captured Elf 'Yarrix' is responding to questioning well - Denethix owes you brave citizens a debt." The Exalted Brother Pauses Dramatically and states "More importantly! While you failed to recover the baby you showed everyone at the Brewery and everyone who hears of the Brewery that Brother Joohanssanville is not to be crossed, and that citizens under his protection are not to be harassed."  With this he hands Lemon a velvet bag containing a considerable number (500GP) of gold pieces.


The party asks if they might speak to the elven gangster they captured, but Joohanssanvile says they will have to wait until they've spoken with the Lt.


Tsu is ushered in, this time in full plate armor, covered in fist themed inlay work.  He's brought four equally well armored guards, equipped with rifles and scimitars.  Tsu launches into a viscous critique of the characters incompetence and inability to deal with the "passel of vagabonds" on the first floor. He reiterates his offer that they clean out the hobo, burn down the Brewery or find the deed to the place. He then claims that the party is in debt to the Fist, and Lt. Tsu specifically for 'overlooking' their violence in the past - and that because of their tardiness the 1,000 GP reward has gone to 500 GP and a "pardon" for the "mass killing of priests in the Southern Marches".


The party is reluctant and there is some discussing about sleep spelling and rushing the cop, but this is rejected as likely to make Joohanssanville very angry. Instead (per Hux's suggestions) the party agrees to go back into the Brewery a 3rd time and see if anything can be done to find Tsu his deed.


After the Fist officer leaves, Joohanssanville returns, and when Lemon mentions that they are having difficulties with Tsu suggests that it is easiest for the party to simply do what the Fist says, as Tsu is "a dangerous man, perhaps becoming too dangerous, but untouchable as long as he has the Vizer's ear."  He then gives the adventurers some small amount of additional coinage and tells them to go to a party his men are throwing in the common room of an expensive cocktail lounge called "The Tumbling Falls" near the Voltic Cataract.  While there he'd appreciate if they spent freely, boasted a bit about their prowess and mentioned the destruction of the Peacock Syndicate.  The party should return the next day to speak with Yarrix, who is unconscious currently but seems eager to talk.


The adventurers spend the rest of the day asking about for information on the brewery, and specifically if anyone knows more about its history.  A trip to the Palis Public also informs them that they have been accused of the unlawful murder of "over ten disciples of the recognized deity Furter".  There is a trial date set for the end of the month.  [Someone mentioned warrants and I explained that warrants in Denethix are only issued after the trial - usually a trial in absentia] 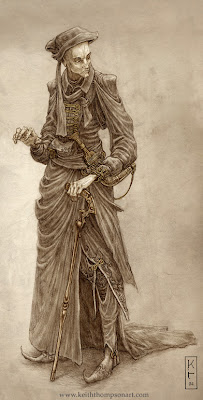 Not being foolish, the party heads to a lawyer, while Hux goes to discuss the situation with the Moktars.  With Lemon in the lead the rest of the adventurers sidle into the reputable offices of Habe, Yeus and Grizzlarx and meet with the junior partner  - an elf named Grizzlarks with a very expensive suit (a surprisingly inoffensive olive to both human and elven eyes) and a an unctuous smile.  He explains that a consultation on criminal matters is 300GP and then a retainer can be assessed.

Lemon ponies up (this mass-murder charge has the characters scared) and they explain the whole situation from start to finish (silly attorney players fail to realized that attorney client privilege is not quite so strong in Denethix... I think this is my first incident of being a cruel GM and using thier real world knowledge against them).  Grizzlarks makes various noises and says that for another 300 gold he can have his assistant look into the case at the courts, and  find out who filed the charge.  He thinks it's likely a political charge (even if disgruntled priests may have brought it) as the Obelisk has been traditionally considered outside Fist jurisdiction and furthermore religious crimes (like slaughtering priests) are usually handled by the ecclesiastic authorities (or lack thereof).  Grizzlarks continues and states that if this goes to trial it'll be a nasty one - because someone (Tsu most likely, maybe Joohanssanville) has decided the party should be proven guilty.  The penalty for mass killing is death of course - in a very unpleasant manner, but given the political nature of the charge it will likely be reduced (no promises though).


To fight the charge in court Grizzlarks will need a retainer of 3,000 GP.  The party is shocked and declines, but agrees to 300 GP for research.  Grizzlarks shrugs and recommends that they ask for a "Trial by Casino" then, but will not explain what he means.


Grimgrim heads to the temple to commune with his god, and notes a priest of Furter in a copper scale robe loitering amongst the other priests, but does nothing except exchange furious glances.  For 100GP Grimgrim gets a brief meeting with Monstcrom, who states "Ah, you return and have continued to bring the doom of steel to the unbelievers, abominations and the faint willed - let the power of Monstcrom fill you!" Grim feels a certain amount of divine understanding in his head - as if he is better able to manipulate the universe and better able to speak to Monstcrom.  Monstcrom continues "You called upon me to avert your own doom last night, and for that you must make sacrifice - bring me the crystal cat I desire should you wish to penetrate deeper into the mysteries of the gods."

Huxley is able to meet with Rum-Tum, the old Moktar fixer, easily and the Moktar reports that he's heard good things about how the party is treating Greymol and Gurgur.  He says he doesn't know anything about the charges, but reaffirms that Tsu is a bad, very dangerous man.  Rum-Tum also tells Hux that for some money he can help Hux and his friends flee town for the Certopsian and likely keep them safe, no matter who is after them - though they may have to live with tribal Moktars for a while.

With their heads full of trouble the party goes to Joohanssanville's bar party and does as he suggests, talking up their adventures to any who will listen.  Many of the Exalted Bother's dandies are wearing bits of ridiculous clothing from the dead crimelord's closet and corroborate the party's stories.


The next morning the adventurers are a still worried and head back to Joohansaanville's compound to speak with the captured elf.  They are quickly led into a small room off the barracks, where the elf named Yarrix sits on a small stool, wrapped in bandages and wearing a clean robe.  The elf appears much worse for the wear, with his incisors missing and a badly bruised face. He is calm and willing to talk without any coercion.  He begins unexpectedly by looking at Drusilla and saying "I finally placed you. You must be Kopaz's daughter Druizzilnax, rumor had it that you ran off South rather than marry into the Devoured Suns - makes sense I suppose, but the Commandant was not happy - don't you recognize your cousin, Yarrix?"

Drusilla remembers a cousin from home she hasn't seen in years, a big elf named Yarrix, who certainly could be the battered warrior before her.  She's not happy that her past has been revealed, but Yarrix might just be telling the truth.

Yarrix goes on saying he and a few other young elves were hired by Mr. Donnybrook, the Brewery boss, and came south in a caravan filled drugs and booze.  Donnybrook claimed he worked for a Wizard, and indeed gold and sometimes drugged captives were sent North with some regularity in exchange for mroe strange purple drugs.  Yarrix knows a bit about the Brewery, but nothing about a deed - Donnybrook didn't have one and Yarrix has never seen anything like it on the upper levels.  He can't say much about the first level, though one of the back widows (the one closest to the right corner) is a weighted secret door.  There's a Grunkie fighting pit in the basement - it's almost independent of the drug den, and there's some caves underneath it.  Yarrix says that Druizzilnax shouldn't worry about him, because he's going to be sent home by Joohansaanville to arrange a ransom for the stolen baby.  More ominously Yarrix states that he'll "Remember Druizzilnax to the Society".  After this he appears to go to sleep and the party prepares to enter the Old Brewery.

Rather than enter the front door the party goes around back and indeed the boarded window Yarrix mentioned is a concealed, counter-weighted door.

Note: I feel a bit bad that there's no action in this report - the PC's literally spent an hour and a half asking about and trying to find good legal representation.  Apparently my players weren't getting enough trial experience at work.  It plays out pretty funny I must say - especially when they discover that possession or perusal of a Denethix Code book is a crime for non-lawyers in Denthix (I was not turning my campaign into Gonzo Law and Order - or inventing a 70's post-apoc legal system - I am using Vornheim's tables in fact...)  I made a six entry "You're hiring an attorney table for Denethix" and may post it expanded a bit.