The Pit of Pavelorn - Part I - Into the Pit

Brendan over at Untimely ran his inaugural session of his Little Brown Book - extreme OD&D persistent world "The Vaults of Pavelorn".  It was a lot of fun, and we even introduced a fellow to D&D (I think).  The rules are easy and the framework allows a lot of play.  Brendan is a good GM, he's very even handed - and isn't remotely malicious (though I can tell he'll let the dice kill a character if that's what the dice want) and his dungeons don't feel stale - even if in Pavelorn's case the world is extremely standard OD&D (at least so far).  We fought giant rats and bandits (see very old style) - too much fighting was a mistake I believe, as it isn't rewarded in Pavelorn and it's extremely deadly. I recommend getting into a session if you happen to have some time off Monday nights.

It's always difficult for a demobilized veteran - especially one who departed from service with a full compliment of the finest heavy infantry gear a solider in the tyrant's service could hope for.  Yet here was the quandry facing Lune ChMehet and his hairdresser Bol O'th'Knee.  The loot and the war finally ran out in the desolate town of Zorfarth - half abandoned and next to the pit of Pavelorn, where a castle once levitated into the sky leaving an unwholesome chasm with an evil reputation. 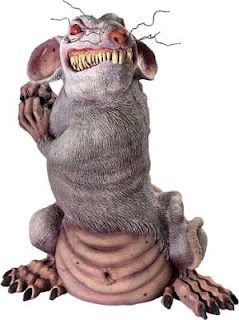 After meeting up with a pair of equally dissolute hoodlums, a arcane initiate and a well armored holy warrior of one of those mysterious mystery cults, Lune and Bol were soon looking for work.  The local guardsmen suggested the a merchant family (and some impoverished farmers) had recently had members of their family stolen away in the night. Resolving to plunder themselves the wealth of Zolfarth's stolid citizen's the band set off to discuss the situation with the proprietors of the general store, the Tipitz family.

The Tiptiz's son, a trouble maker, and had vanished a month before after a cloaked figure surrounded by an armed band was sited on a nearby hillock.  After haggling the party gathered a retainer of 30Gp and  set forth to investigate.  A large number of footprints converged on the hillock, and led both West and towards the pit.  Following the prints toward the pit the adventurers soon found themselves in a lonely chamber down an antique stair.


The heavy metal door had been oiled but the room beyond was bare, except for a corpse in the center of the floor.  Using poles and a pike the adventurers moved the body and triggered a large crossbow trap that shot across the center of the room from the West wall.  The corpse was that of a mummified gray monstrosity, with thick rough skin and small tusks.

The adventurers examined the doors and discovered that the one to the North East was recently oiled.  Opening it reveal six roughly clad woodsmen, heavily armed and playing cards.  A brief tense conversation ends with woodsmen trying to extort gold and the adventurers closing the door and backing away.  The adventurers placed several piles of rocks in front of the door to protect against the bandits sneaking up on them.

The Southern door leads to a room bisected by a terrifying chasm (albeit only 20 feet deep), while the South Eastern door opens on a room filled with broken crates and strange pipes with air flowing through them.  After breaking a pipe it is decided that there's nothing to be done except attack the extortionist bandits.  An elaborate trap involving a trip pole and pool of oil are prepared and Lune yanks open the door.  The startled bandits fire one crossbow bolt at him, but it sticks into his shield and then Bol hurls oil into the room followed by the torch and turning one crossbowman into a pillar of flame. A second bandit is distracted by the propped up corpse of the monster mummy and fires at it. In an effort to escape the flames two of the bandits leap into the room with the party, but one slips and knocks himself unconscious.  His companion lands a blow on the stout and clumsy (due to his bad knee) Bol, who survives, but finds he doesn't much like ax wounds.

The wizard and his own servant manage to trip up the bandit who cleaved Bol, but knock Bol down as well. The prone bandit is finished off by mace and sword.  Three bandits remain in their room and more oil goes through the door.  The bandits shut the door and scrapping noises are heard within.  Lune, his blood up, rips the door open again and finds an empty smoke filled room.  A concealed doorway stands open to the East and Lune follows quickly, finding himself on a slate roof, sloping towards a courtyard and with no bandits in sight.  It's far to strange of a turn of events and Lune returns to the unconscious bandit.  The bandit is woken, and frightened, but he reveals that the bandits have been sent down here by their leader, Tovax, to find what happened to some of their companions who disappeared the same way as the villagers.

The bandit's name is Gavin, and with some cajoling he's convinced to aid the adventuring party with a promise he'll be returned to Tovax and that an arrangement can be worked out between the bandits and adventurers.  Either that or death threats have convinced him to play along.

The adventurers explore the roof, finding a large villa, standing in a cavern that stretches off to the North and East.  After hearing gurgling screams to the North (presumably from Gavin's companions) the band decides to explore the villa.  The courtyard contains a dusty fountain and large, dog sized rats mill about within.  The rats scatter when one is cloven with an axe, but return when Lune begins to climb into the courtyard.  scurrying back to the roof, he manages to spit one with his pike while Gavin acts as bait, but the rats again flee.

When the rats don't return the party decides to hack through the roof and reveals a large room with a strange, sparkling table beneath.   The wizard wants this table, but the roof is too thick to carve a man-sized hole in.  Gavin, Lune and the Cleric descend to the courtyard and surprise eight of the huge rats.  One goes down to a thrown ax, but the melee quickly turns sour.  Gavin is almost instantly mauled to death, his entrails scattered about by the rats dagger fangs.  Lune finds a rat on his throat and it worms under his thick armor savaging him before he can throw it off, he's barely standing after the injuries, but fights on.  The Cleric loses his war hammer in a brutal tussle with a pair of the dog sized rodents, and missiles flung from above miss terribly.  A figure appears in the Northern doorway to the courtyard, and menaces the struggling party.

Luckily the deceased Gavin provides a distracting morsel for three of the rats.  Still the adventurers persevere - mostly thanks to the distraction provided by Gavin's corpse and tiles flung by the quick thinking wizard.  The Cleric's dog apparently has viscous ratting instincts and also accounts for two of the rodents.  In the end the party is exhausted and the mysterious figure has vanished back into the Northern doorway.  The adventures quickly dart into the room with the table, and discover it is a beautifully crafted model of a garden, matching decayed murals on the walls.  The silvery sparkle was created by rivers molded into the table and filled with quicksilver.  Titling the table the band managed to recover two flasks of Quicksilver and spill another flask worth on the floor.

Teh table was resistant to Lunes searches, and too large to move without tearing down a wall.  Leary of further encounters (Lune was badly injured by the rats) the party decides to head back to town, bringing Gavin's corpse along for proper burial.