As a follow up to the post of Beni Profane - here's the rest of the Pahvelorn party (with the exception of Sarin the Cleric - who was not around this last session).  All were drawn during the tragic session.  A short blurb is below each of them. 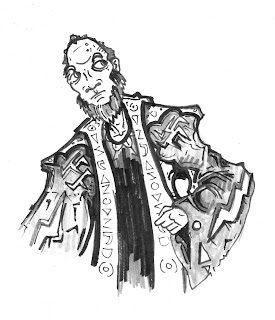 Ogum - The party's current magic-user.  His master himself a former apprentice was torn apart by skeletal rats.  He also knows that the first warlock in the party, a now almost forgotten fellow named "Margo" was strangled by a skeleton.  He should clearly be afraid of skeletons.

It's not clear Ogum wanted to be a magic-user, rather he had magic use thrust upon him.  He's not really suited for it, but he finds himself with a pile of scrolls, spellbooks and magical bric-a-brac.

His apprentice is Eahrianna - an orphan moppet of 12 years old who was the former apprentice of the mad wizard Lovitar the Bleak eyed, who Ogum, Higgans and the rest of the party slew. 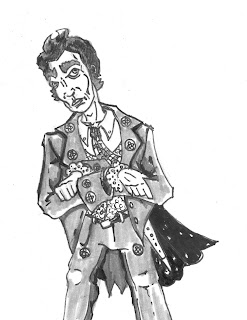 Satyvati was a cheerful sort for a wizard taking up adventuring to pay his creditors after fleeing his home town.  He liked the finer things and spent a large amount of treasure on clothes and a house (which the party have now taken).  He was a skilled magic-user all the same - and quite effective with less combat oriented spells.

Sadly he was talked into seeing is "Protection from Evil" work on stone guardians.  Apparently they weren't evil, and before he could turn tail and run his was punched through the head by an 10' tall statute. 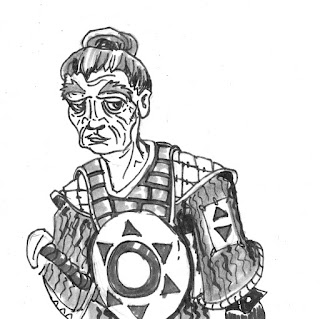 Druna is not an adventurer, or at least he never wanted to be one.  He was a rich man's body servant, and seemed rather content at that job.  Yet when his master fell on hard times Druna followed him into a new career as a delver in slime filled caverns and plunderer of ancient barrows.  Faint hearted and useless at first, apparently Druna had been holding out on his master as he has had some obvious combat experience in his 59 years.

No one is sure where he learned to fight: banditry, military service or gladiator pits.  All are possibilities, but Druna isn't telling. 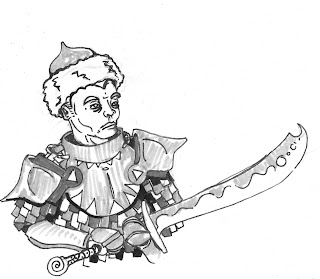 Tarvis is the party's less contemplative Cleric.  A crusader for the Ancient Empire (The established religion in Pahvelorn) he's a bit the bruiser and door kicker.

Tarvis is also on the town counsel of Zorptah. His clerical rectitude and zeal making up for any lack of education and intellect.

Tarvis is accompanied by Darullian, a local Pahvelorn farm boy recruited by Lune (deceased) in a crossbow contest.  Darullian is both smarter and possibly more rational than Tarvis but the two work well together.

It should be noted that Pahvelorn is one of the deadlier games played on Google+ that I've seen - 4 PC's and 3 Henchman have died so far in the Pits, which is pretty high given that there is a death save. This is all the more surprising because the party is generally very cautious and frequently goes through a large number of 10' poles, ropes, iron spikes and similar items..
Posted by Gus L at 11:25 PM