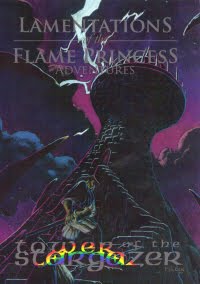 TOWER OF THE STARGAZER - As converted to Pahvelorn...

This is a play report, but it's also a review of playing tower of the stargazer using OD&D rules as made sensible and brutal by Brendan of Untimely.  I note that the party of 5 PC's (C 4, C 3, MU 2, F 1, T 3) and several henchmen (F2, F1, F1, MU 1, Dog 1, Dog 0) managed to make it through, get the loot and not suffer any damage.  I think this is a testament to the sheer deviousness of the GM's own puzzles and traps and the healthy fear the PC's now have for anything and everything.  I should add that the dangers in the tower were apparently made more so based on the higher level of the party.

After the last disastrous foray into the Pits of Pahvelorn, the adventuring party sometimes known as 'The Order of Gavin" is depressed.  They are broke, have just lost one of their mages (The non-creepy one), had a a favored henchman descend into hysterics and dash unarmored off to his death, exhausted most of their magic items and honestly at wits end about where additional valuables might be located within the Pits.

A knock on the door of the party's ramshackle compound stirs the adventurers from their despondent sloth, and they find a short man, dressed in motley and bearing a invitation to the tower of a powerful wizard recently arrived in town presumably offering employment.  The tower is normal except for a pack of large apes placidly eating ferns in an enclosure to one side, and some strange geometry that appears to facilitate the sorcerer's interest in the heavens

Indeed the powerful wizard does want the adventurers to undertake a mission for him, specifically he claims that an ancient sorcerer of the name Calcidius 'the Great' shared an interest in observing the stars.  Clacidius is presumed dead, but he left an intact tower, likely full of high quality observation equipment that Zorpath's wizard is willing to pay 1,000GP for scouting a path to.  Beni negotiates a byzantine deal where the party will receive a 1,000GP each if they fail to find treasure, and the wizard has a contract drawn up by a strange white haired servant and the party prepares to depart.

The journey to the lost tower is easy, and only a bit more than a day thanks to the map provided the party.  Yet when the band approaches Calcidius's tower the actual process of entering and looting the edifice appears fraught with danger.  The tower is an 80' tall needle of white stone with a blue onion dome and in surprisingly good repair. Unfortunately its defenses also appear active as an ominous black cloud lurks above the tower with bolts of lightning crackling from it every few minutes.  The lightning seems mostly to strike a series of rods on the top of the tower and larger, 40' pillars.  Skirting the tower, the body soon spots a crumpled corpse within the burnt area and Beni dashes in to retrieve it.  The dead man is a relatively famous thief, whom Beni recognizes from descriptions, and has obviously fallen to his death from the tower.

rather than put off the inevitable, Beni dashes forward, up the tower's stairs and to its doors, where he discovers metal handles shaped like snakes and a heavy knocker.  Rather than touch the ominous door handles, Beni calls the rest of the party forward and all make it to the tower's relative safety.  No one else is willing to open the doors by hand, so Beni's rat flagged 10' pole is used.  Using the pole proves a wise decision as the metal door handle animates and strikes like a real serpent biting the pole.  When repeatedly tested the door snake doe snot run out of poison and continues to attack.  The party is excited by the prospect of a magical poisonous golem snake, but given the strength of the solid metal doors this excitement fades when the adventurers realize that the snake can't be removed.  The knocker is tested with a pole and when allowed to knock it causes the door to swing open with a hollow boom.

Inside the tower is a bland entry chamber, with simple chairs and tables.  The room appears far to clean to have been abandoned for several hundred years, so the party cautiously moves to a side door and finds a coat room.  The coats are worn, but not moldy (a testament to the designers - I always go for a cheap mold/spore/slime attack- I can't resist), so Ogam the Cunning Man digs through the pockets to find several GP and a blank scrap of paper.  The rest of the party investigates for secret doors, and finds none in either room, despite an obvious void behind the Eastern wall.

Pushing on, literally by using 10' poles to open the door, the adventurers discover a dining room with a pile of crates (paper mock ups hiding a trap door), a liquor cabinet (looted for wine), a statute of a Medusa (turned to face the wall while a mirror is held on it. and a stairway.  After minutes spent barricading the trap door and moving the statute the party heads up stairs to find a battered kitchen devoid of any interesting items and a couple of ruined servant's chambers wherein a key and a diary are discovered.  The diary tells of the tower's owner "Calcidius" going mad and becoming more and more dangerous as the servant prepared to flee.

The stairs going up are made ominous by a steady trickle of blood that drips for the key hole of the locked door atop them.  A careful check by Beni the Rat Catcher reveals no obvious traps on the door but that something blocks the keyhole.  Using an arrow and suspecting a trap Beni pushes whatever is in the hole out.  The object is revealed to be a key when it drops to the floor with a clatter.  Looking beneath the door, Beni can make out the key and attempts to cram various objects under the door to fetch it. Beni's sword is too thick to fit under the door, and dagger too short to reach.  While the party discussed what else might be used a frustrated Sarin the Cleric charges up the stairs and smashes the bleeding door.  Predictably the door responds with a trap - a gout of blood blasts Sarin and Beni, pressed to the side ready to follow the Cleric's charge with a poisoned arrow or two, and sends them tumbling.  Luckily they are unhurt and mange to stay on the stairs avoiding a nasty fall.  The door remains closed, and further attempts to force it are rejected by the party.  Eventually a trimmed down arrow shaft is able to extract the key and the door opens without further incident.

Beyond the bleeding door is a wizard's workshop and bedroom.  The rich furnishings are rotted, but more interestingly the room still holds a wizard.  Preserved and obviously trapped in a circle of magical salt he hails the party in a friendly manner and asks for deliverance.  When asked about payment he gets surly, when confronted with his servant's claims of insanity he gets outraged, and when asked for information about treasure he gets impotently violent.  The party plunders the room with the fuming wizard watching and takes a valuable crystal egg and several books on extra-planar magic.  Taunting the wizard the adventurers open the door in the back of the room and find a floating platform with a dial next to it.  A rat from Beni's sack is used to test the platform, and nothing happens to it.  The rodent suddenly elects to dash towards Calcidius, intent on disrupting the circle. Calcidius has obviously exerted his powers on the rat and is drawing it to himself.  Beni's reflexes and years of rat grabbing foil the wizard's plan and the rodent returns to the sack with a squeek of protest.

Using the elevator to descend all the way down, the party discovers a treasure chamber full of chests, presumably filled with coin and gems.  The chests are in a vault blocked by three fields of force, obviously controlled by four levers on the Southern wall. Tarvis the Daring Cleric and his Henchman Darullian (who is almost a PC) stay in the chamber and work the levers while the rest of the party retreats.  After almost bisecting himself and Darullian with additional force fields, Tarvis finally outwits the puzzle and the party drags all ten heavy chests through the wizard's chamber. Calcidius screams and rants as the adventures loot his vault, but the madman is ignored and further taunted.

Deciding that despite their treasure haul (thousands of gold pieces and tens of thousands of copper and silver coins), they have a duty to their employer, the party sets of to determine if the roof and astrological equipment are safe and intact.  Taking the elevator up to the top level finds the adventurers beneath a blue metal dome with a strange device, a fish pool and some storage bins.  The pool holds bizarre fish, but proves to be acid when Beni drops the disloyal rat into it. The machine is not investigated to keep it intact for the party's employer, but appears to be powered by coal and grey dust found in the storage bins.  Some of the dust is carefully extracted for later experimentation and a thick tome regarding alien fauna is removed from a stand, but the party leaves everything mostly untouched.

Taking a last look for treasures, the band descends to a basement (above the looted treasure vault) and finds a medical or necromantic laboratory the centerpiece of which is a human corpse with an autopsy scar stitched shut with gold sutures.  Feeling rich enough to ignore the obvious undead monster on the slab, the party grabs some other laboratory items, including a microscope and returns to the surface.

A last danger awaits the adventurers, transporting ten huge chests of coins across the lightning field in front of the tower.  Risk is assessed and the party loads up their backpacks, leaving the copper and dashing to safety without incident. The party returns to town with almost 10,000 Gold Pieces worth of treasure, and no losses, a truly successful adventure.

My thoughts on this adventure as a product are generally positive.  I haven't read the module, so I can't really speak to how much was the product and how much the GM (The GM's ability to keep playing the NPC trapped wizard with a straight face was admirable).  What I can say is that it's a lot of fun puzzle based play, and while the traps lack the mechanical nature I like, it makes sense that magical traps abound in a paranoid wizard's tower.  I am also sure that our party avoided a great many dangerous and deadly situations by being mostly cautious and lucky when we weren't.  I was also surprised by the lack of gross outs and the clues to/fairness of the traps (When a door handle to a wizard's tower looks like a snake, you've been warned if it bites you) given some of the  reviews I've heard regarding LOTFP modules and their 'survival horror' bent.  In general both my own Apollyon and Pahvelorn have at times been grosser and more horrific while Pahvelorn has certainly been deadlier and its puzzles more difficult.