From the Starboard side of the Promenade, Sterntown's premier shopping and temple district (off limits to sea washed flotsam, scavengers and such) and beyond huge reinforced bulkheads is the Fetid Pit, an air shaft that rises 700 feet to the grey light of the top deck, split by numerous fans that slowly rotate pulling down fresh air and scattering the faint light that leaks from above into maddening kaleidoscopic patterns.  The pit plunges down another 300 feet from the level of the promenade, presumably sealed where the lower submerged decks, the domain of the ash plague, begin.

The pit has long been a sewage dump, drain sump and disposal shaft for Sterntown which combined with even the weak light has made it a veritable jungle of fungus, lichen, mushrooms and other life.  Giant gas filled angler fish float in the pit glowing with bioluminescence, while long legged insects the size of a small dog scurry up and down the walls.  However, the pit is not a wholesome environment, it is a neglected and abandoned graveyard of Sterntown's unwanted refuse and like all such places aboard the Apollyon, the waste, and disregard felt towards the Fetid Pit has attracted or generated its share of Crawling Death and worse.


Recently a band of scavengers was allowed to descend into the pit and returned with the above map.  They claim that they descended via a chain lowered from the Steward's  defensive works at the pit's edge and discovered a pair of abandoned installations as well as a sturdy spiral stair that winds down towards the pits bottom.

Within one of these installations, a lichen encrusted bastion built out of the wall and straddling the stair the party encountered a suit of ornate black plate armor speckled and filled with paste like pink lichen, the very essence of crawling death.  The brave scavengers fought when perhaps they should have run, but in the end brought the vile thing down, discovering within the encysted remains of a Black Gang warrior, now corrupted by the nature of the Pit. 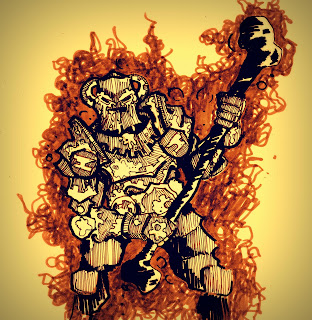 An Encysted Guardian is one of the more dangerous creatures created by abiogenesis in the abandoned and desecrated areas of the Apollyon's hull.

When the same living sludge that comprises most forms of Crawling Death finds its way onto the body of a recently dead sentient it rapidly devours and replaces the flesh, creating a skeleton encysted within a sheath of pink ooze.  The strength of the hybrid entity created by this unnatural symbiosis is directly proportional to the strength of the creature whose bones form the Guardian's core.  As such the most dangerous of these creatures are those that have subsumed the bones of great warriors or large monsters.  In many cases the Encysted Guardian will be trapped within and animating the armor of a fallen warrior, leading to the creature to appear as an animated suit of armor rotted and splotched with distinctive blooms of pink lichen like slime, and oozing more of the same slime from any injuries it sustains.

Encysted Guardians move unnaturally fast, and gain +1 to their initiative rolls, flowing to attack in a jerky hypnotic manner.  They will attack with any weapons they happen to hold (usually rotted and decayed, but themselves strengthened by the crawling death fungus infesting them) and/or with whip like extrusions that strike for 1D6 points of damage.
Posted by Gus L at 7:02 AM