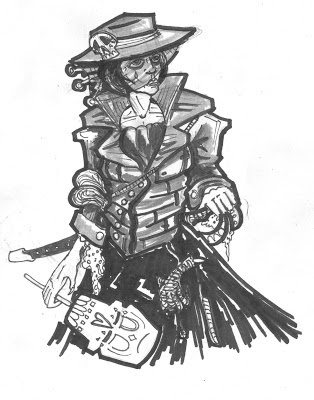 *On Backstab attack damage is X4 and to hit chance is +4 (unless played by the rules - in which case it's X6/+6hit, without stat and item bonuses).

Millicent cobweb first came to Wampus county as a 19 year old mail order bride, which proved a vast improvement over being an orphan loom worker.  Her new husband was a young frontier farmer named Ennis Cob, carving a piece of land to call his own outside of Thistlemarch.  The couple had ten good months together before Ennis died suddenly.  No savage attack, witch's curse or strange beast did Ennis in - he simply got himself kicked in the head while checking his horse's hoof.  Millicent did not swear revenge, she grieved instead, deeply and long, contemplating death's random suddenness and going a bit mad.

It was in this state that Millicent Cob met the Necronaut Cult led by the dandy ghost Phineas Gristle.  The death cult proved a perfect place for Millicent Cob and its lunatic dogma a perfect fit for her own morbid reverie.  Millicent changed her name to Cobweb and began to wear the skull-face makeup of a Necronaut corpse bride, but again her happiness would be destroyed.  A band of tomb looters burst into the cult's inner sanctum and in a quick battle used magic and gunfire to decimate her sisters and drop her into deep sleep, disrupting the worship at the Necronaut's huge amber altar.  Cobweb was kidnapped and sorcery used to make her amiable to her captors, who interrogated her and then set her free to wander Thistlemarch while they annihilated the cult, with the exception of Phineas Gristle, who fled without raising a ghostly hand to defend his followers.  Cobweb swore murderous revenge on the ghost, who she came to believe had corrupted the true peaceful and solacing equality of death worship with his desire for worldly power.

Cobweb, without means to support herself worked as a waitress at the Thistlemarch Hotel, but soon found that her skills with gun and knife, learned during her childhood and with the Necronauts, were a more valuable commodity than her ability to sling grits and eggs with a smile.  She found work with the very wizard who had once thrown her into unnatural slumber and allowed her to be kidnapped, a Chauncy Woolstrike.  Cobweb doesn't hold grudges, she nurtures them, but she figured she owed Woolstrike and his companions, "The Rat House Bastards", a debt for freeing her from the delusions of the false Necronauts.  Adventuring to Crumbledown, Cobweb almost died from the ritual dagger of a Devil Fairy midget giant, but was saved by the reverend Ornibus Jones - an experience that has brought her closer to death and given her an appreciation for the snake god Sethet - even if he will only ever be a subservient deity to Kindly Lady Death...

Adventuring  agrees with Cobweb, and when her employer was whisked away to a strange prison dimension by a magical deck of cards, Cobweb stepped up and filled his shoes among the Rat House Bastards, and considers herself a full member of the adventuring fellowship. She is set aside from the rest of the band however, Cobweb is a bit insane and very murderous.  She often calls herself a pyschopomp to the unready, and sees it as a holy duty to dispatch the unhappy the riotous and the combative into the waiting still arms of death.  Outwardly there is little sign that Millicent has become a fanatical assassin, she appears as she always did, a tall, a lean faced woman of 22, with broad shoulders and enormous calloused hands.

Millicent has sworn to only wear clothing and equipment "the colors of the grave" as a sign of devotion to her (possibly unreal) deity and so wears, black, ash gray, bone white and a deep purple she calls "corpse mold". Cobweb wears a long black dress and petticoats in a rather demure or dowdy style under an armored leather coat (she has armor under the dress as well) while sporting a veiled funeral hat. When in the street she can easily be recognized by this sombre garb but more often by her strange affectation of carrying a white leather mask of a skull that mirrors the makeup she wore when she was part of the cult.  In battle Cobweb's preferred method is to lay in wait or sneak behind enemies and then leap on them with her saber to lethal effect.  If confronted directly she will first fire off both double barreled shotguns she carries in a specially constructed sling before drawing her saber and kukri.

With Chauncy rescued Cobweb is currently growing estranged from the Rat House Bastard, having amassed considerable money (both her own and from stealing Chauncy's hoard when he was imprisoned).  She seeks to revive the Necronaut cult, but in her own image - as paid mourners fisrt and murderous assassins for hire second.  Despite her strange goals Cobweb remains fond of most of the Bastards, especially Ornibus who saved her life, Abel Killejoy (Who's clumsy pretend fits of terror she finds charming) and Chauncy, who cobweb feels a strange sisterly affection towards - likely because of his class origins and obvious magically enhanced insanity.

Cobweb is a strange character - she'd be Lawful Evil in most games, seeking to increase her own power, revive death cults and murder on a regular basis.  Yet she's neither cruel nor disloyal and has been a useful ally to the Rat House.  I have no idea how Cobweb's fate will unfold - but I suspect she's going to be around a while as she's become positively deadly
Posted by Gus L at 9:25 AM