Snakemen are something I keep mentioning in my Certopsian Plains stuff, and Serpent Men make up the ultimate opponent in the Certopsian Situation (which I am trying to get back to working on).  Below is a bit of background, a picture (the composition, idea, and style of which was ripped off wholesale from Moebius) and a basic stat-line. 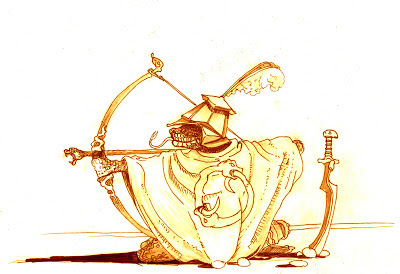 Awakened by strange ritual and dark magics, the Serpent Men have returned to the Certopsian plains after two thousand years of slumber.  Once the blood soaked masters of the Land of Thousand Towers, their monstrous 500 year reign was only put to the end by the advance of the Clockwork Matriarchy and it's automaton armies.


Recently the Snakemen are stirring in from their dusty tombs, ancient clutches of eggs hatching legions of serpentine soldiers forming for conquest. The Serpent Men have already brought the human nomads of the Lower Certopsian to thier cause.  Only a few of the most depraved Insect Men tribes will have anything to do with them luckily, as the memories of the hive sentinels are long and remember when Snake Men armies hunted and goaded their tribes across the Lanthanide Wastes.

Still, several hundred snakemen soldiers and ten thousand dinosaur riding nomads are a dangerous foe for Denethix's ambitions in the Certopsian and have poured North.  The nomad irregular cavalry, fast and cruel, have proven a match for the rancher militias and poorly equipped local garrisons within the Certopsian, while the snakemen's elite forces of horribly mutated human troops and dinosaur war machines have proven unstoppable to local forces.  The weak half co-opted Wizards of the borders have fled before the uncoiling snakeman behemoth, or died in their towers under a rain of poisoned arrows, tentacle bombs and sickly green balefire and now Junction Town has fallen.  Refugees crowd North and West back to Denethix's heartland as battalions of newly conscripted Unyielding Fist soldiers, mercenaries and heavy Steel Leviathans push South to meet the Serpentine threat.

The average snakeman is a soldier of some skill, hatched from a clutch of eggs marked for warfare, these hissing sadists are well trained, disciplined and loyal to higher ranking Snakemen and the ultimate Snakeman goal of restablishing the Serpentine Dominion from the Feasting Trees to the Sea. Snakeman are agile and enormously strong, with the equivalent of a 16 Strength and 16 Dexterity (gaining +2 to hit bonuses in melee and ranged as well as +2 damage and -2 AC). Snakemen Soldiers are generally armed with a bronze helmet, sickle shaped sword (1D8)+poison, elaborately decorated bronze disc mail (AC 5), and either a shield, polearm (mancatchers or partisans) or compound bow. If caught unarmed they may grapple with their considerable strength and bite with their venomous fangs for 1D4 points of damage and 3D6 poison damage (save for no damage).  Sankemen also universally envenom their weapons, so that all arrow strikes and the first strike of any melee weapon will poison for 3d6 extra points of damage unless a save is made.

While Snakeen are an advanced race, they eschew technology and instead use magic for most tasks.  Much of their power comes as boons from thier eldritch masters, the great tentacled horrors from beyond the stars, and they invoke the corrupting and transformative powers of the great old ones to improve the martial abilities of their nomad allies and war dinosaurs.
While the stats above are for a basic snakeman soldier, snakemen also have higher level leaders and specialists, including sorcerer priests (can cast from magic user and reversed cleric spell lists), assassins and snipers who wield magically enhanced weapons (such as living snake arrows) and deadly poisons.
Posted by Gus L at 7:33 AM