Actually it's four small maps I drew up mostly as a series of tests for new map fills. 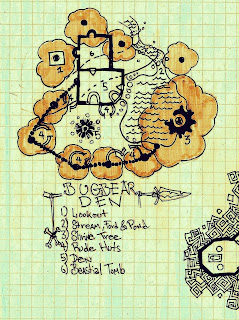 (This map relates to ASE goblins - with their strange alien physiology)

In the forest beyond the low road an enterprising band of goblins, led by a fairly intelligent servitor species goblin (though they have no hive mind) have set up a small defensible village using an ancient bunker as a base.  Using this base they've been successful raiders and scavengers.  The key to their success is the use of a huge hollow tree as a spawning shrine for selected goblin sacks that are then heaped with the bodies of victims and animals the goblins hunt.  As goblin specialists know, rich nutrients and forest air result in bugbears.  Now the tribe has several, and with this added muscle expect to raise an even larger crop of bugbears soon.

Not really a fill map, given it's outdoors - I do like the use of the 20% grey (well now orange) for the trees and think it's a nice way to frame a map when one doesn't have real walls. 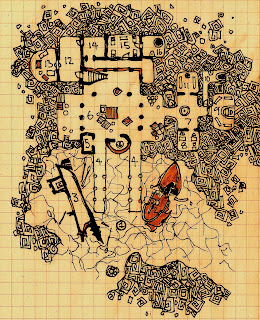 The desert beneath the earth was once a salty underground sea, or what was once a sea is now dry an sunk beneath the earth.  Once a proud trading house the Bleached Harbor is now derelict, with the ruins of a smashed cog and a capsized war galley standing sentry below docks that now raise 15' from hard packed salt flats.  Inside the ruin, carved from the rock of a former sea cliff, its interior walls enriched with fossils the trading house is strangely undisturbed.  Perhaps it's ghosts, ghouls or demons.  Certainly denizens of the salt flats find the shelter of the trading post a welcome respite from the dry scouring winds outside.

Used a hatching technique consisting of spirals - Not sure how I feel about it, it's not slow but it's not especially fast either.  I think the effect is pretty good, but it doesn't fit well in narrow spaces. 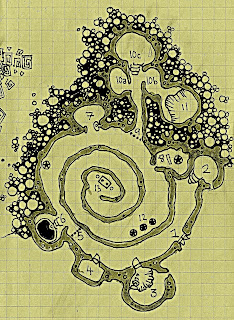 Like a cancerous boil on the face of the mountain the spiral has a slick organic look, though no one alive today remembers it growing. It is home to monstrous cultists, deformed and themselves covered in boils who prey on the weak to sacrifice to their terrible godling.  The godling, a giant, deformed and warped, that may once have been human roams the spiral hunting anyone without his mark who enters.  Beyond a protective grate the cult's high priest sits on a throne of bones and slime surrounded by a harem of insane captives and his mutated band of cultist followers.

Hatching here was pretty successful, admittedly its a really slow technique, and it's not useful for everything. 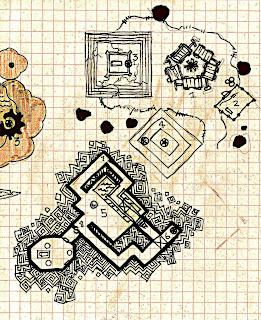 MAP 4 - Ziggurats of he Serpent Hierophant

The sands of the Certopsian hold many secrets, including the tombs of several lost races and empires.  Recently the nomads of the plain have been waging organized and aggressive war to reach certain ruins, such as these ziggurats.  A nomad war-party is encamped here, within a defensible ring of wagons acting as an escort for their leader, a man-serpent priest who seeks to use the inscriptions on the ziggurats to safely enter the trapped tomb of an ancient serpent man hierophant entombed with mystical knowledge that will allow the priest to raise a pack of undead serpent men and provide aid to the nomad war effort.

The same hatching pattern as map one, but a bit more stylized.  I like this one better for the subject matter and it feels cleaner than the spirals alone.  I also really like what the filters I used on it did.