Recently there's been some fun had redrawing a map posted by Will Wheaton on his blog. So far Dyson Logos has done a quick sketch of the "Wheeton Dungeon" as has Matt Jackson at Lapsus Calumni (whose excellent maps I've just discovered).

Since I couldn't think of anything to map lately I did my own version of the map - as some kind of slimy fish deity temple where the horrible cult god, all scales, spine and giant sightless eyes comes slithering up a ramp to greet/eat its followers.  This arrangement was suggested purely by the layout.  I've fiddled with things a bit placement wise - making corridors shorter mostly.  Also used a variant fill - a spiral hatching that I've been trying to get right. 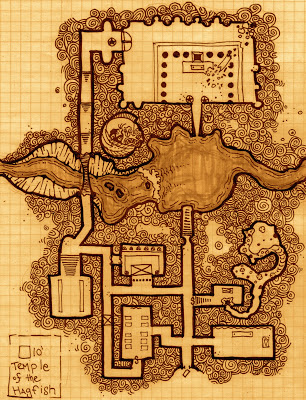