FALLEN EMPIRE
ON THE PATH TO ADVENTURE

PDF OF WITH LISTS HERE

The Fallen Empire is a place where the lives of the citizenry are constant hostage to contingency.  No day goes by without rapacious tax assessors turning a village into desolation ready for sale to outside interests, a sink beast surging up and invading a nearby croft, or that the simmering conflict between two ancient houses is finally settled in a bacchanal of slaughter.  The survivors of these tragedies, insignificant to the callous and exhausted powers of the world, find themselves without sustenance, support or succor in a time where the oppression of time and the past means that even compassion has guttered down to the barest coals.  Some die. Most suffer and then die.  A few survive, and the rarest prosper.

Those individuals that are able to withstand the buffets of ill fortune mostly become treasure hunters, grave robbers, and mercenary agents.  Guides, wildmen, spies, travelers, chroniclers, prophets and reavers - adventures, starting from nothing these men and women shift and bully the Empire’s somnolent powers, dusty mores and resigned masses, carving themselves places of note. 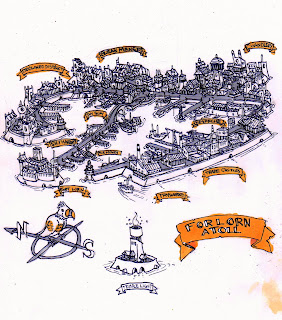 Before riding a wave of blood, magic, fire and cunning to wealth and power all adventurers were something else – usually something contemptible and piteous.  To start an adventurer on their path to death or glory roll 3D6 once for each of the following stats: Strength, Intelligence, Wisdom, Dexterity, Constitution and Charisma.  If the score is 5 or under the adventurer has a -1 in that statistic, fifteen of over it’s a +1.  Strength grants a bonus or penalty to melee damage and to hit. Intelligence a +1 or -1 to initiative, Wisdom to Saving Throws, Dexterity to Armor Class, Constitution to Hit Points on a per die basis, and

Equipment in the PDF below  is defined by the region and past of the adventurer, with  several potential tables to determine starting equipment and past for adventurers in the regions around the Desolation of Zubrab – The Pyre Sea, The Pyre Coast, Provence Maritime, and Green Hive Canton.