WONDER & WICKEDNESS?
So Brendan of Necropraxis has released a product into the OSR o’verese, and this makes me very happy.  I can’t say this is a completely non-biased review, as I have great fondness for Brendan as a creator of game content, have played in many of his games and plunder his ideas with Mongol like ferocity and persistence.  All that said I am not always a fan of every rule change Brendan proposes and his relentless drive to pare everything down to its minimal mechanical elements (I suspect the man may dream in game mechanics) doesn’t always gladden my drunken baroque heart, so I feel I can pass judgment on Wonder & Wickedness as it is deserved in this review.  I paid full price for the product (as I tend to do), so it’s not as if my ethics have been suborned by the offer of free game product (could they be?  I really doubt it).

WHAT IS IT?
Wonder & Wickedness is effectively a modular "bolt on" spell system for your older style fantasy roleplaying game, composed of unleveled spell lists and an efficient minimalist approach to gaming magic that emphasizes the fictional idea of magic as inherent creepiness, chaos and corruption while trying to use the most elegant and simple rules possible.  It’s some spell lists, a magic system, magic items and an ethos.  Wonder & Wickedness would likely work best for a game based around OD&D power levels and mechanics, but is not exclusive to any system.  The book is also worth reading for other fantasy games, because mechanically it’s simple and evocative, meaning those who prefer more mechanically complex systems may have to adapt it, but they won’t find anything that is tied to another system and will find plenty of good ideas about running magic as a scary, powerful art with a distinct undertone of mystical foulness.
CONTINUED >>>
Posted by Gus L at 5:08 PM 4 comments:

The practice of Alchemy is at once one of both the most practical and the most mystical of the schools of magic.  A rigorous academic study Alchemy seeks to transform and modify the objects and elements of the everyday world (as opposed to controlling, binding and allying with their essences – the goal of elementalism)  for the benefit of the Alchemist’s individual body and soul as well as the creation of the “Magnum Opus”, a great work, most often an artifact of great power: The philosopher’s stone, offering eternal life, the universal solvent, capable of dissolving the bonds of magic and reality or Azoth, a universal medicine capable of raising the dead and curing any ailment.

Beside their contributions to the great work, Alchemists practice a form of magic less dependent on syphoning power directly from ley-lines or their own will and capable of using less power to gain similar effects by magically altering everyday objects.  Where an elementalist would bind a fragment of fire to an enemy causing him to burst into flame, and an thaumaturge lash out with a hard won tendril of pure unreality as a weapon, an alchemist will fling a specially enchanted dagger or sling bullet that seeks out and strikes the target (perhaps triggering some sort of chemical combustion reaction on impact).  As a result of the importance of mundane items in their work, Alchemists have many useful skills related to machinery, poisons and technology.  The Alchemist’s practicality is often lampooned by other magic PR actioners, and the caricature of an Alchemist, crushed under the burdens of his tinker’s tools, engineer’s kit, chemist’s glasses and disorganized research notes is a stock one amongst the schools of academic magic, mocking those with lesser talent for wielding raw power  but perhaps greater adaptability and genius.  It is a rare group of scavengers that doesn’t prize an Alchemist’s presence as his magic is no less effective for being tied to mundane objects and his broad knowledge of the sciences is often proves more helpful at avoiding danger then the puissance of a more focused sorcerer.

The Haunted Dungeon - a series of tables


IN THE SHADOWS   OF   THE   DEAD
Sarin the Mambo immediately knew something was wrong as the familiar hatch swung open. The pair of Shrine Fanatics, their unarmored bodies covered in devotional tattoos of ancient mechanical schematics - meanings lost, but the ancient clean lines still a lure to protective spirits of the vessel - could even sense something uncanny.  The two men, emboldened by the priestess' presence, cranked away at the hatch’s manual override wheel, but their loud chanting of the 537th sutra to the Prime Engine shrank to a whisper. Beyond the hatch, the formerly domesticated companionway leading to a slaughterhouse and several large, elementally powered meat freezers was wreathed in fog, fog and utter wrongness.  Sarin’s various fetishes of the Winding Gear, her patron, felt as if they were vibrating atop her armor and her frail elderly hand tightened involuntarily on the cord that held the heavy mace to her gauntlet.

Sarin didn’t even need to borrow the eyes of the Winding Gear spirit that “rode” her and filled her with its power to see that there was foul magic beyond the hatch.  It was as if death, hate and sorrow were pushing out from the peeling wall papers of the companionway beyond, weeping from around every bent rivet in the companionway walls beneath, and dripping like curdled oil from the ceiling.  The fog was the worst of it, light from the lanterns held by the Mambo’s companions would not penetrate more than a few feet into the shifting miasma whose swirls and eddies gave an impression of intentional, malicious movement.

The slaughterhouse had gone bad, and those who had died within had not merely risen as common revenants or individual spirits, but instead corrupted the whole of the region, the fear and horrors of their deaths leaking into the walls and fixtures of the slaughterhouse to turn the entire area into an expression of hate, fear and a deep abiding sense of betrayal that sought with inchoate fury to punish the living for its multitude of deaths.
CONTINUED >>>
Posted by Gus L at 11:44 PM 5 comments:

A List of unique starting magical items for noble characters in my (admittedly underdeveloped) Fallen Empire setting.  Alternatively I suppose these are the minor items one finds in the crumbled ruins of decadent high-magic mansion, where thousands of years of ease and glory have given way to rot and rodents. 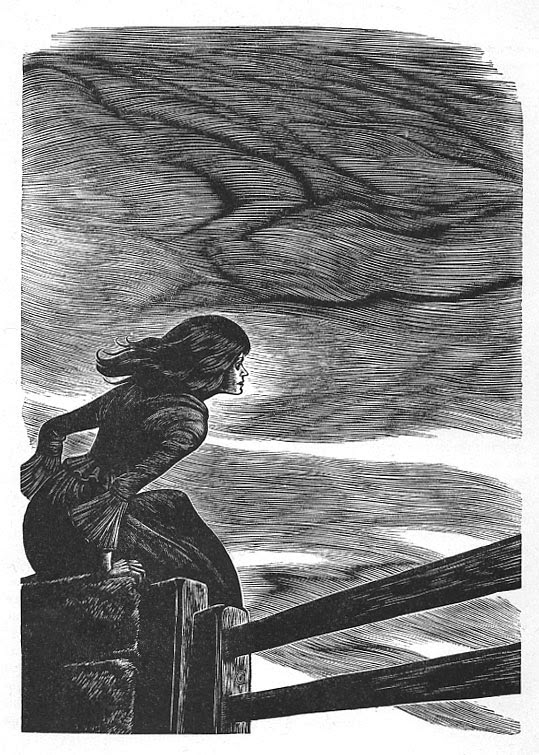 Your house has fallen, not once, not even twice, but like a tottering drunk, tumbling endlessly, colliding with fixed obstacles, cowering from imagined enemies and unprepared to face tomorrow.  Why do you alone see it? Your elders, the family head, the old retainers, the children, and even your peers are blind, wrapped up in false glories and an imagined past. While they sit in dark worm eaten parlors, clutching the greasy and threadbare arms of their patched tapestried thrones and waiting for the Empire’s return to fortune, you have calmly laid out the need for change.  Over meals of what were once decorative carp but are now your rubbery repast carved up on golden plates, you have shouted and raved for action.  In the mossy dripping blackness of the overgrown topiary garden you’ve intrigued and schemed.

Your efforts have come to naught, your warnings, your rumor mongering, your pleas and prayers cannot move the fixed inertia of a Millennium's propriety and tradition.  Now there is only flight, clutching poorly prepared supplies and rushing for the unknown world beyond the mansions and spires.

Note the illustration are from a 1940's edition of Wuthering Heights (If the swarthy gentleman digging up a grave marked Catherine didn't clue you in.)