Inspired largely by this post at Rotten Pulp, and by a nice big hangover binge on Calvino, I've prepared this handy table.  Useful perhaps for when people ask scholars or oracles how the game world came to be a sublime ruin teetering toward the aesthetic of grotesque.  Of course you might find it useful for other reasons as well - for example I'm keeping it open on my phone to help talk to relatives at Thanksgiving. 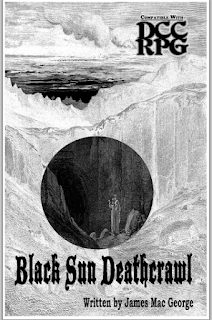 OMINOUS STATEMENTS AS SETTING“And yet the Cursed dig...because they have forgotten what it means to do anything but dig, fight and flee.”That’s typical of the somewhat lyrical, somewhat overwrought declarations that MacGeorge  uses as the main setting vehicle.  Even setting rules (all players begin as a level 1 warrior) are communicated in this way, and it makes for an effective enough system to communicate setting and feel.  It’s rather evocative really, and allows justifies Deathcrawl’s interesting rules changes (Death occurs by burning up a character’s ‘hope’ - formerly Luck in the DCC rules and by the steady accumulation of terrible mutations).  More than anything Blacksun DeathCrawl feels bleak and allegorical, a mystery play from some religion based on Black Metal Album covers rather than normal tabletop fantasy or the series of evocative vignettes that the module sets out to promote ‘moral’ play (in the sense that more of the play derives from making moral decisions, not that it forces players into having a specific moral stance).  Yet I suspect it’s best played as a dungeon crawl where finding a way deeper to escape the Black Sun’s torturous light and unstoppable minions while discovering food and water are the only goals.
CONTINUED >>>
Posted by Gus L at 3:06 PM 6 comments: