In the City at night

It takes two days of canal travel from the Eastern and Western canal to reach the Docklands after one has passed through the shadowy enormity of the Capital's great walls and the mercenary militia and trade towns that cluster about the gates.  Two days of distant spires, and endless vistas of ruin as the bargemen pole furiously up the green canals - past fishing rafts, and under the black snapping flags above the dens of feral thralls.  Through expanses of arcane lilies that project the ghostly images of ancient beauties from their blooms, and over the fish gnawed bones of thousands of years worth of suicides and murder victims.


The Capital sprawls at the confluence of two great rivers, bound and channeled within the great circuit of it's two hundred foot, bonewhite walls and emerging again as canals that lead outward, rays from a dying sun.  For even though the Capital is dying, the spires of the Imperial Presence still gleam in the sun with its ancient shadow stretched out to cover entire blocks and neighborhoods of insula.  Within however is only a wilderness of dust and great polities of vermin, the street a mazed jungle of imperfection and abandoned buildings.   Imperial tower blocks stand in indestructible bonewhite and magically extruded stone, but the less permanent materials of their interiors are rotted and burnt away to leave only regal shells for the pigeons to roost beneath.

Urban Life is limited to to the North Eastern Quadrant of the Capital, around the foreign quays and the outlanders market where the men of the Resurgent Kingdoms gather to trade the salvaged wealth and mysteries of empire for the earthly dross of grain, dried meat and clean wine. Only here are the canals clean of unnatural life, and the night streets safe from haints, ghouls, blackhearts, and ferals.  Magical sinks cover much of the Capital's Southern half, the once towering factor hives collapsed into themselves, teaming with feral thralls and worse - the roaming sports of curdled magic: parliaments of owlbears, cockatrice, hollow men and even the rumored demon.


Within the civilized Northern half of the capital the dockyards form a new and growing metropolis of Resurgent adventurers rebuilding from rubble as locust like they plunder the Capital's ancient glories or trade them for necessities and cheap intoxicants. Swaggering mercenary guards, white haired men and women of the Pine Hells, or wilder places that once were the Empire, provide rough security to those who can pay and it is not uncommon to find such oddities as a pair grey skinned, lamp eyed Ibian wrestlers, guarding a hook handed corsair captain from the Southern Isles or a merchant caste family protected entirely by amazons from across the mud sea clad in the corroded golden plates worked from the shells of ancient automatons.

Beyond the dockyards are the mansions of the trade and craft caste families, both afraid of the ways the Resurgent newcomers ignore the all consuming Imperial system of courtesy and caste, using violence as a negotiation tactic, and intrigued the Resurgent appetites for Imperial craft, salvage and trade. Even with the new trade most of the craft and merchant families ape the manners of the nobility and remain immured by custom within their mansions, or possibly extinct - a few bones in the high rooms of a darkened and moldering house.  Here and there though there are signs of growth and life, with gardens that are more then overgrown tangles of magically augmented plants, and windows that glow with light in the darkness.

Surrounding the Palace Spire itself are the Spires of the nobility, a world of their own, still inhabited by the degenerate and decadent remainders of the caste and their servitors.  Many towers are empty, but a salvager can never tell if somewhere within a hundred stories of crumbling opulence a great magus noble remains, surrounded by her pack of dedicated servitors and ready to protect her inherited mountains of rotting finery with fel sendings or life draining sorcery.

To wander the streets of the Captial is too witness broken wonders built on a scale larger then human ambition and abandoned because their care is beyond human ability.  It is to age and decline in every crack and worn stone block and to know that humanity's best days are behind it, to feel one's own insignificance, overshadowed by the past.

THE ALTERED DREAMS OF REGIMUND CRUFT 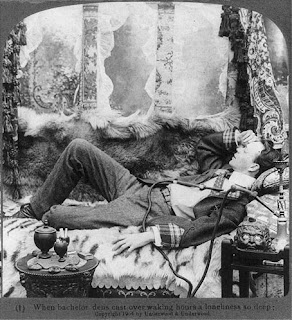 Reginald Cruft, my player character in Ben L’s Dreamlands game is a 19th century American veteran of Union side of the US Civil War, and by 1885 a 47 year old failed medical student and raving drug addict.  In his delirious and debauched state he has dreams, and these dreams have recently been very consistent - they have been of the Dreamlands. In the Dreamlands Cruft is a wizard, capable of some minor feats of charm and mesmerism (though at second level he has the spells “Charm Person, Sleep and Enlrage/Reduce - the last being hard for him to justify as mere mesmerism).

Below is a table for the effects of the various overdoses that push Cruft into the Dreamlands and how they change him during his travels there.  Presumably when Cruft dies in the Dreamlands, his body, wracked with overdose, will be found in his filthy New York garret or a dingy go down opium den.
Posted by Gus L at 12:29 PM 2 comments: