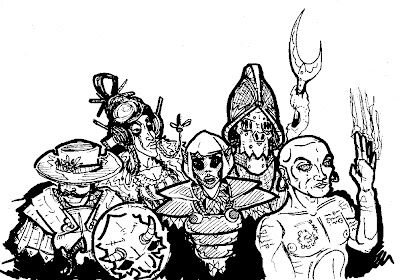 This page aggregates my home Campaign, played in my apartment around a table.  The player are a group of five professionals in their late 20's and early 30's in a major metropolitan area of the US.  None us had played any pen and paper games since the mid 90's.  We play approximately twice a month, usually Sunday nights using the Labyrinth Lord and Labyrinth Lord Companion rulesets.

Characters Currently in the Campaign are as Follows:

SESSION I
A bond is formed amongst the characters when they are faced with the common Thousand City's indignity of being compelled to participate in a mystic ritual.
SESSION II
In which a newly outfitted band deals with demi-human feelings of inferiority and learns what a Moktar is.
SESSION III
In which  our protagonists discover that goblins have unpleasant in-laws and that the wages of science are largely intellectual.
SESSION IV
Tragedy, Strum und Drang! Wherein the harsh lesson that ancient robots are not friendly is learned
SESSION V
New recruits bring down the party's level of morality, much alcohol is consumed and the band shows Bodmew the Gross that "Crime Doesn't Pay".
SESSION VI
Unwholesome religious truths are learned and pests destroyed.
SESSION VII
Nell reveals other talents besides murder and the list of things waiting for the adventurers in hell grows dramatically.
SESSION VIII
The Obelisk is cleansed! Huxley battles through curse and sorrow to slay and treasures are unearthed.
SESSION VIII - addendum
The Priest of Jackal Mask, Grimgrim resists temptation, wealth is squandered on firearms and fancy silver chased armor.
SESSION IX, PART I
Back in town - a posh interlude, feline muscle is hired with and an abrupt descent into low life ensues.
SESSION IX, PART II
Depravity revealed, a drink with poverty, mighty illusions and a desperate leap to safety.
SESSION X
An ascent, an assassination and an abduction.  A dangerous patron reveals himself.
SESSION XI, PART I
A charge, a revelation and representation.
SESSION XI, PART II
A return to the brewery, wherein the Adventurers learn the finer points of grunkie baiting and develop a strong dislike for halflings
SESSION XII
The law makes an offer and  robotic menaces are greatly over estimated.
SESSION XIII
The mythic underworld coughs up its secrets, they reek.
SESSION XIV
Trail and Punishment
SESSION XV
Sentenced to the frontlines & the dawn patrol
SESSION XVI
A chance for legerdemain, supply problems and the desert dash
SESSION XVII
Battle of the Pleasure Dome
SESSION XVIII
Twisted Pleasures of the Idyll classes and "How heavy is Gold!"
A Note on retirement...