Monsters and Treasure, volume 2 of three booklets, the 1970's box set version of Dungeon & Dragon's "Monster Manual" moves on from men directly into humanoids.  There are five normal sized humanoids, and most get only a line or two of text. They are also statistically uninteresting, lacking even the armor and weapon variety of human enemies and having no real flavor beyond a progression through four classes of enemy with incrementally improving AC, HP and Attack.  As much as battling orcs and goblins is a mainstay of tabletop gaming, and the mainstream of the heroic fantasy, these creatures are totally uninteresting as presented in Monsters and Treasure.  Perhaps they are a blank template to project one's own monstrous expectations upon, but here the difference between a kobold and a goblin is a single point of AC and a hit point or two.

Orcs, which have a very long entry and which I've discussed previously, are an exception, but otherwise these humanoid descriptions are quite devoid of interesting information.  Kobolds have only a name and some mechanical details, while the entire goblin entry is:

GOBLINS: These small monsters are described in CHAINMAIL. They see well in darkness or dim light, but when they are subjected to full daylight they subtract -1 from their attack and morale dice.  They attack dwarves on sight. Their Hit Dice must always equal at least one pip.

Composition of Force: When in their lair the "goblin king" will be found. He will fight as a Hobgoblin in all respects. He will be surrounded by a body of from 5-30 (roll five six-sided dice) guards as Hobgoblins also.

They're small monsters that don't like the light, that's about it. 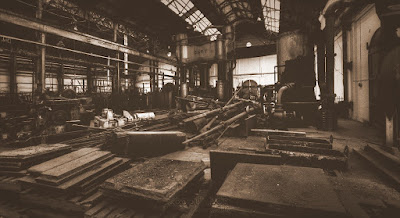 Below are smaller play reports from the last several sessions of the HMS Apollyon game, mostly concerned with the party's efforts to explore and loot an ancient industrial node on the Port side of the vessel.  It's always nice to open up a new area, and this one is basically just a dungeon crawl with minimal relation to any overarching setting concerns.

A huge hatch blocks the way Port from the vault beyond the Rust Gate, the vault where far too many lives were recently lost in both infighting between Sterntown’s factions and the battle against the War Dead Minions of the still unaccounted for “Brown Surgeon”.  The area presents a great deal of resources for whatever faction controls in, and currently the undisciplined bands of the Scavenger’s Union lounge about, still ebullient from the the success of their double cross and mass murder of Thief Taker and Bevard Family forces.  Only time will tell if the Union can hold the vault (also known as “The Buried Vault”, “The New Lands” and “The Mushroom Farm”) or the hamlet in the vault beyond.  Currently the area bustles with scavenger activity as riotous drunken bands strip the former undead stronghold in the hamlet down to its deck plating, carting out huge loads of useful items and a wealth in decorative stone.

The hatch leading Port is an unknown, opening and closing on some strange schedule known only to the ship itself, it is a giant wheel of 4’ thick orichalcum, designed to stop flooding and locking into place with massive hydraulic driven bars.  The hatch has remained unlatched for several month however and was opened briefly a year or more before by a band of scavengers who reported the area beyond was some sort of storehouse or forge.  Deeming the chance of the hatch sealing again to be small, the band of scavengers once called “The Black Cloaks” seeks to explore the area beyond, expecting it to be full of plunder and rich in industrial supplies.

With a laudable caution the scavenger gang moves beyond the great hatch and discovers only a small bare room, a few smashed crates, shredded bit of thin metal, scattered about and a large peeling mural of some sort of wrench carrying and hardhat wearing rodent painted on the Port wall.  Close examination and light dusting reveals that the mural welcomes the scavengers to “Port 5S Supply and Fabrication”.  Sternward from the entrance room is a great multi level chamber that stinks of coal and smoke.  A massive forge stands at its center, and a cautious, candle aided exploration reveals hulking industrial machines, lathes, cannon molds and workbenches fill the space.  The forge at the center still glows, but the room is simply too big and too strange to investigate thoroughly and the scavengers decide to retreat and open the door leading fore from the entrance.

As the door creaks open to reveal a narrow hallway the party is startled to meet a band of four spear and crossbow armed flying monkeys.  The magically transformed simians are clad in red rags instead of uniforms and wear poorly enameled brass buttons and copper electrical wire as decoration.  Almost immediately the monkeys start to demand money and threaten the scavengers and combat quickly commences.  Soon only once monkey survives and he is captured, but the fight has drawn additional flying monkey reinforcements and a true battle begins to rage, with the monkey flank attack blocked by a prophetic use of hold portal and several waves of crossbow and spear armed simians knocked unconscious by magic.  The monkeys pepper the scavengers with bolts and bombard them with firebombs until a new threat emerges – a hulking monkey in a welding mask carrying a flame thrower. The scavengers, out of sleep spells, target this new danger with a variety of weapons, but it is Price’s use a fire magic that saves the day, causing the monkey’s flame weapon to explode.  The detonation kills most of the monkey front line and scorches the scavengers as well, but in the rain of flaming debris and seared fur the battle ends with the surrender of several monkeys.  A truce is worked out between scavenger and monkey allowing the party to explore any area not marked with a red flame symbol and exchanging peace for information about the dangerous “clawed ones” to the Fore, God of Fire aft, and Haunted Offices Port.
CONTINUED >>>
Posted by Gus L at 1:13 PM 6 comments:

Random Appearence and Clothing for HMS Apollyon Characters and NPCs

Below is a table of random clothing and affectations that players wishing to add a little mystery, back-story or description to their new HMS Apollyon characters might roll on.  It's pretty much only for humans of the scavenger class.  Passengers are always in battered suits, Flying Monkeys in uniforms or livery, Froglings often in the traditional harnesses and leggings of their moiety.  The less said about Merrowman fashion the better.

Anyhow hopefully this will provide some of my players amusement.


Vornhiem is almost universally acknowledged as a great city supplement, and it is, but the new city supplement from Hydra Press, Fever Dreaming Marilinko, set in Chris Kutalik’s Hill Cantons (what the Grand Duchy of Karameikos should have been) is an entirely different kind of great city supplement.  Where Vornheim, and the old Judge’s Guild city supplements, aspire to offer means of creating ‘a’ fantasy city, Marlinko seeks only to create ‘the’ city of Marlinko, and does so in the form of a set of adventures, personalities and factional rivalries that create a city ready for conflict and picaresque shenanigans.

In some superficial way Fever Dreaming Marlinko resembles the classic B-Series Module “The Veiled Society”, in that it presents a series of small urban adventures focused around the factions within an urban environment.  Marlinko is far better than Veiled Society in that it is not overly proud of its cleverness (nor does it’s cleverness consist of gimmicky cut-out buildings), and it takes the time to make a city that isn’t simply a dull pastiche of fantasy cities.  Marlinko does follow Veiled Society’s lead in making the city a place for adventure far more than it is place for resupply, investment or carousing between adventures, focused on faction conflict that offers opportunity and danger,  but it does so without the B-series stalwart’s dependence on a railroad, or mechanics that force certain outcomes.

Mr. Kutalik is a good Game Master (I speak from one experience playing in Marlinko with a one handed elderly thief who really didn’t appreciate the murder-hobo nature of the standard adventure, but his written material is uniformly excellent) of the “OSR” or perhaps “open-world” variety: focused on player driven narrative, emergent world-building, random setting enhancing events and the creation of a game world that offers a wealth of potential adventures without any pre-judgment of character and player ability, goals or morality.  Fever Dreaming Marlinko is a worthy product of this mindset, and written with this style of play in mind - there are no overarching plots, but rather plots aplenty, fomented by a variety of factions and ripe for player character participation, and best none are pressing.  This lack of a pressing timeline and the abundance of other potential adventure hooks are what separate Marlinko from a city themed adventure and allow it to be a city supplement, in that these hooks, complications, NPCs and small adventures await multiple visits and returns by the players.

BACKSTORY AND CITY ADVENTURE
Fever Dreaming Marlinko is a setting book in many ways, it lays out the city of Marlinko, a small walled city that acts as a cantonal capital for one of the Hill Cantons and is relatively near to the Ursine Dunes (of Hydra Collective’s recent project).  There is little historical detail in the product, and none of the sort of history and setting backstory that one finds in many older gazetteer style game books.  This isn’t to say that Marlinko  lacks backstory, only that it’s lightly sketched in the basic setting material and only really comes out through random encounters rumors and detail.

Each of the quarters takes its general feel and purpose from its god: a wealthy enclave (where the characters can frequent bathhouses or engage in tiger wrestling matches), a business district, an industrial slum and the residential district.  Each district has its own important NPCs (usually faction leaders), random encounters and carousing table.  These features, which link well together with rumors, chance meetings and carousing events naturally leading to encounters with, grudges against and commissions from the city’s various important NPCs and ultimately into one of the two smaller adventure locales in Marlinko or out into one of the Hill Canton’s other published (or soon to be published adventures).  All of this detail is very flavorful, eclectically so in the charming, off-kilter quasi Slavic weird-fantasy way that seems the mark of Hill Cantons products. Wizards all have a bit of the insane and preposterous rather than a grave bathos about them, and the random encounters tend to be less dangerous and more charmingly absurd (pedants potentially about theology arguing with an escaped, drugged tiger) but with potential cascades of consequences (killing the sleepy tiger will lead to making an enemy of its owner who runs a tiger wrestling dome).