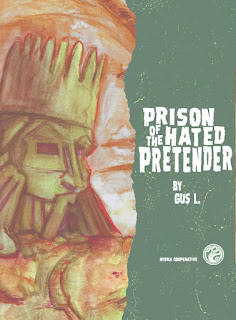 A revised, updated, edited, illustrated and annotated version of my 2012 Prison of the Hated Pretender is now available for purchase and download at DriveThruRPG.  The adventure is introductory, and now includes copious notes on running classic style adventures as well as conversion details for 5th Edition D&D.

Published through the amazing Hydra Cooperative, and available here:

The Hinterlands of Empire

"Men make their own history, but not as they please, not out of the conditions he chooses, but under existing circumstances - transmitted from the past; the traditions of past generations weigh like a nightmare on the brain of the living."

The Successor Empire is sadly reduced by secession, war, conquest, depopulation and decline.

The Central Provinces of Empire, the only ones loyal to the Emperor, and not claimed by naval mutineers, rogue dux, plague cults, Resurgent Kings or the Solar Popes are top heavy with the accretion of the past.  Every foot of ground has been a field, a home, a barracks and a grave at least once, and almost every mile contains some ruined magnificence - tumbled blocks showing the forgotten master-work of a long dead sculptor lay in a field of alchemically altered flowers, poisonous, but in the perfect jeweled tones to celebrate some ancient Emperor's jubilee.

Even in their wounded grandeur, nibbled at the edges by betrayals and crusades, the Central Province alone is larger then most kingdoms, stretching from the polluted crater lands South and West of the Capital to the Blue Meadows in in the North.  Canals and imperishable high-roads radiate from the Capital to run ruler straight across the provinces, surrounded by tumbled stones and monumental arches of bonewhite that still gleam for past victories -  appreciated only by jack rabbits and sparrows for the shade they cast.  Even fertile regions such as Green Hive are beset by internal feuding among their noble magnates and invaders from without.  Pirate princes from the Province Maratime sail ever Northward, penetrating the rivers and canal networks in brazen plundering expeditions while local militias rob traders and each other.  Everyone know that The Empire is sick, collapsing from the decadent weight of its own glory, but the fall has been so long coming that even those who care put off hard choices for years or generations while the Empire dies in nearly geologic time.

Some regions of course are more vibrant than others, and some divisions, cantonments, wards, departments, demesnes or shires are even growing while the Imperial world fades.