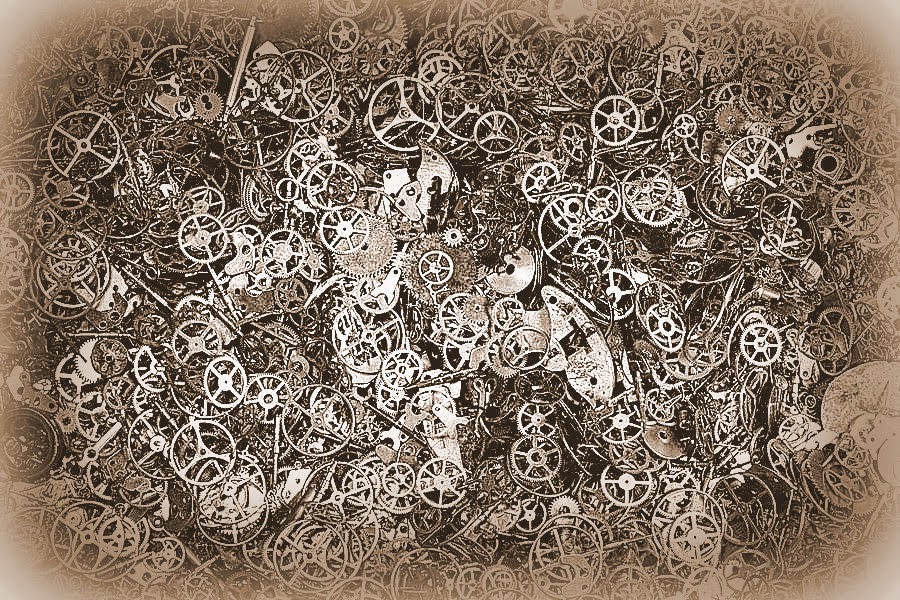 Below is a sample from the Player's Manual I've been preparing for the HMS APOLLYON.  It's not just a look at font and format, but the topic itself may be useful both to players and as a worldbuilding idea.  I think it is helpful for both GM and players to have some idea of what's valuable in a setting, especially as one moves farther away from the fantasy norm.  Players have a tendency to steal anything that isn't laid down, and try to sell it.  For example, in the last game of Wampus I played the party didn't find much treasure amongst the amusingly re-skinned retired adventurer fortress that is Search for the Unknown, but we made up for the lack of portable wealth by smashing up some marble thrones and selling the larger chunks.  This sort of behavior is baked into the Apollyon, and giving both player and GM an idea about what's worth dragging back to the gates of Sterntown is important to the setting.

Only a few remnants of Sterntown’s trade network remain from before the great retreat, mostly with feral human bands and un-pacted Outsider enclaves, but the economy of Sterntown functions, despite the city’s small size, like that of a larger market. Economic survival is partially due to the slowly diminishing hoarded wealth of the Passenger Class, but also because the considerable industry still active in Sterntown is powered by the vessel’s own ever-furnaces and fed by the richness of the raw materials that are scavenged from the hull. Sterntown lacks true factory production ever since the last of the Port machine shops were overrun by automata five years ago, along with Sterntown’s only remaining steelworks, but even ancient and worn the lathes, steam hammers, powerlooms, canning plants and milling machines of its craftsman allow a high level of production and technology. This technology, and the extra-planar pacts of Passenger families, have allowed Sterntown to survive as more than a band of demon-ridden cannibals amongst the dark gangways of the lower decks. The consumer economy of Sterntown persists largely on handicrafts with food preservation and fishing being the only partially mechanized areas of production. The weapons technology of Sterntown no longer allows the production of heavy artillery, or boiler mail in any volume, but it is still formidable.

Despite knowledge surviving at high levels, technology and production in Sterntown is inconsistent and varies wildly. The height of Sterntown’s current military technology - the bolt action “New Steward Standard Rifle” (NSSR – .33 inch), with its well machined parts and durable design, is hugely expensive and individually crafted by skilled gunsmiths from scavenged or recycled materials. Even the NSSR .33’s heavy reinforced cartridges are turned out by hand on powered lathe. For those who lack access to wealth and influence very little of Sterntown’s technological prowess will be available. The children of the rich may have cog-driven mechanical toys powered and animated by pacted imps, and new auto-loomed lace on their machine stitched frocks, but most children in Sterntown make due with their parents’ used work clothes, rags, and a ball made from an inflated shark air bladder.

With the amount of wealth available to the passenger class and still to be recovered from hull, Sterntown uses a gold standard, and a church stamped 3oz Gold Plug won’t buy much more than a night in a Rustgate flop, a bottle of weed arrack, or 2lbs of rat chunks. Luxuries like a single fresh apple can run 25 GP while useful equipment will cost more – with a 2lb bronze fighting crowbar running 40 GP, 20GP in the value of its bronze.

Metal is one commodity that the ingenuity of Sterntown cannot replenish: textiles can be obtained from sea life and the few plants grown on deck or in exposed galleries along the hull, dirt, clay and rock can sometimes be pulled from the sea floor with a long dredge or composted from decaying organics, leather and bone are readily available from domesticated beasts like dogs, giant pigeons, giant rats and various sea creatures, even wood can be grown in small amounts, or replicated with certain types of giant fungus, while metal alone remains rare and precious. Much of the treasure recovered from the lost decks of the Apollyon will be scavenged raw material. The Apollyon’s deck plating, hull, bracings and most bulkheads are all molded from pinkish Orichalcum, an unknown alloy that oxidizes to a blackish blue and cannot be worked by any technology aboard the Apollyon. This “Deck Metal” can cut slowly with diamond saws, made brittle through application of infernal heat or warped with magic, but once its structure is broken is becomes brittle and useless. The overabundance of Orichalum and relative rarity of workable metals make them valuable and worth recovering. For example, the fine Machine Steel of the ancients is worth one hundred times its weight in gold, as while it cannot be replicated, it can be reworked.


SOME SCAVENGED MATERIALS BY WEIGHT