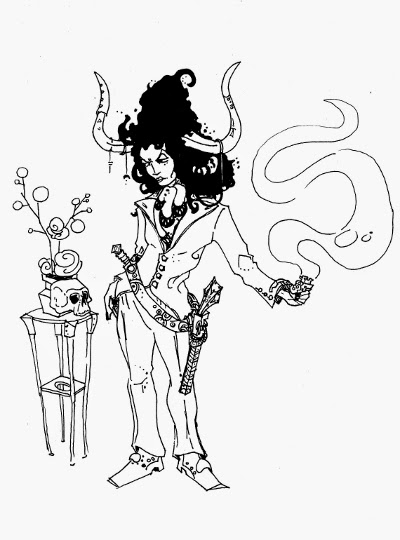 Legerdemain – The skill of fast talk and deception, an individual successfully using this skill may concoct disguises, take on fake accents and manipulate the emotions of their targets.  Successful use of the skill will allow a user to conceal their true identity or disguise themselves, avoiding potential reputation related penalties, and even calm a violent situation (unless combat has already begun) or mend a poor reaction roll.  If a character with legerdemain successfully attempts to manipulate or fast talk their target this causes another reaction roll with a bonus equal to ½ the manipulator’s legerdemain skill.

Reanimation – By investing a greater or smaller portion of their magical energy a necromancer may create and command undead thralls.  By giving up one or more spell slots the Necromancer may empower undead servants, entirely loyal but very unintelligent and inclined towards evil and mayhem.  The basic undead thrall is something akin to a zombie or skeleton, but by investing greater or lesser amounts of power they may be given special abilities and intelligence.  A basic thrall will have AC 17, and one attack with a trained attack bonus structure for Hit Dice.
Skills and Abilities
A Necromancer’s first and most basic spell is Momento Mori, and in addition to this basic spell the Necromancer gains one of the following spells, determined randomly.

Momento Mori
Be performing a short ritual the Necromancer wraps herself in a lasting enchantment, which will endure until a single ‘dissipation’ result on the event die.  Suffused with the essence of death, the necromancer makes undead nearby accepting of her presence.  It is not clear if this is a form of invisibility or simply a charm that calms the angry dead, but undead creatures will generally ignore the Necromancer and any of her own undead thralls while the necromancer is under the effect of this spell, unless they attack or otherwise make efforts to make themselves known.  Sentient and powerful undead (Over 4 HD) may still detect the caster, as if she had a 5 in 6 stealth skill.

In addition to Momento Mori a starting Necromancer will have one of the following spells scribed in her spellbook: