Below is the a map showing Exploration of the Hull.  Currently Only Deck 9 has been investigated. 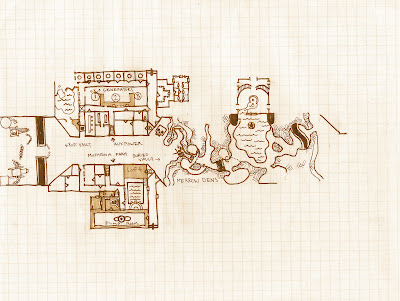 2) Merrow Men - Intelligent, utilize mutagenic flesh sculpting, numbers have been winnowed but are still unknown.  Dwell in caves carved from junk pile in buried vault, and possibly in other areas to the North of it.  Likely very very angry.  May have captives.

3) Sheriff Buck Naked's Men - "Nudist" humans covered in glyphic symbols, some crossdress.  Live above the Southern Stairs (apparently) and have demanded food and metal supplies in exchange for 'safe' passage.


The Current Status of NPC Parties:
1) The Gearmen, Exhalted of the Ship Spirits.  12 Effectives, mostly armored fighters and clerics in good bronze and steel armor.  Some Blunderbuss armed retainers.  Led by Brazen Gear (C1).  After thier recent haul of 1200GP worth of copper pipe the Gearmen have begun to turn the Rustgate storefront church of the Ship Spirits into a real temple.  They plan to raid into the hull some more to gain funds.  There has been talk of Lady Stott accompanying the Gearmen on a tour of the "reclaimed" areas of the mushroom farms.

2) The Sons of Vanderdecken.  4 Effectives, Well equipped in high quality armor and gear.  Led by Marco Templeman (F/MU 4/1) Hiring and recruiting with very limited success after their pitched battle with the Merrowmen.  Obvious reluctance to join them by most of the Rustgate's denizens.  Have hired Hanz the Engineer and given him some armor and a boarding axe.

1) Mechamn and the 'Scavenger's Guild' - Plans for a hall and exchange continue, apparently there's been some success with his map/bond sales and stories of the various scavenger groups exploits.  He's trying to spin the battle with the Merrowmen into a heroic war against evil by paladins of the upperdecks (with limited success - especially amongst the rich).

2) The Vory - Rumblings that the underworld is considering getting in on the scramble for wealth from the hull.  Known Thieves in law seen hanging about Rustgates (usually with perfumed  kerchiefs in front of their noses) and increased activity around Madam Bibi's establishment.

3) The Factors - Trade is picking up (why is unclear - speculation mostly) and talk of retaking the Machine Shops is high.  Funding opportunities may exist.

4) Church - A young priest of The Queen has been seen in the Rustgates and may be looking to buy space for a small chapel due to the increase in Ship Spirit Conversions.  The Gearmen are talking tough - but since the churches are not actively hostile that seems odd.

5)Frogtown - Magicman seems to have a lot of money lately.  He's always been known to be a spy for Boss Wugg, and he was showing off a bound Undine of some size a few days ago, but he's not talking.  Local Frogling Merchants also seem especially close mouthed.

6) Uptown - Party Season is about to start. Apparently scale and fish-like fashion is all the rage - recent summonings have emphasized this.
Posted by Gus L at 10:59 AM