The Price of Total War

This is a Weird Adventures post about Hobgoblins and Hobogoblins, and the effect of PTSD on fey creatures. 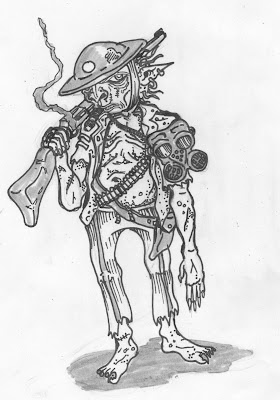 Hobogoblins are a feature of the New World, toughed, rough-living descendents of the various quaint fey of Ealderde.  Everyone knows them to be basically harmless nuisances, so even the ocassional hobogoblin abduction story or murder spree is laughed off by a populace that knows hobogoblins only as dump-dwelling, train-hopping, petty thieves and drunkards.  Yet, like everything else, the great war has cast a terrible shadow over hobogoblins.  Ealderdian hobogoblins' and similar ancestral feys' lives were uprooted and shattered by the war just like the human populations they lived beside.  Hobogoblins were not destroyed by the war, they are survivors and gleaners before anything else, and the gobs of Ealderde soon adapted to harsh war-time conditions.  Skulking amongst ruins, trenches and no-man's lands hobogoblins scavenged from the detritus of war, just as in the New World they collect the cast away product of consumer society.  In the harsh enviornment of the battlefield disorganized, weak and careless hobogoblins were quickly caught in the crossfire, leaving only the cunning, the strong and the cruel.  These remaining creatures mimiced the militarized world around them, adopting many of its ways and fixating on weaponry, military rituals and uniform.  Nor are the powers of Ealderde wholly innocent in the creation of this menace, seeing how the war effected fey, both sides attempted to enlist, enslave and use transformed hobogoblins  for their own ends, enlisting or enslaving whole battalions of the creatures as terror troops and raiders.

Now bands of militarized hobogoblins roam the wastelands of Ealderde, robbing, pillaging, and carving temporary vest pocket despotisms out of what's left of the rural areas.  These bands sometimes number hundreds of members, all of whom refer to themselves as sergeant, because no gob is willing to be a private. Amongst the people of Ludd they are known as "Club-hobs" while in  Staark the creatures are called "Kreigfewalts"or "Teufelshund".  The later name has become the most popular as it sounds menacing enough to suit  these dangerous fey and in the New World is often shortened to "Shund".

Like most of Ealderde's troubles Teufelshund have managed to migrate to the relatively unscathed lands of the Union, and while most humans would simply laugh at the idea of a bands of dangerous hobogoblins, the Garbage Kings do not.  The Garbage kings fear the Teufelshund, because the new gobs are larger, stronger, well organized, and without mercy or fear.  For thier part, the Shunds disdain the current state of hobogoblindom and seek to make it over, blowing up the mongo places and jungles of Garbage Kings and replacing them with fortresses and barracks made of surplus and fear.  The strongest, cruelest Teufelshund will lead the rest, and force them into constant activity - drilling, stockpiling supplies, patrolling and interrogating prisoners. The weakest Shunds in turn look for weaker creatures to bully.

It is rumored that some Shund gangs have taken over small rural hamlets, which now require rescue, and a few of the hobogoblin Kings have begun making  inquiries about hiring assassins and soldiers of other races to defend themselves from these warlike newcomers.

Shunds are the Weird Adventures equivalent to hobgoblins, and can be found both a individual bruisers or bodyguards for hobogoblin leaders or in their own bands.  The most dangerous have gotten access to deadly pieces of military technology, including cannon, machine guns, war golems, and tanks.  The majority of Shunds are armed with a variety of rifles, carbines and melee weapons looted from battlefields.