Wampus Country - Hey I won something! 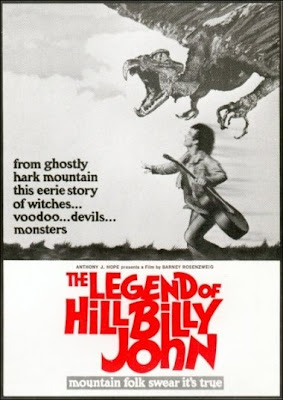 So Eric of Wampus Country had a contest last month, and my submission involving how to die while flying in hot-air balloons battling terrordactyls and escaping angry clergymen happens to be the winner.

Seriously though! The reason I was able to write anything worthwhile is because Eric's setting is pretty amazing.  It's one of those concepts that sound simple, even silly occasionally, but he handles it with a combination of seriousness and frivolity that makes adventuring there an absolute delight.  I think this is because Wampus sticks to the farce of tall-tale rather than the bathos of "Weird West" that it feels fresh and appropriate for a RPG setting.   For example - witches abound, and they're eminently helpful, but also unpredictably terrible; they remove curses with rusting pinking shears (ominously keeping what they cut off) and accept sculpted cakes in the form of babies as payment.  This tone may sound silly, but in the moment that one's character is staring a dapper ghost in the invisible face with only a six shooter full of bullets carved from prehistoric monkey bones, 1/2 blessed by a snake oil salesman of a preacher, it's actually tantalizingly horrifying.

Anyways thank to Eric's groundwork I was able to write something he found interesting.  Check out the blog - it's worthwhile and interesting, a subversion of fantasy gaming tropes that somehow remains true to the spirit of the thing.

When the PDF comes out shortly you can all tell me how I inaccurately model falling damage and balloon movement.  Heck complain about the statistics of the Ugly Bird and I'll even try to defend them -"Silver John is 6th Level!(at best)"- as long as you check out Eric's Blog.
Posted by Gus L at 11:34 PM